Steph is expecting, and she’s finally able to do a baby basket that suits her own taste, and nobody else is going to put a baby basket like this together, so she made it today.

It’s also her birthday next Tuesday and she’s expecting a nice dinner out on the town. Her company Christmas party is on Friday and I expect she will give the basket to her pregnant co-worker. Another great basket, and perhaps the last for a while… One nice thing about staying home on Thanksgiving with no company is having lot’s of time to code. My latest app, fahck.com underwent some dramatic structural changes yesterday and it’s looking and performing pretty good.

My web hosting provider BlueHost has a Thanksgiving half off sale going on so I bought another domain name called wishpy.com for $7.50. Isn’t that cutesy! Now if I could just figure out what the fahck I’m going to do with it…

Click the image below to take fahck for a spin!

We pulled the tin hat off our expensive bird a little late in the process of approaching 170°. It was my call to withdraw it from the oven before it reached that picture perfect brown, and it was a good one as the meat melted smoothly on the tongue.

Steph and I had a fine meal this Thanksgiving with just the two of us. We stayed in our pajamas all day and didn’t have to drive anywhere or interact with anybody. All I can say about this is, it better taste great! I’ll get a shot of it all browned up tomorrow. Happy Thanksgiving! 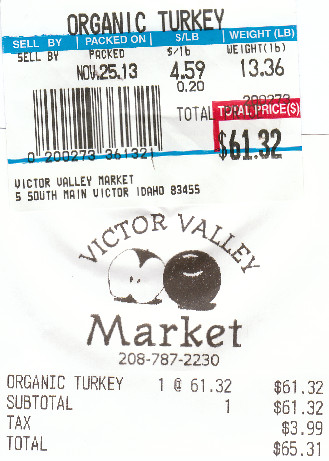 It was about thirty minutes outside of Evanston, heading back home today, when the incident occurred. The morning was warming up but the sun hadn’t quite caught up with it when flashing lights appeared on the road up ahead.

I slowed down and realized it was a school bus picking someone up. I wondered why it was out so early and realized later it was headed to a small college down the road. I gave it plenty of room and we were doing 65 again when an old pickup showed up on my tail, and passed me.

The three of us were just cruising along in the fading dark when the truck slammed on his brakes and I saw the antelope fly across the road in front of him. I hit my brakes, not knowing if there was a herd of them following him.

There wasn’t, and as the sun came up I arrived at Palisades Reservoir:

I drove down to Evanston, WY this morning. It was a peaceful clear Monday with hardly any traffic on the two hundred mile drive. There’s something special about a road trip where each participating unit performs its function perfectly.

My sweet little truck Jill handles the road like a cat, purring all the way. Tomi the GPS lets me forget about the logistics involved in arriving at the destination, I just let her guide me. My job is simple, I just do what I do best, drive… I was playing some song on the radio about burning down a liquor store when I shot these video clips, finishing up with cows in the road. You got to love Wyoming.

It’s fascinating that you can occasionally discover a view of your house that you’ve never quite noticed before. Such was the case this evening as I was laying spread out naked on my back, on the massage table that Steph bought more than a decade ago, as she worked to resolve the pain in my head.

So, back to work on fahck… Ok, here I go again, inventing a new word and grabbing the domain name to go with it. My new word fahck is pronounced as fawk with a little breathyness and the name cost me twelve bucks.

I’ve now created a new website called fahck.com. It’s a five character domain name with character. I have no idea what I’m going to do with it, but what the fahck, it will be unique for sure…

Our local ski resort opened today with a total snowfall of 97″ and a 47″ base. This is a hopping time around the valley with lots of smiles coming from the powder heads and the Targhee buses are running again. Welcome back guys!

It’s been a perfect opening, snow has stopped and a long range clear weather forecast is coming up. I shot this yesterday when I got home, from the edge of our driveway. A box showed up in my office yesterday containing black ink cartridges for my printer. I print out our company documents from here and the company keeps me supplied in ink.

The Rexburg drivers coordinated together to get the box up here and it passed between a few hands. Once the cartridges were removed, it became Pipers property. I guess it’s going to stay here for a while, right next to her scratchpad.

With that look would you dare to take it away from her? When I was sixteen I took the summer off from High School in Paradise, CA and went hitchhiking. I didn’t tell my parents I was leaving so they called the local cops to let them know I was gone. Just a way for my step-dad to cover his ass I suppose, nobody really went looking for me.

It was 1962 and the Soviet nuclear threat hung heavy over our heads with the Cuban missile crisis yet to occur in a few months. I had the attitude that we were all going to die so I might as well see the world first.

One night I was thumbing along the Pacific Coast Highway near Santa Monica and a cabbie who had just finished his shift picked me up. That’s funny because I offer people rides sometimes when I’m out of the bus now. Hey, it’s what we do for a living!

As we drove along the coastline on that warm summer night he pointed to a fancy beach house and said it belonged to some movie star who let President Kennedy use it when he was in town and wanted to get it on with Marilyn. I thought at that moment that I was glad to be there, experiencing life, not just reading about it.

A year later I was back in school sitting in a social studies class when the announcement came over the intercom that the President had been shot. The description of the shooter sounded like my real dad, who was living in Dallas at the time. The teachers were all crying and they told us to leave, school was over. As I walked home that afternoon my brain was swirling. My trust in the government I lived under was dying and it impacted a lot of critical decisions I made later in life.

As details emerged about Oswald I knew it wasn’t my dad, but the pain in my heart never went away. What kind of country was I living in? I had just spent my formative years existing under a Soviet threat of nuclear destruction and my President had the balls to challenge and suppress it, and suddenly he was dead.

As the fifty year anniversary of President Kennedy’s assassination approaches, I reflect on the day sadly. I realize now that my life changed at that moment. My step-dad had no advice to me on anything, and I suddenly became anti-everything.

Welcome to the sixties baby, if you were there, you know…

I have a twelve passenger bus and my daily routine involves driving kids from Driggs to the Community School in Victor in the morning and then bringing them back to Driggs at the end of the day.

Parents know I’ll be sitting next to Barrels and Bins from 0750 to 0815, Monday through Friday, and they can just drop their kids off and get on with their day.

The morning run never stretches my bus capacity but I can fill it up on the afternoon ride back. My dispatch needs to know how many kids I transport so I call the counts in over the radio. I’ve decided to change it up a bit for security purposes so I’m sending them an email tonight as follows:

Effective immediately and lasting through Dec 25 I will be calling in my school kid counts as a function of the Twelve Days of Christmas.

We are currently referring to our customers by their initials to protect their privacy and by using my Twelve Days code system we can obfuscate the actual number of kids being transported.

Please print this list out and place by your station.

If I have ten kids I will simply say Lords a Leaping.

If I was debating the price points of two purchases I made today, the turkey would have won. I stopped by the Victor Valley Market this afternoon and ordered a fresh organic free-range turkey to be delivered next week. The 12 pound bird runs 4.59 a pound ($55).

Earlier in the day I was browsing hotel rates in Las Vegas for the heck of it and ran across room rates of $18.50 a night at the Riviera. I’m traveling south next week so I just had to buy two of them and plus tax it came to $41.

Steph’s boss laughed when he heard what I paid for a turkey. He said I should have just bought a tag, driven to Swan Valley and shot one. Well yea, that would have been the manly thing to do I suppose, but I’m saving my ammo for the zombie apocalypse.

As far as Vegas goes, I’ll be back home in time to enjoy that pricey bird. I was laying on my left side in bed this morning when I felt three distinctive taps on my forehead just above my right eye. I instantly moved my hand to the spot thinking it was Piper or Steph, and nothing was there.

As my mind transitioned from half sleep to fully awake I took stock of my surroundings. Piper was snuggled up to my feet at the foot of the bed, I could feel her through the blankets, and Steph had her back up against mine, no way she could have reached my head with her hands. Then I opened my eyes.

The first thing I saw was the clock on the nightstand reading 5:15. This was 5 minutes past my normal weekday get out of bed time so my body was awake but I was just resisting because it’s Sunday and the house was cold and covered with snow.

I laid there in bed for another hour contemplating the visit and my mortality, which has been heavy on my mind lately. I finally got up, compelled to write this post over my first cup of coffee. My thoughts go back to that Rumi post, when the veil between the physical and spiritual worlds is the thinnest; when all of our angels can most easily brush their radiant fingers across our cheeks.

Today I’ve just hunkered down and worked on my latest program, Symegry.

It’s a good thing this is Saturday and we’re not going anywhere because that drift would bottom out our Mazda’s.