Same old shit, another day. Driving around in the zone, doubling down on defensive moves, checking my blind spots twice, making my living and keeping my people safe.

Writing code at night until 10, putting it out there to no avail, emails launched into the void. Maps to nowhere…

This stretch of Bates Road looks like it could be any crop, but having watched it over the years, I know exactly what it is. This is the scruffy south end of the field and a little further north sits a nice house with a great lawn. It better be, since this guys our local sod farmer. His crop should be ready in a couple of months… 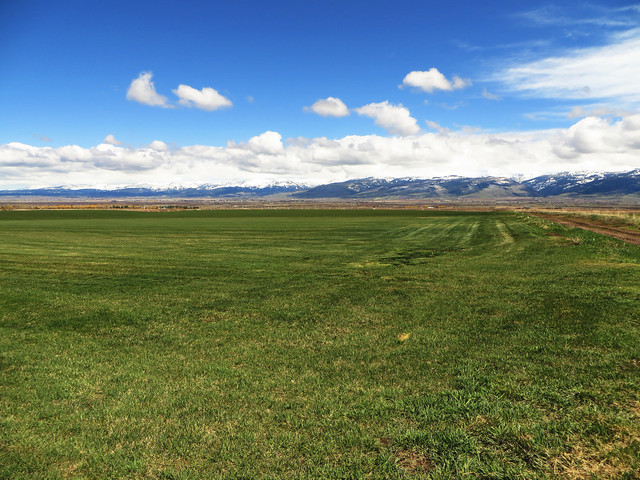 It snowed here yesterday, laying down a couple of inches that gave way to a happy green lawn by sundown. That crap wonderful white stuff doesn’t stick around long this time of year. I walked out back on my lunch break today and took this shot. 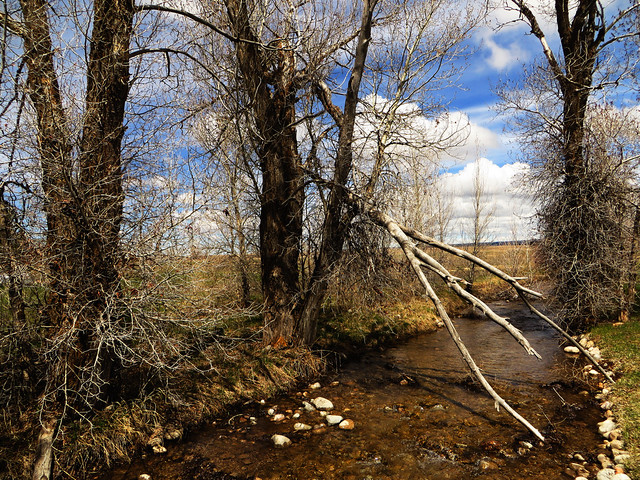 This is a painting I just created from a photo taken recently by the Hubble, of a galaxy many light years away. Do you think they’re trying to tell us something? (original) 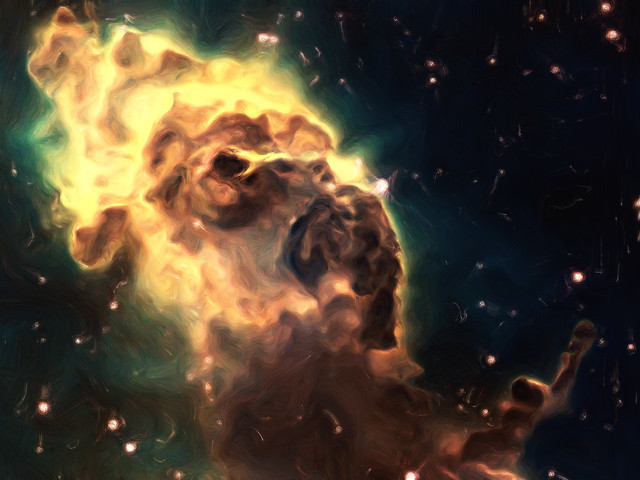 Either somebody hacked Google Maps, or it was an inside job, but an Android character has shown up on a map in Pakistan, peeing on Apple. It’s gone now, but as your resident map guy, I captured it! (original link) 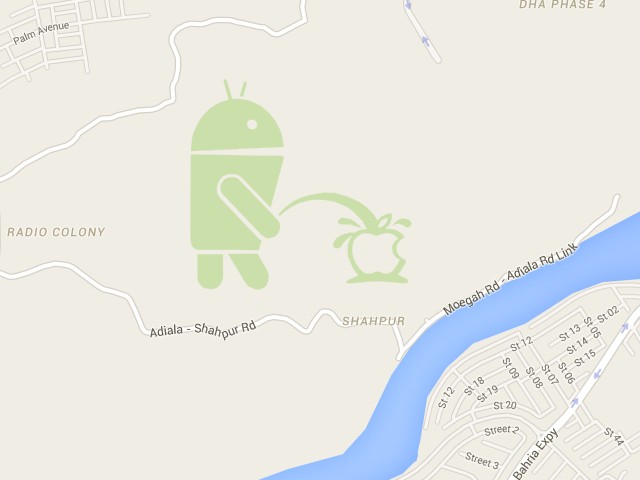 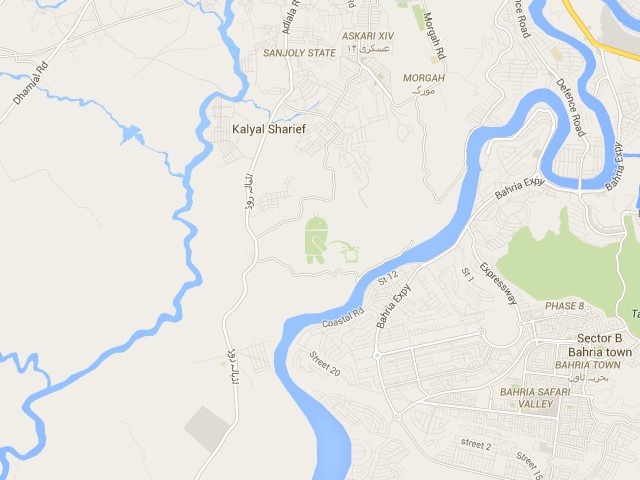 Update: Google has said the image was probably created by a user abusing their Map Maker program. Whew… that’s a relief!

My new little friend arrived today. I initially thought I would just set it up with Stephs email and Facebook account and hand it off to her. Hmmm, rethink in progress… I’ve been playing with this thing since I got home and I’m tearing myself away from the process, to put up this post.

It’s pretty slick. When I freed it from it’s box and introduced it to my wifi it came alive, just like my other Amazon devices have done. They send my profile information through the box as it’s being shipped and it knows who I am when it arrives. I love that!

It’s not a normal Android device, but the OS is fairly intuitive. It’s locked into all of my Amazon content as expected, I setup my Gmail account quickly, and added Steph as a user with her own account info.

Then, diving into apps, I discovered a couple that control my other two Amazon devices. Really, my head is starting to spin. I’m now controlling my Fire TV and my Echo with this little device. I can ask Echo a question, or request some media, and she will now wake up the tablet and present a visual page to accompany her answer.

Is there a point where a man becomes over-connected or should he just revel in the fact that he’s still alive to enjoy it? 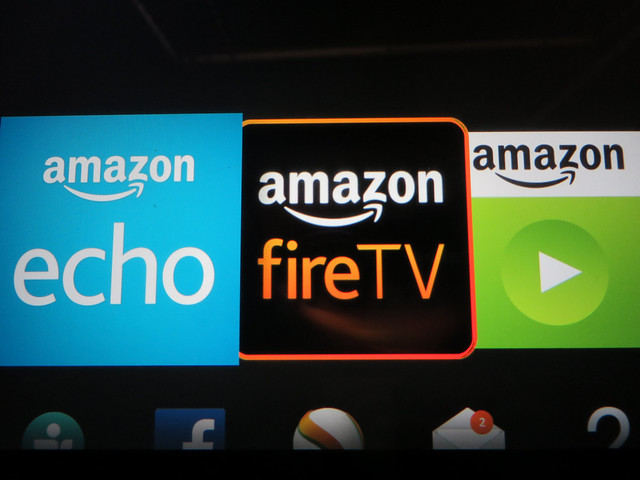 I have to confess that I’ve fallen into Amazon’s insidious trap, one that Bezos and his gang conceived years ago to which they gave the name Prime. I’ve been a Prime guy for quite a few years now and I’ve enjoyed the free two-day shipping, the free streaming movie and audio content, Stephs ability to use it since we’re in the same household and yada yada.

The insidious part kicks in when they send you an email offering their latest electronic gadget at half price for Prime members only. That’s how I ended up with my Fire TV at the front door two days after it was announced and the same with Stephs Fire TV Stick.

Even more insidious is when they announce a new device that won’t even be available for three months but if you jump through a bunch of hoops to get an invite and order it immediately when you’re accepted, you can get it at half price. btw: I love my Echo :-)

Their latest gimmick is to not even ask you if you want to re-up your Prime subscription when it’s due, they just take the money right out of your bank account once every year now. They know you’re addicted and won’t complain.

We’ll, I’m standing firm now, no more Amazon devices in this house just because they’re on sale. Wait, what’s this! An email from UPS has just arrived reminding me that my Amazon Fire HD Tablet 7 will be here tomorrow. Oh yea, I remember now, it was a one day sale with $60 off. Hey, $79 bucks with free shipping… 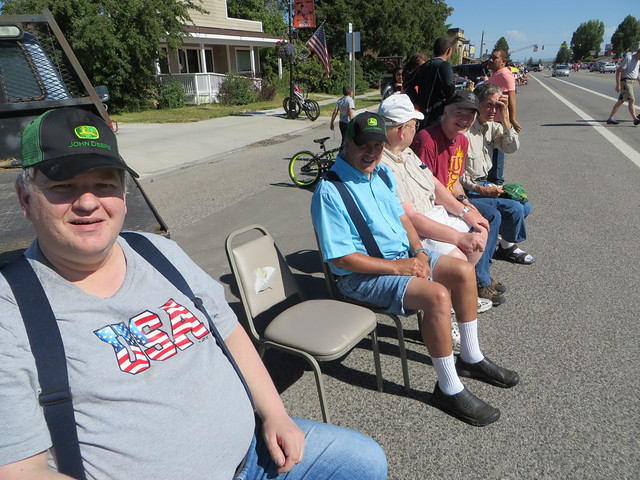 I lost a friend today. Kendall, member in longtime standing of the Joshua Smith group, aka The Gang, has died.

He stayed home last Friday, apparently with the flu, which struck me as odd at the time since we’re through the flu season. When Monday rolled around I was told that he was still sick and his caregiver Clint had taken him to the hospital.

Kendall had been throwing up a lot but he was able to walk into the hospital on his own. He suddenly had trouble breathing so they laid him down on a table, stuck a tube down his throat, and he died right then and there. Resuscitation was futile.

I got the news this morning and I’ve been driving around in a haze, thinking about Kendall as a poet, a singer, and a man with a great, deep voiced laugh. When he gave you one of his hand-written poems you knew it was created just for you alone. When he sang loudly from the back of the bus I would tease him saying Don’t make me call 911! I also called him Ken Doll all the time, and to his credit, I don’t think he ever really got the joke. r.i.p. buddy, you will be greatly missed.

I’ve been driving these guys back and forth across the valley for ten years now. The memories formed from a couple of thousand trips across Teton Valley, in snow and sun, are priceless to me. I love my gang.

We just caught a pretty nice day around here and it forced me away from code. I grabbed my Echo, my cat, and a cocktail and headed for the deck. Alexa really belts it out when I ask so I was dancing half naked under the sun today.

I also wrote a great program this morning that consolidates all of my JimsMap projects, and Steph liked it so much I created a new domain for her: stephsmap.com so she can maintain her Suburban customer accounts, with location mapping. 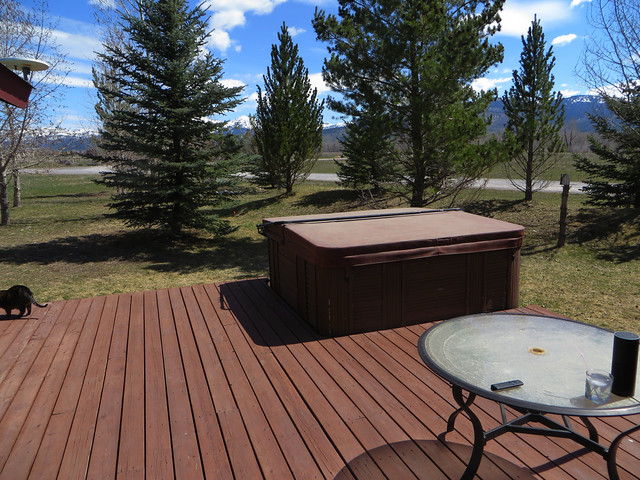 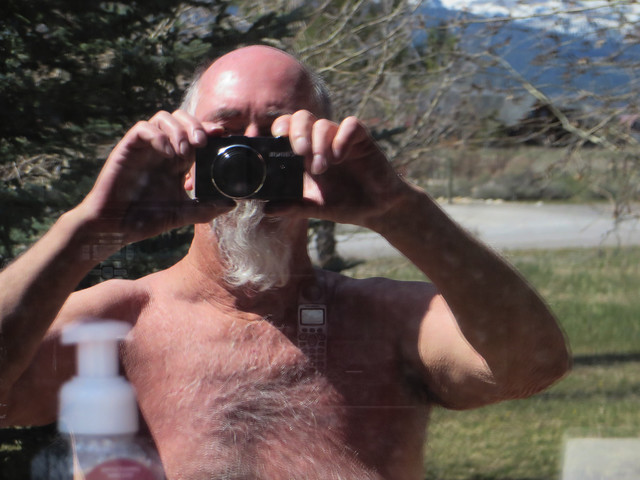 I even added some base code to emulate hover, by pressing down and holding for a second, for my mobile tablet users.

The Big Hole barley farmers are ready to transform their vivid brown soil into fields of gold. A couple more shots available with a click below… 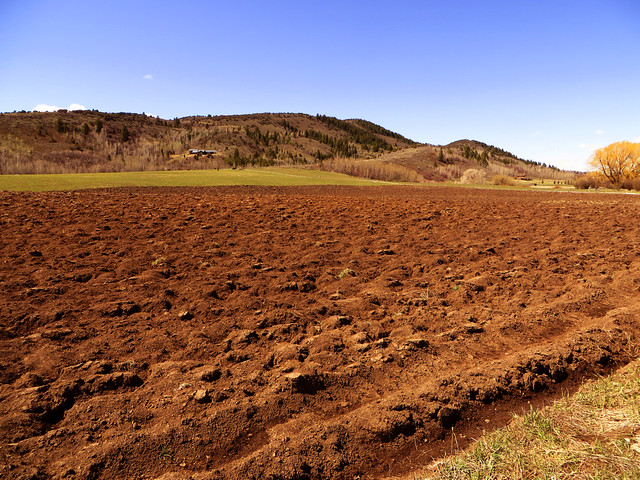 I walked up on the Driggs Skate Park yesterday and grabbed a couple shots. The place has got a pretty cool look, sort of alienish I think. 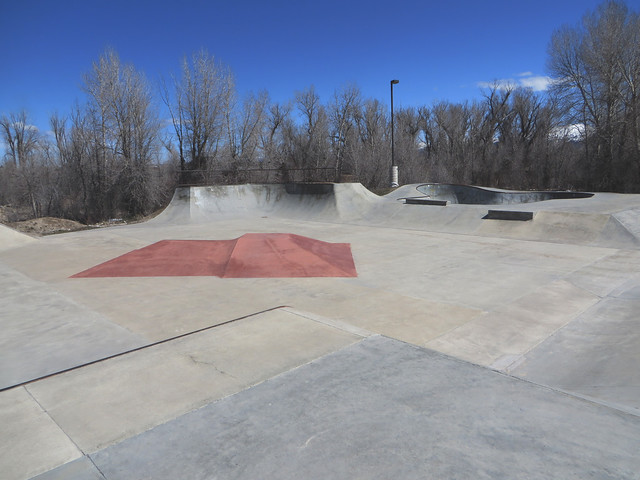 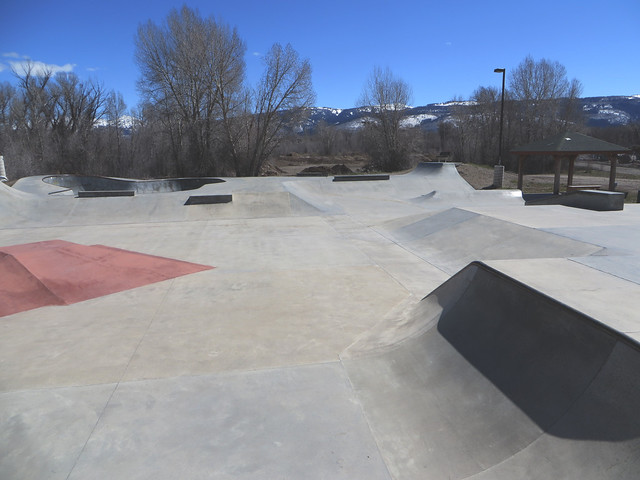 I was reading an article this morning about how the Earth gives off low level rumblings and vibrations, below what humans can feel and hear. It brought back a flood of memories, that I thought I would share here.

When I was a kid (around seven years old) I lived in a very small town (thirty houses) on the side of a Sierra Nevada mountain. My brother and I were free spirits that hiked everywhere, ran with the deer, and listened to the mountain. Family and friends thought we were crazy when we talked about it, but apparently we were the only ones that heard and felt the vibrations coming up from our feet.

Later on as a young adult I was visiting with my dad’s side of the family down in Texas and I was hanging out with a bunch of my cousins. They set up a game that they were quite intent that I play in which I was blind-folded while they they stood silently around me in a circle. I was told to extend my arms and fingers straight out and slowly turn within the circle.

I felt them. As I moved I could feel the vibrations of their bodies and I could detect their shapes, on the tips of my fingers. I kept moving out from the middle of the circle and tapping each one on the chest muttering oh my god.

There were some other things they had me do involving sensing objects on a table, but it’s clear to me now, they wanted to know if I had the same hereditary ability that they all had.

I can’t really say how this has played out in my life, it’s just something that’s always been there and I’m sure has affected my interaction with humans, and all of the other entities in our dimension that I’ve encountered.

I’m not complaining, I’m just observing, and I’m thankful every day that this ability has not done to me, what it did to my brother. His apparently was stronger, and eventually drove him mad.

I noticed a sign laying up against the fence at our base today. I walked over on my lunch break to check it out and I was impressed by the construction. Unfortunately, I couldn’t see the other side so I walked around the building, past the skate park, and… 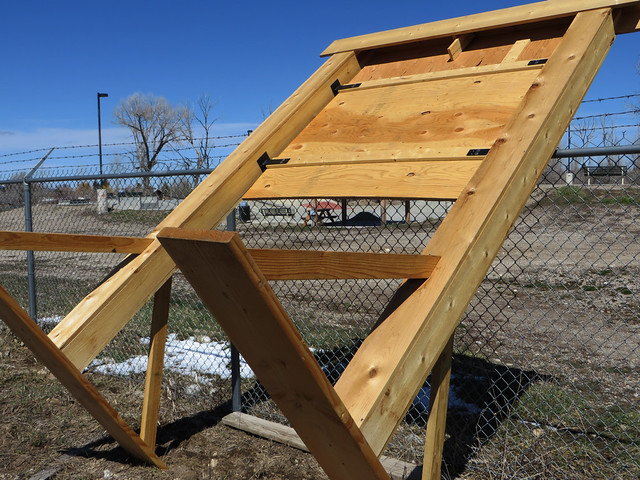 Ahh, it’s that very cool sign they had out on Ski Hill for a while, showing tourists coming down from Grand Targhee some local destinations. I thought the goal was to have them all over town, but now the pilot sign is just leaning against the fence. 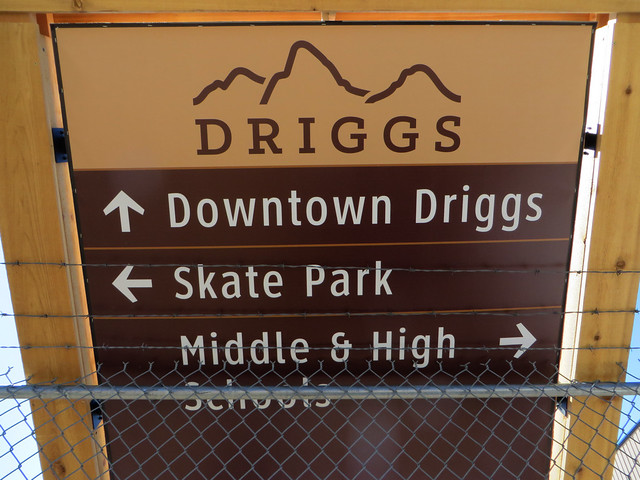 Oh well, I got some cool shots of the skate park, which I’ll post tomorrow.

I dropped a young lady off at a dog breeders place on 4000 S in Victor today. When I came back to get her later I was met by a harmonious chorus of barking Spinone’s. This place breeds these popular hunting dogs, and from what I’ve discovered with a little bit of research, they’re pretty cool dogs.

There’s a lot of barking in the video below but I sensed no hostility, just dogs saying hello to a big white bus they normally don’t see in the driveway.