Jack introduced himself to me on a hot day on Interstate 84, due west of Boise, Idaho, six years ago. We were coming out of Ontario, Oregon where he just had his new boxed 350 engine installed. We were flying down the road, burning it in, when he spoke.

It’s a strange phenomenon, but some vehicles go right into my brain and say hello. I’ve also had some that absolutely refuse to identify themselves. If you follow this blog, you know our other vehicle is named Lucy. A very sweet girl :-)

So without further ado, meet Jack: Update: Forgot to mention that he’s a lifted 1979 Chevrolet Silverado.

My new truck has announced her gender and name to me. Meet Jill!

Big Jack is heading back to Seattle with Riley at the end of the summer, so I’ll have two girls, both Mazdas, hanging out in the garage this winter. (Lucy is my other Mazda :-)

In the meantime, Jack has a playmate. When Jack and Jill went up the hill to get that water, did they do so as siblings, friends or lovers? Answer: The roots of the story, or poem, are in France. Jack and Jill are said to be King Louis XVI – Jack, who was beheaded (lost his crown) followed by his Queen, Marie Antoinette – Jill – (who came tumbling after). So they were lovers.

Posted on Thursday, June 21, 2012 by Jim
Poor Jack, he’s really dirty, tires full of sand, birds are crapping on him and then Steph throws every loose branch and twig on the property into him. And now we have nothing to burn in the fire pit!

Piper was hiding from the sun today under Jack. Why is Jack in the backyard? No room at the Inn (three vehicles don’t fit in a two car garage…)

My truck Jack has only been stuck once, and this is the spot. It happened several years ago when Riley came up from a Wyotech break in Laramie with a couple of buddies.

He wanted to four-wheel up in Teton Canyon so I tossed him the keys. Half an hour later he called me saying they were stuck. Turns out they went flying around this corner, slid into a six foot snow bank and bottomed out bad. We drove up and rescued the boys. :-) So what does Riley do this last weekend? Bend (break?) a tie-rod out wheeling with the Pacific Northwest Jeep Club! At least he wasn’t stuck :-)

I’m trying to sell my great old truck Jack. He’s a lifted 79 Silverado with a low mileage boxed 350 in him. Here’s my Craigslist Ad and please send it on if you know someone that might be interested! I’m letting him go for $2,500. Here’s Jack’s blog post.

If you’re nearby Driggs, he’s currently showing off in Broulim’s  parking lot.

I was waiting to hear back from TRPTA this morning about going back to work, when I got a call from an interested buyer regarding my truck, Jack. There have been several people drooling over this truck, but this guy just bought him!

He’s a trout fishing guide, works Search and Rescue over the winter at Targhee and his sweet dog is an avalanche rescue dog. Jack couldn’t have gone to a better home.

I was really missing my old truck last night. He’s been part of my immediate family for more than seven years and we certainly bonded. Jack was a hard worker around the house and a fun guy to go 4-wheeling with. Riley even got him stuck in the snow once! My old truck Jack has been making his appearance around town lately after hiding out for a couple of years. Driggs Tire just put some new quality snow tires on and he’s also getting some mechanical work done.

I get sellers remorse everytime I see this truck but it was for the best I suppose. After getting the Mazda as my economical travel truck there was nowhere to park this big old boy and he would have spent the winters out back, in the snow. And, at the time I sold him, gas was sky high and ten miles to the gallon wasn’t cutting it.

It’s great to see him getting fixed up and his legacy continuing on! 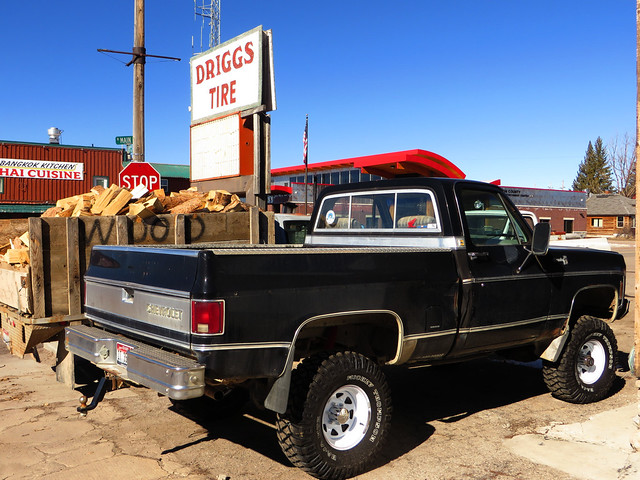