It was a fitting sunrise this Halloween morning. 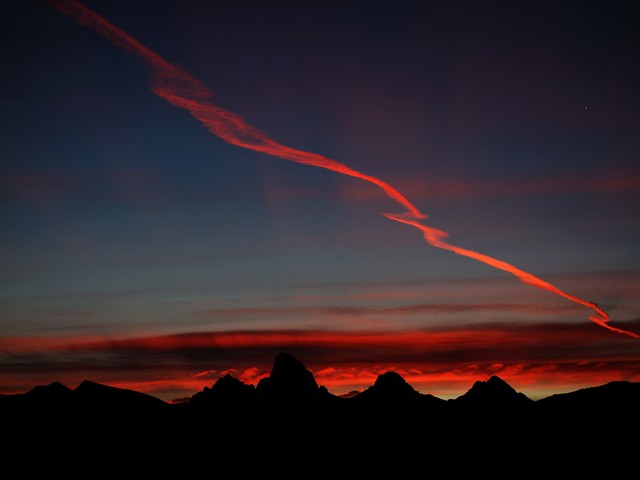 …and that dot upper right was in a dozen other shots I took. Here it is up close: 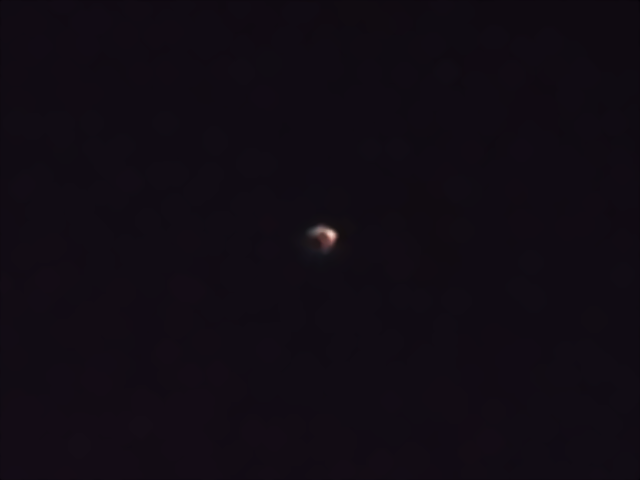 …and Broulim’s slipped in some blood oranges that only one who buys an orange there every morning would immediately notice. 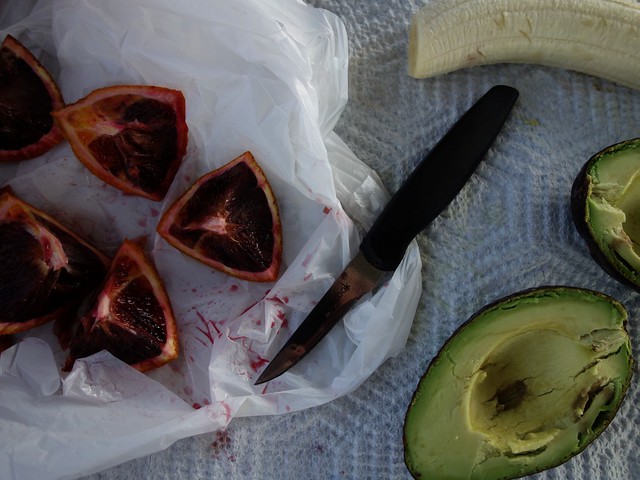 The new house between my nephew Brian’s and our place is going up quick. They have a basement, which is pretty cool, and the well is being dug. Click the photo below for a closer look… 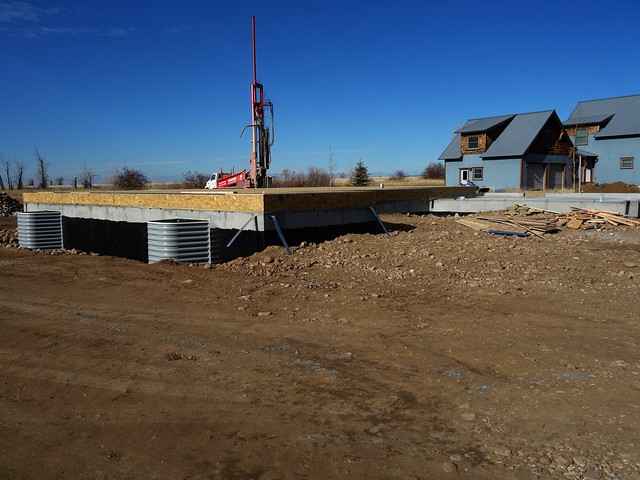 I’ve got a little old lady client that lives out by the Big Holes and she comes in for Senior Meals frequently which affords me a fine drive with great scenery. Today was amazing with air quality most people only dream about. I was a little early so I took some shots along the way. Click the one below to see more… 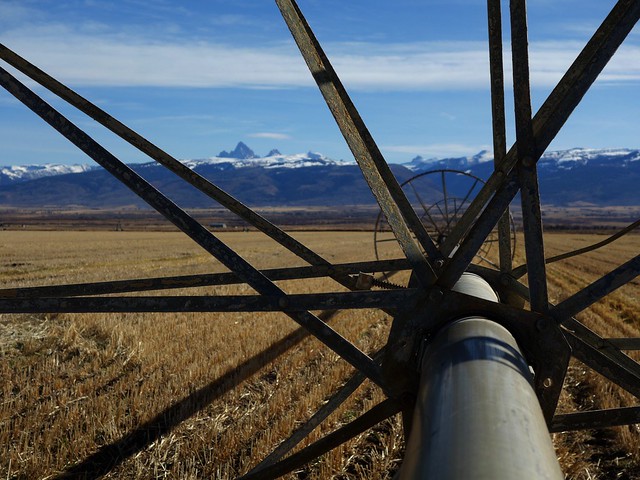 Every weekday you can find me here around 1450 waiting to swing around the corner and start my afternoon kid run. It’s always very yellow here this time of year. That’s the Victor Music on Main stage and if you peer through the fence you can see the Elementary school. There’s also a great Wi-Fi connection from the nearby library… 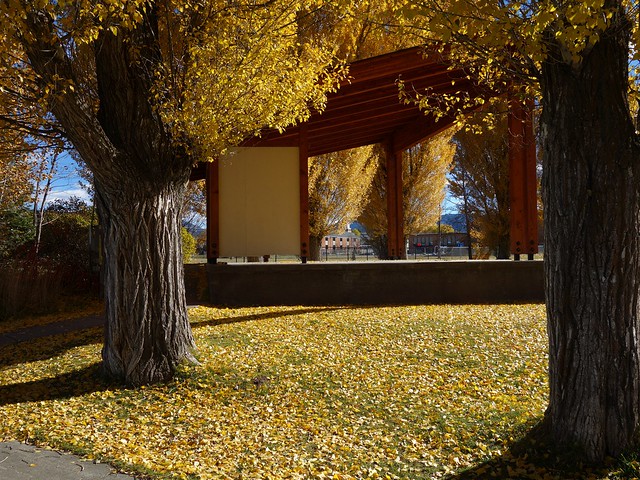 Pioneer Park is on the East side of Victor and it’s been around for a long time. It has a great playground, a bike park and it’s the place where Victor keeps their school busses and we keep a couple TRPTA busses there. But wait, a name change?

If you tell a local now to meet you at Sherman Park they’ll just scratch their head and say huh? But, at least they will Find Joy trying to get there… 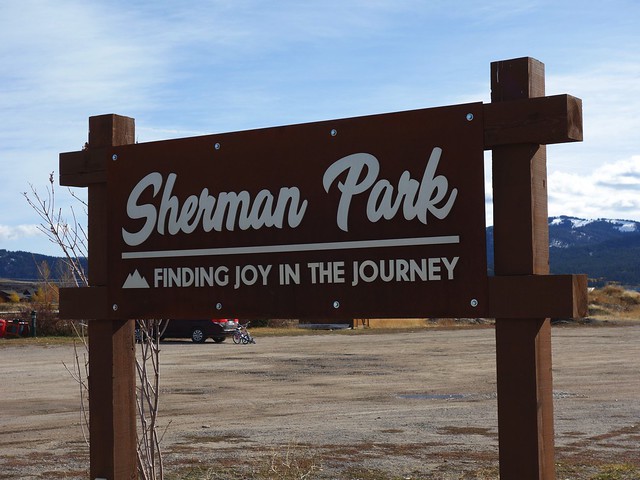 I’ve been staging at the Trout’s Ranch subdivision clubhouse lately before my first pickup. It’s quiet, there’s a great parking area, a nice little pond, and my Hatches Corner turn is just down the road. 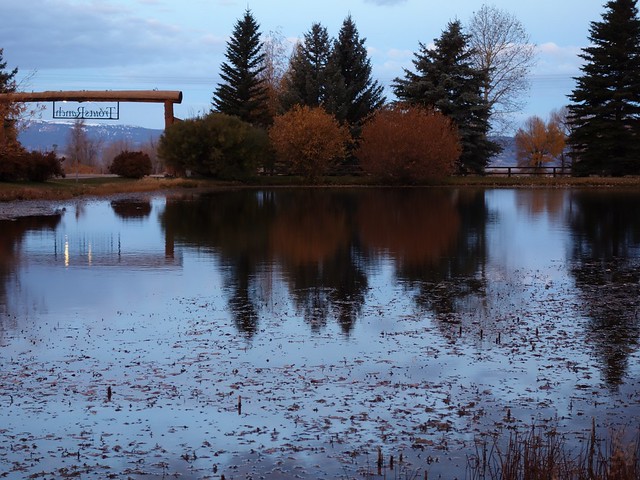 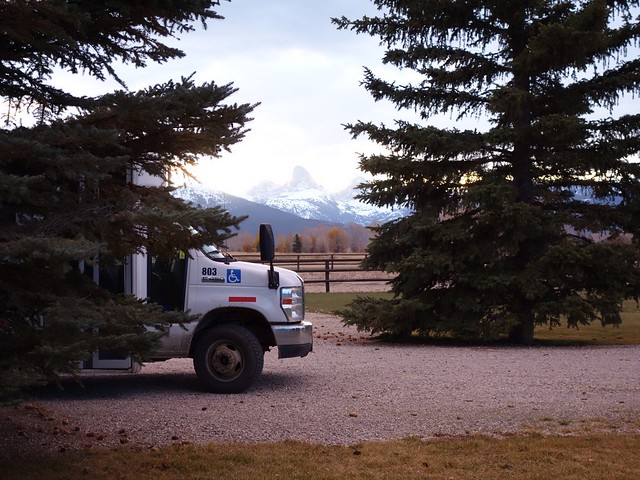 I’m about to enter the next dimension. My computer is ready, now I just need to select the Virtual Reality hardware required to get there… 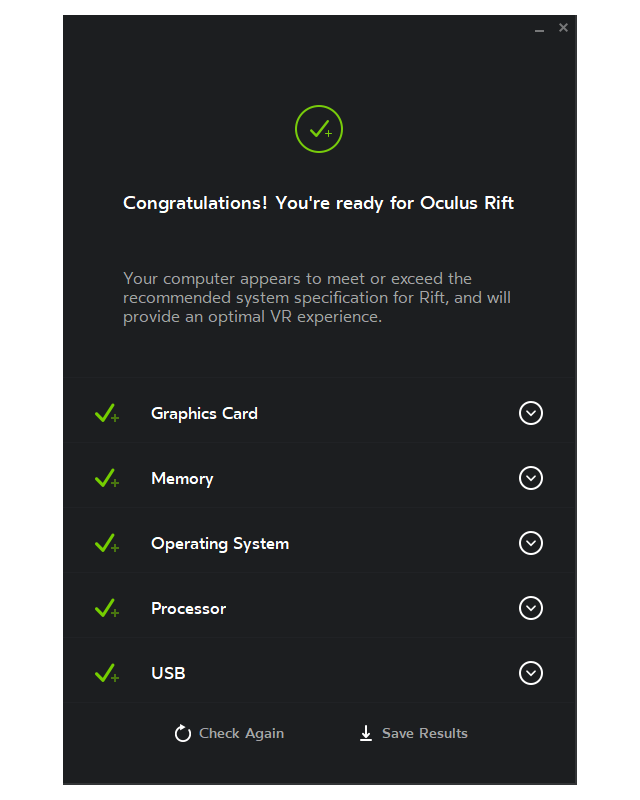 As Winter approaches I usually pull the camping stuff out of my truck and put the six sand bags down on the bed. Combined with my Hankook snow tires she handles the snow great. This year I may do some Winter traveling so I’m going with the best of both: bags and bed. I’m only loosing 3.5 inches of space inside the canopy this way. 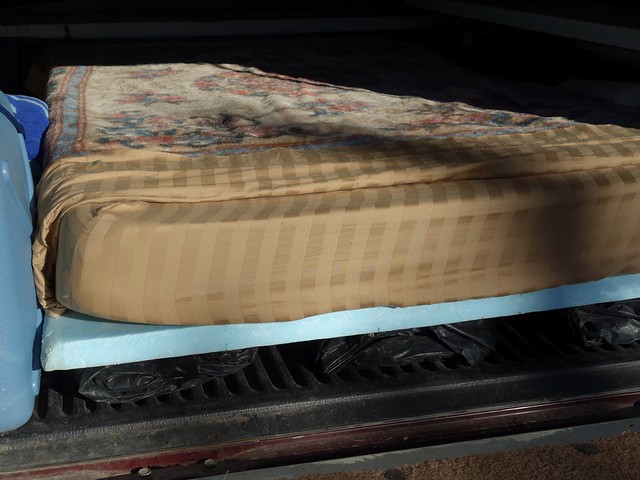 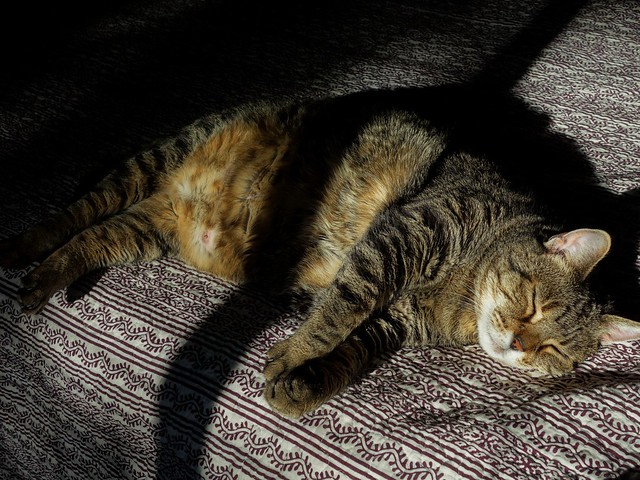 In the seventies and eighties I was one hell of a coder and as I look back on those times I realize I didn’t know how really good I was. My life was just a blur of creativity fueled by booze and drugs, the results were amazing, and I just stumbled along…

Over the last few years I’ve been keeping up quite well with the state of the art in web development. I mastered all the tools and developed some great code. I kept buying cool domain names and stuffed them with ground-breaking apps, hoping that by throwing them up on the wall of the internet, something would stick.

Nothing ever really did. I suppose it’s because I’m a coder not a marketer and profit was never the objective. I did place second in that Sunshine nation-wide government app contest but all I got out of that was a trip to Phoenix and a few bucks.

Just recently I lost pretty much all of the major code I’ve developed over the last decade. My HSP BlueHost let me down with a malware attack they weren’t willing to fix, and I failed to grab the MySql data in time.

I have accepted that. All I have left is this blog and the apps within it. I’ve moved to a new HSP and busdriverjim.com is the host for everything remaining.

I told Steph the other day that I was done writing code. I would just focus on this blog and post things for my viewers that hopefully they would find interesting. Today, so much for that…

I managed to recover a .csv file from my hard drive that contained my city database, so I rebuilt it on the new server. Then I wrote an app today that generates a random U.S. City. Old coders never die and if they say they do, they’re full of shit.

Piper’s getting old, and she’s fat. Getting up on my bed at night, (and in the morning and in the afternoon) has been increasingly more difficult for her, so Steph bought her some Steps. I’ve been experimenting with other solutions but I think this is the one.

Usually I hear her jump from the treadmill to the bed at night, and one night I heard her crash-land on it, but I didn’t last night so I’m assuming she just walked up the steps. 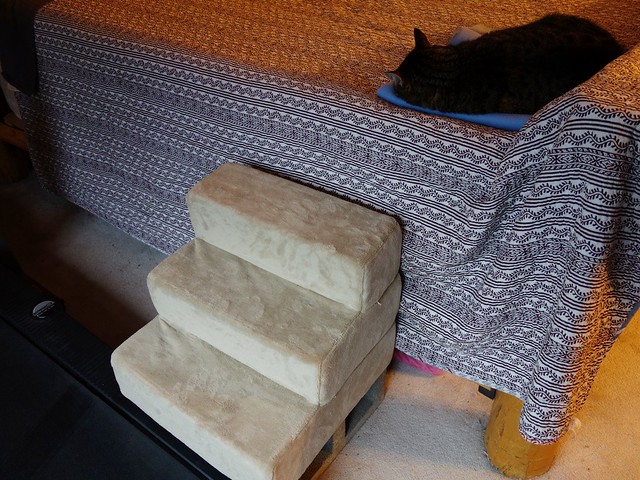 I lived in Santa Rosa, CA back around 1980, in a house surrounded by trees in a rural area, so there’s a chance it’s gone now. My friends Skoge and Grant live in Petaluma which is down the road and I reached out this morning to check on them. Here’s Skoges report from the heart of the action:

Have you seen the pictures of Santa Rosa? It's sad. So far the Santa Rosa fires were started by an exploding transformer in Mark West Springs (the Russian River/Guernville road. MWS aka Wikiup is gone. Large mansions, middle class homes, all gone. The Hilton on the hill near Wikiup burned down. That moved East and now Calistoga has been evacuated, the whole town! The fire jumped Hwy. 101 and headed towards the Russian river. It was a windy night so the embers set off clusters of total devastation along 101. Some went up the hills behind Santa Rosa and over to Silverado Road, down to Napa, as well as Sonoma. I'm on fire watch here tonight... I mean morning. The only thing between us and the Sonoma fire is Sonoma Mountain. It was windy this a.m. but it was Southeast so it went toward Napa and now the fires are coming down in 3 or 4 different directions on downtown Napa. We had a evacuation alert that anyone East of us should be prepared to get out if the wind changed and it came over the mountain. The smoke is worse than the air in Beijing, China, and the worst recorded here. I packed a few boxes of things that mean things to me, and medicines, valuables, pictures, and some clothes so I can load up the car if we are told to get out. It is in American Canyon and now Fairfield. I don't think we'll get hit today but it all depends on the wind. Otherwise, we're all fine as long as we stay indoors, with the windows shut.
Thanks for asking.
Skoge 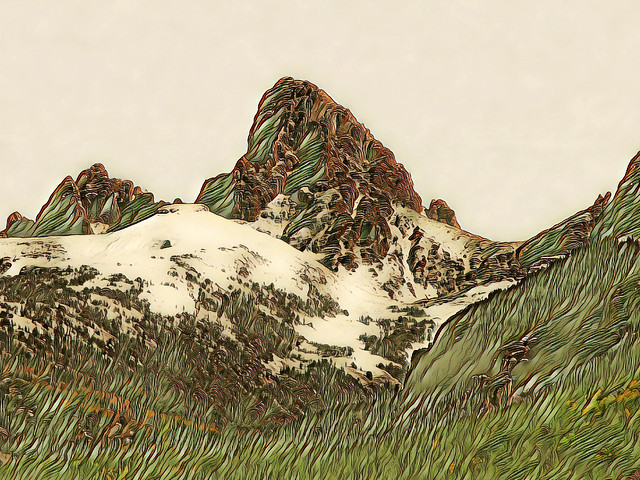 I lost more than ten years worth of database development during the recent event with my previous HSP, BlueHost. Many of my programs were based on carefully crafted MySql tables ranging from U.S. Cities and Counties down to local businesses.

I’m going to be on the phone today to see if they can be recovered from an old BlueHost system backup, but in the meantime I’ve removed the database requirements from a couple of local apps and you can run them here if you like. 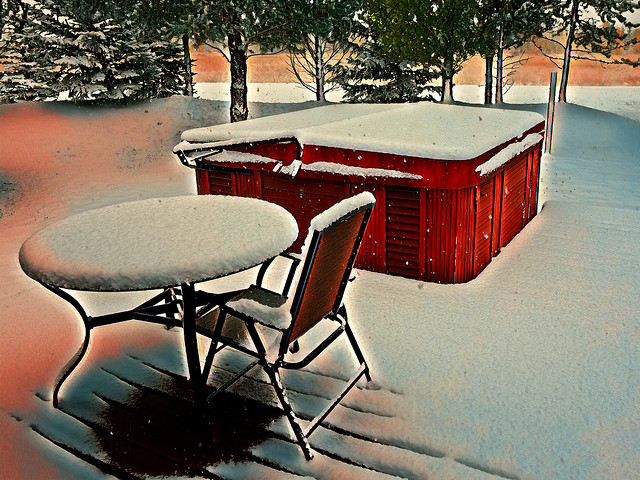 Steph and I have the same discussion every year. I always say leave them on the lawn and she always says something like mice will build nests. Hey, that’s why we pay the big bucks to fatten up the cat over the winter, gives her energy in the spring to hunt!

I never prevail in this discussion and Steph always rakes them up. At least I can dodge that chore by stating indignantly, well, you know my position… 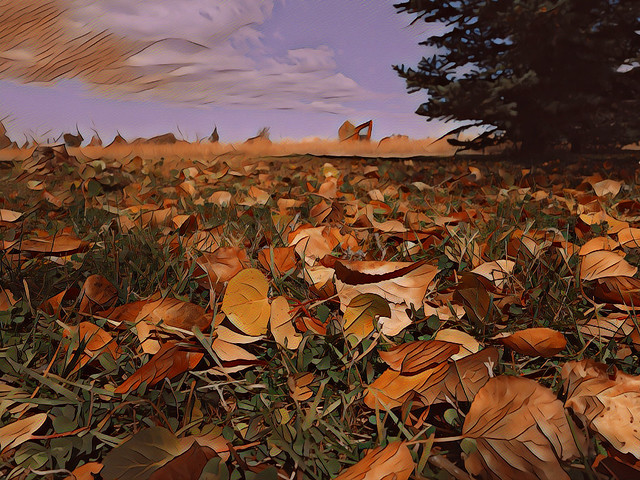 After all these years, someone’s finally building a house on our side of the subdivision. I’m sure glad they’re next to Brian and not us, Piper don’t like it! 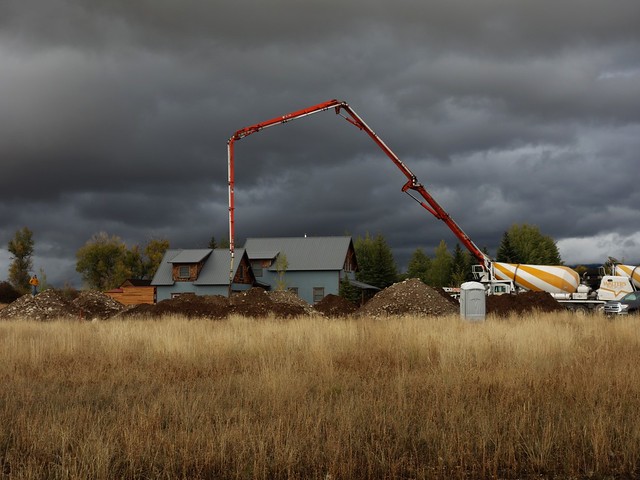