I was zooming around the Mohave desert tonight, near Death Valley Lake, and I spotted this thing. There were a few of them scattered out over a hundred miles or so but this was the most interesting. You can see it for yourself here. 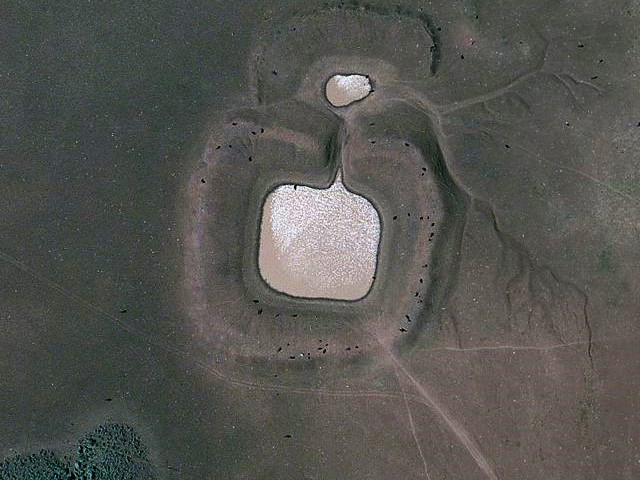 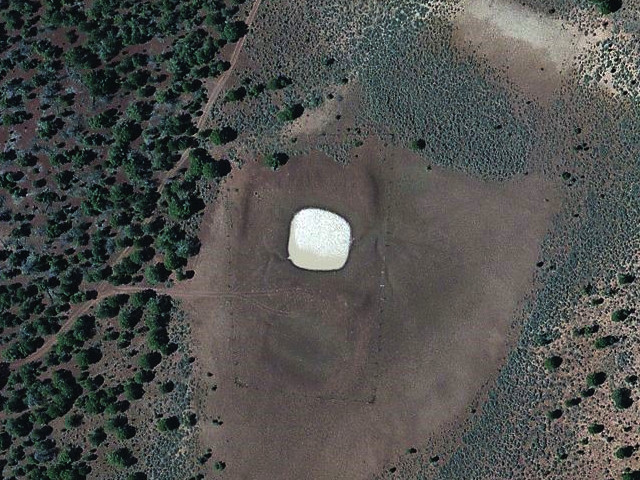 Ok, here’s that program that’s taken up a lot of my time lately. If you would like to run it, click here. The little question mark slide bar on the left, explains it… 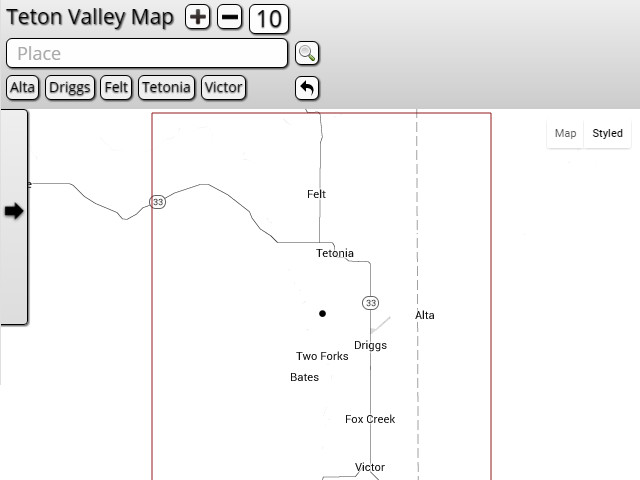 Nothing says welcome to the family new baby boy from Cat and Dave more than a handmade Mickey Mouse Puff Quilt by the talented crafty Steph. She’s off to the baby shower tonight with this creation and I suspect it will be a hit! 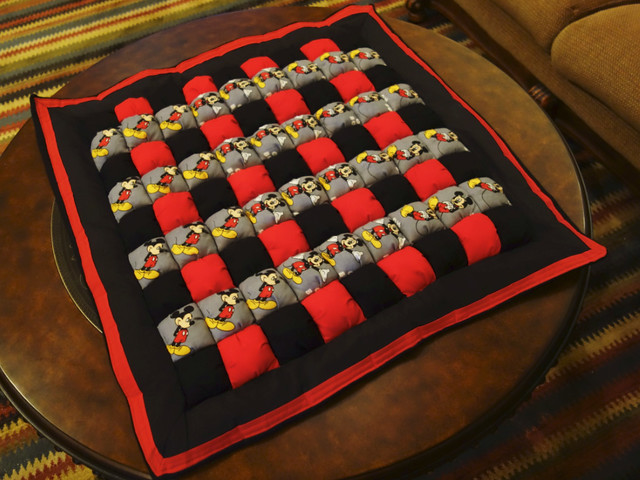 I really hate the loss of life. I don’t kill life myself, as much as can be avoided. I have never killed a human, I have never hunted an animal other than shooting a few birds with my .22 when I was a kid, and a woodpecker that Steph coerced me to shoot a few years back, and lately it’s difficult for me to kill an insect.

I heard a deputy dispatch a deer tonight that had been hit by a car, on my scanner. He calls it in as a shot fired, and often his buddies come out to harvest the meat. Nothing wrong with this, just sad…

When I drive to work in our low-light twilight mornings I move at 35mph in a 45mph zone. I’ve managed to dodge a lot of pretty deer as they fly across Ski Hill road in front of me, only hitting my mirrors once.

It’s been pretty nice and relativly warm around here lately, a transition period I call sprinter (half way between spring and winter) and there’s still a lot of snow on the ground. I was out in North Tetonia this afternoon and took these shots of a snow pack that’s not going anywhere soon. 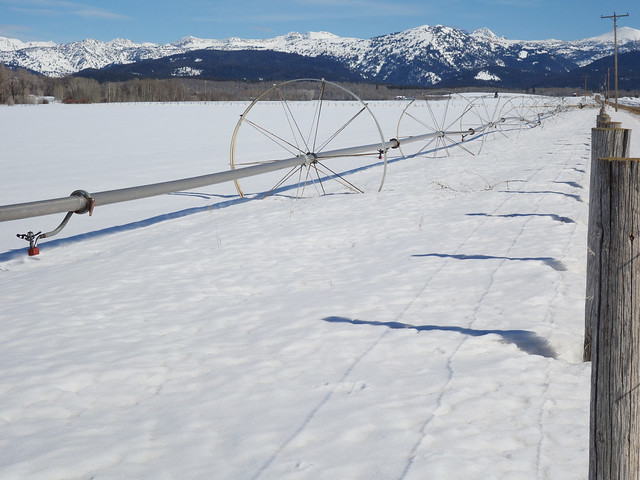 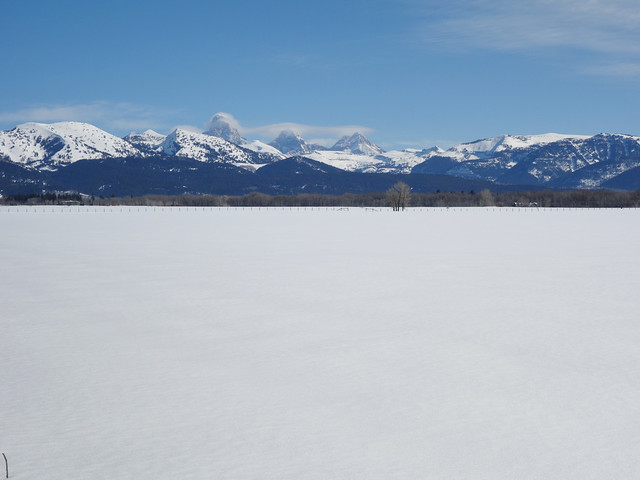 Fresh out of a computer science degree in the early seventies I went to work for a medical billing company in south Oakland, CA. It was a Cobol shop and my first assignment was to flowchart and document the concept of Level Breaks. I won’t bore you with the specifics but it was a technique I carried on to a very successful career through the seventies and eighties working with IBM mini-computer systems and RPG 3. Tonight I brought back some of those old techniques as I processed my carefully crafted 10,000 element database of Teton Valley addresses. The results are amazing and I can’t wait to introduce the new program.

I’ve been using the busses cup holder for my scanner these days, with no place for my coffee. I’ve figured out a way to use the usb cables plugged into the charger to support the coffee cup. It works great! 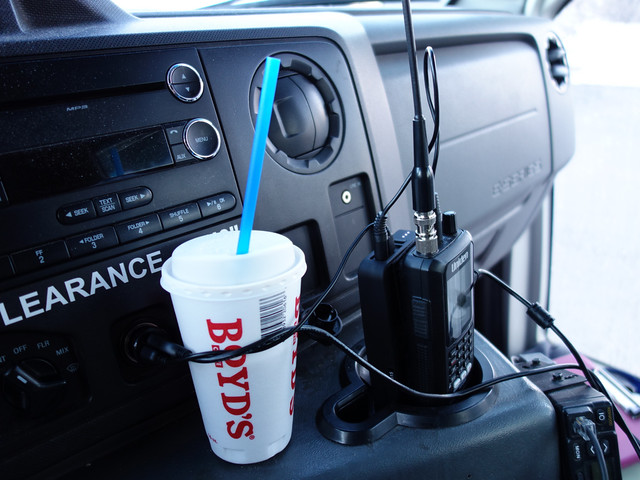 … and the sun is coming up right behind the peaks lately: 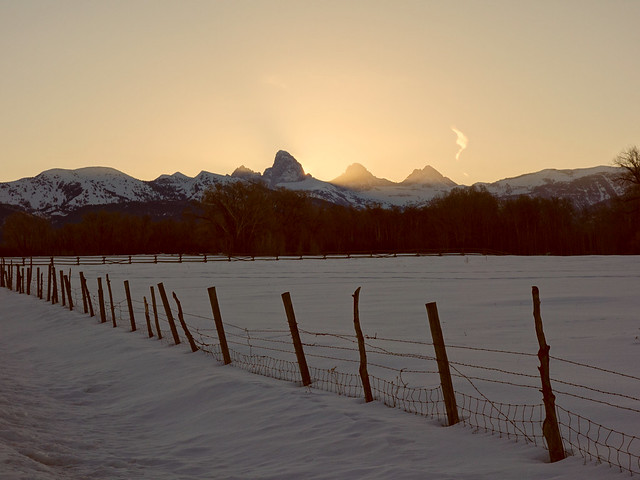 Everything I do on my bus during the day is videotaped, in three dimensions. There’s a cam pointing toward the passenger door from above the drivers seat, a cam pointing back towards the entire seating area and one pointing directly at the lift.

I can’t pick my nose or scratch my crotch without running the risk that it might ultimately be on YouTube. Our safety and training guy was up here last week and showed me a video taken from these cams of a couple of ladies who weren’t wearing seatbelts when the bus they were riding in was broadsided. Not pretty, but the video quality was impressive…

The reason I mention YouTube is because it is what it is and video is just a file in a directory. I’m really not worried about my privacy being violated, as long as stuff doesn’t happen, since the camera hard drives roll over about every three days, but still…

It’s an interesting experience to know that your every move during the day, and everything you say, is being recorded. If some fool came across the line and killed me, the way I spent my final hours, and what I said, would be my video legacy. 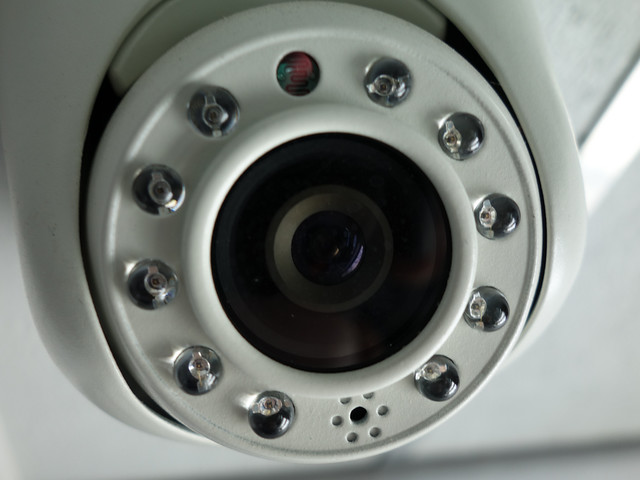 It’s a nice mellow Sunday around the old homestead today. Piper’s found a dry spot to hunt mice and contemplate Spring, Steph’s making things for a baby blanket and I’m cooking up a smoking pot roast out in the garage. 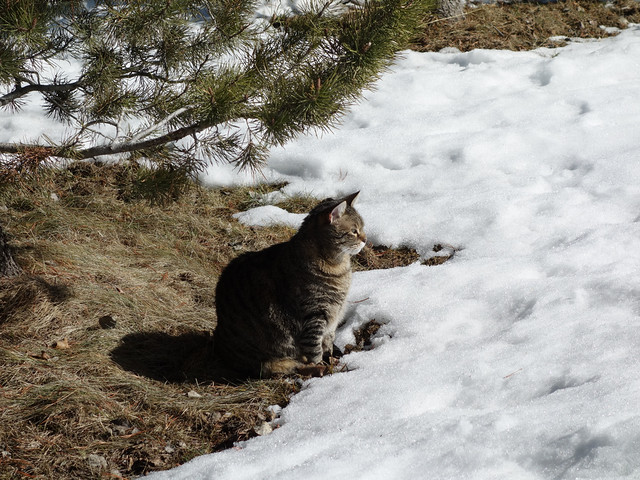 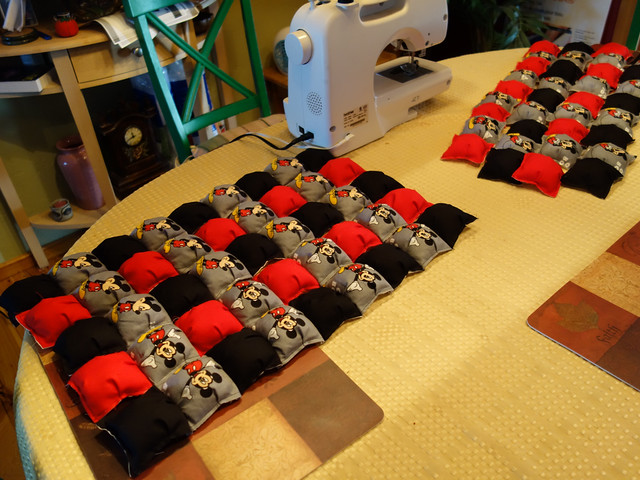 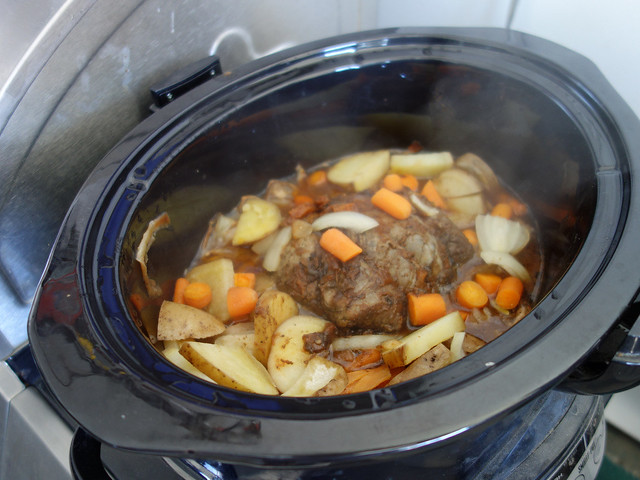 I’m on the verge of releasing my new map app. It’s focused on my neck of the woods and contains over 10,000 addresses across five cities in Teton Valley, Idaho. Those would be Alta (which is actually in Wyoming, but our close neighbor), Driggs, Felt, Tetonia and Victor.

You can toggle individual cities on and off the map and you will be able to isolate addresses by street. Here’s an image of the prototype zoomed all the way out: 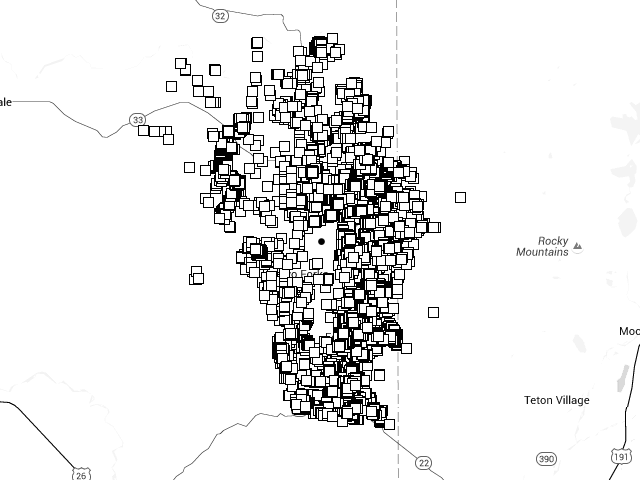 Here’s the app at base mode: 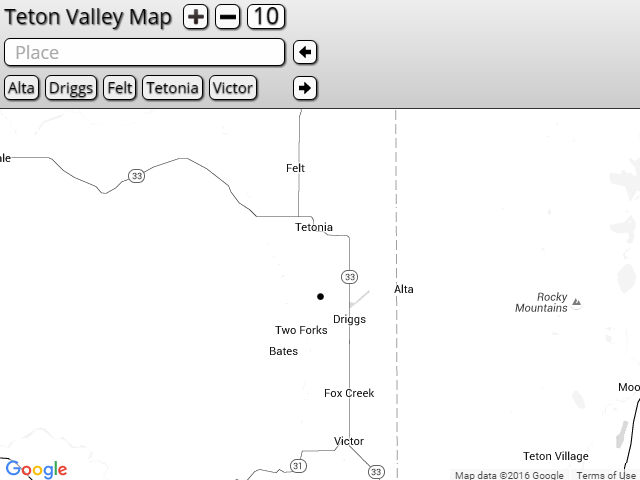 Here’s the view at two zoom clicks out: 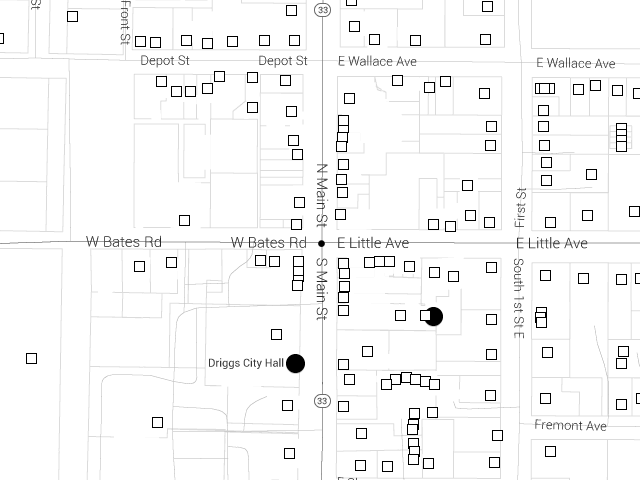 Steph was concerned about this chunk of solid ice protuding from our roof this evening. She was worried that it might fall off and bury Piper on the deck. No chance of that, it was solid ice, and Steph couldn’t knock it down.

Enter, The Man (who lives in a warm cave surrounded by state of the art tech toys, writing esoteric mapping code) to the rescue! I knocked it down with a few mighty swipes of my mouse exercised incredible arms.

Have you ever seen a Magpie or a Raven who one minute was eating roadkill and the next minute he is roadkill because he wasn’t quick enough. I wonder if the young Magpie approaching the scene goes “Hey, that used to be my uncle, Oh well, now he’s my lunch”.

I’ve been thinking lately that I’m nobody’s bitch and nobody is my bitch. Unlike Supergirl, who is her bitch bosses bitch, to the bitchin max. 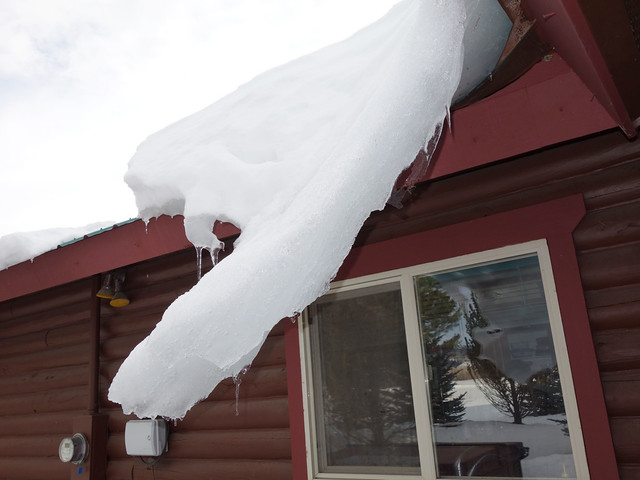 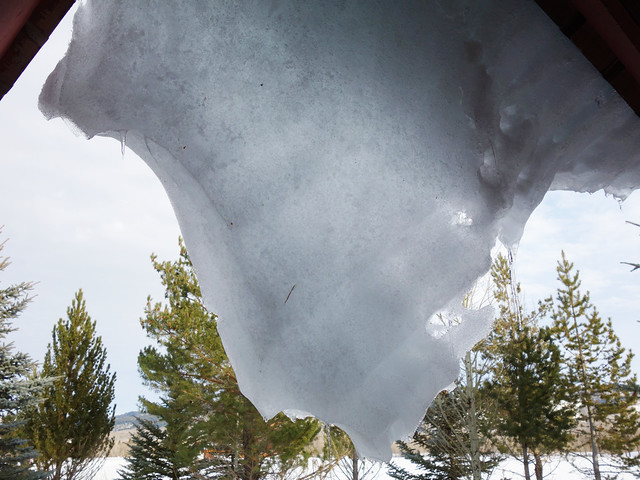 My niece Catherine and my friend Dave are having a baby shortly and this is a very big deal in our family. My sister has three kids and this is the first grandchild. Catherine likes elephants so Steph put together this baby basket for the baby shower this weekend.

She’s very good at these things, and I’ve seen a bunch of them over the years… 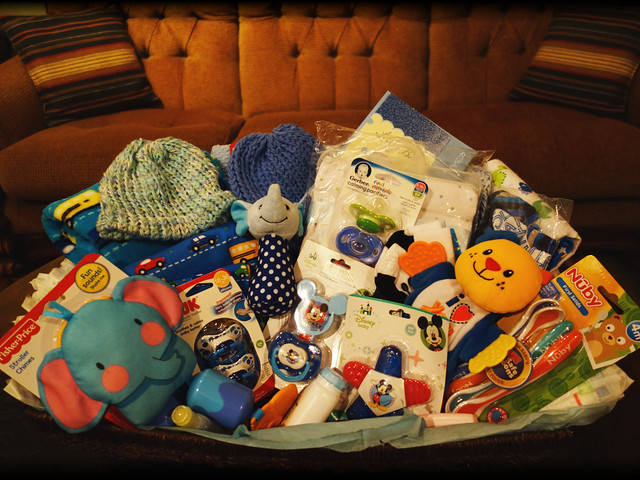 My poor brain is swirling around in a sea of Google eccentricities. The new map program is focused on the area I live in, Teton Valley Idaho, and I recently came across an amazing dataset of 10,000 lat/lng sets that represent every address in our valley.

I have no idea how the data reached the internet, especially since surrounding areas have none, but I suspect it had to do with an earlier address conversion that occurred here. In any event, I have it.

The data initial consists of city: (Driggs, Victor, Tetonia, Felt and Alta) and the Longitude and Latitude for each address. This was enough for me to go banging the lat/lng’s up against the Google reverse goecoder, to obtain additional information like street address and bounds.

Very quickly I ran up against Googles rate limits. They don’t mind if you write an app that sends a location to their API and get an address back within a web app, but when you start sending thousands of them at a time, they have a problem. Actually, they like apps that maintain their addresses, it saves them overhead, as long as you implement the data on their Google maps. You just have to play their complicated game, to get it.

I’ve created a MySql database on my server that is gathering up all of the geolocation data for the Teton Valley as I write this. I had to go through an amazing number of poorly documented hoops from Google including signing up for their pay as you go plan ($.50 per thousand hits).

I like moose, they’ve got attitude and a temper, and it seems everytime I get a photo of them, they’re walking away and all I see is moose butt. I heard these guys were wondering around in Driggs over my scanner. I also found out cop info that somebody in town is feeding them. Not good… 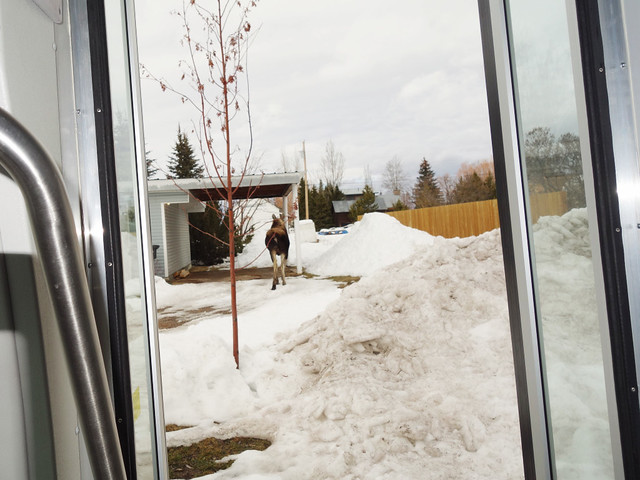 I’m working on an amazing new map project. Stay tuned, and excuse me while I code… 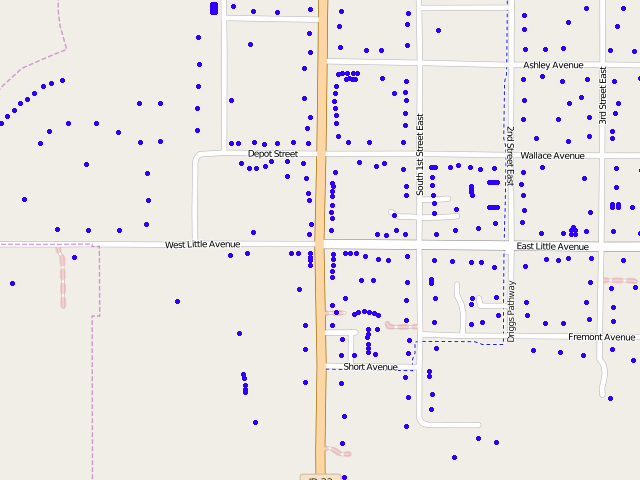 I gave Steph the gift of crawling under the house to replace the well-water filter and I’m cooking up my ribs. Who says that grumpy old bus driver Jim is not romantic? 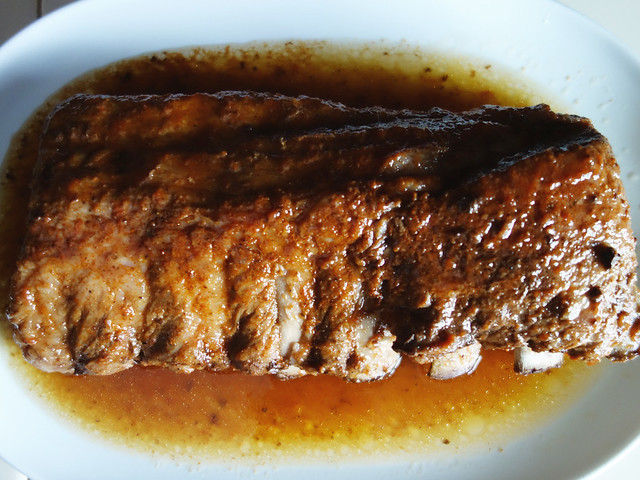 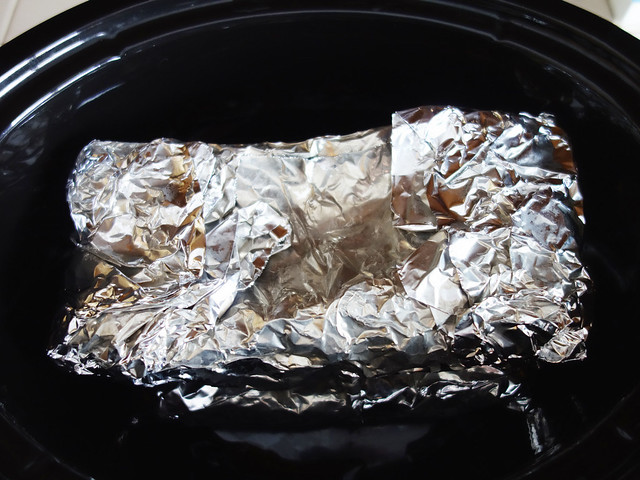