I had a good time down at Lava Hot Springs, only lost a few brain cells, met a drinking buddy named Justin (I think that was his name :-) and it’s a beautiful day to be home.

Click the photo below to see a shot of Jason, and a couple more… 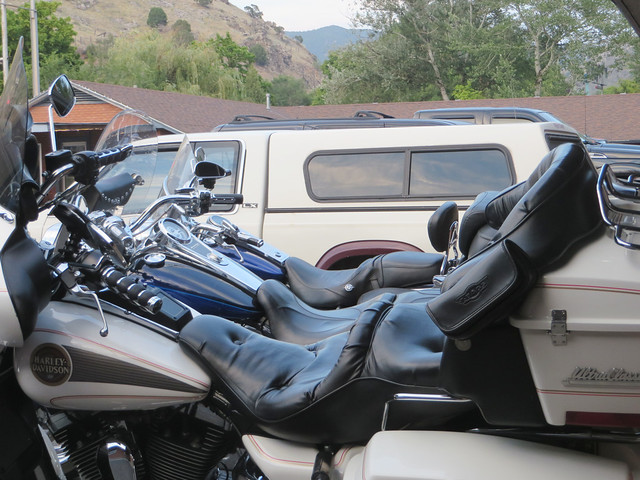 A funny thing happened at the end of the evening that night. My new friends dragged me over to the hot springs for one last soak. We split up and I ended up in the 110° pool. Shortly after, some guy was tapping me on the shoulder from above asking me if I had been drinking. It was an authoritarian request like maybe an off-duty cop working for the place would make. I got up and started walking to the exit steps to confront him and stumbled a bit and the guy said something like “AhHa!” I was ready to leave anyway and I appreciated the prompting and I was almost out the gate when the guy appeared out of the night and cut the plastic entry band off my wrist. Woah, I’d just been 86’d from the hot springs! How cool…

The smell of many fragrances of sunscreen blasted into my face as I sat by the side of the road next to the motel where I was waiting for my room. People with plastic flotation devices were heading towards the river so I followed them and took pictures from the bridge. Click the picture below to see them, posted from my new netbook… 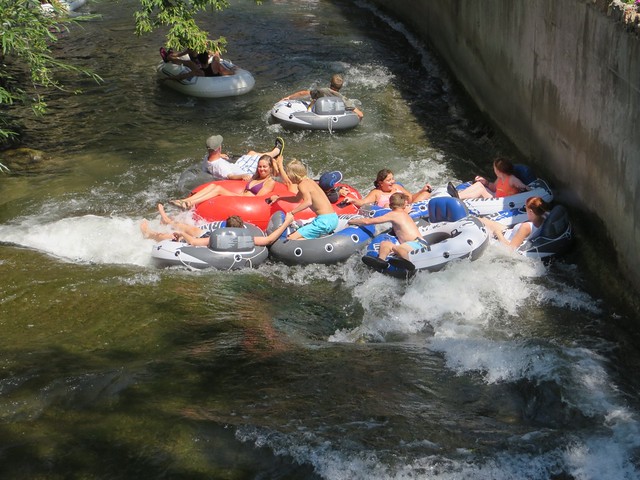 I spotted this cool thing in downtown Billings Friday night. I don’t even know what they call it but leave it to Montana to be original. 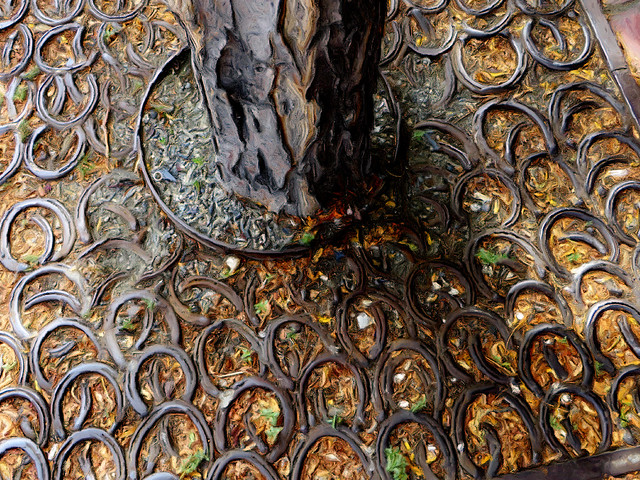 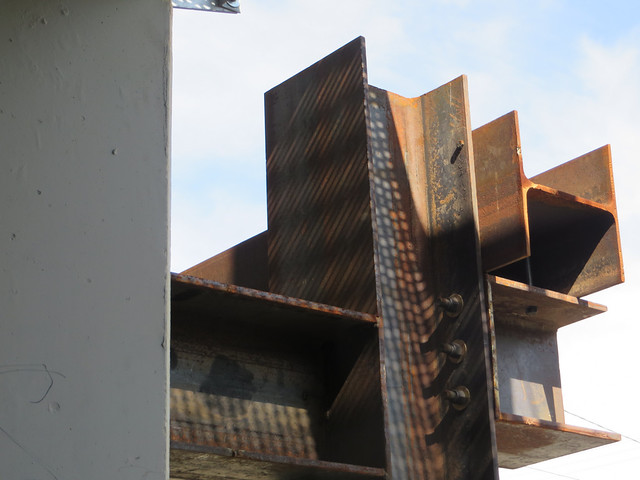 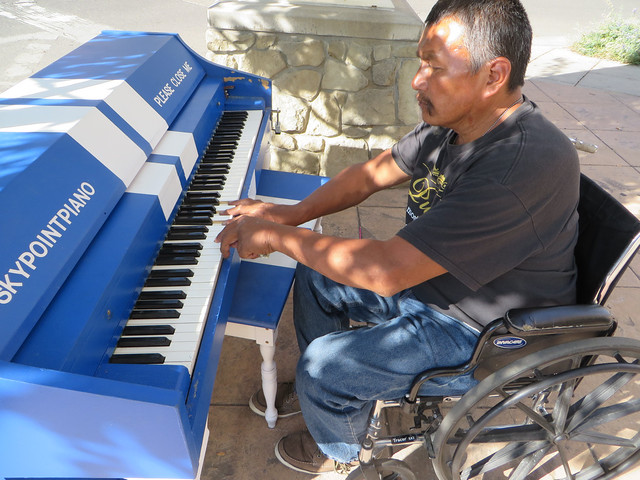 There were multiple lodging options to chose from near the public hot springs in Lava, including a couple of motels just a hundred yards from the entrance. When I spotted the Color TV sign I realized that the extra money I was probably going to pay for color would be well worth it. I am a high tech guy after all, in fact I’m sure the maid wondered what that cylindrical device was (my Echo) sitting amongst my tablets and other electronics on the dingy little motel table when she refreshed the room.

In any event, I went with the color tv option and I have no regrets at all, besides, black and white is just so out of date! 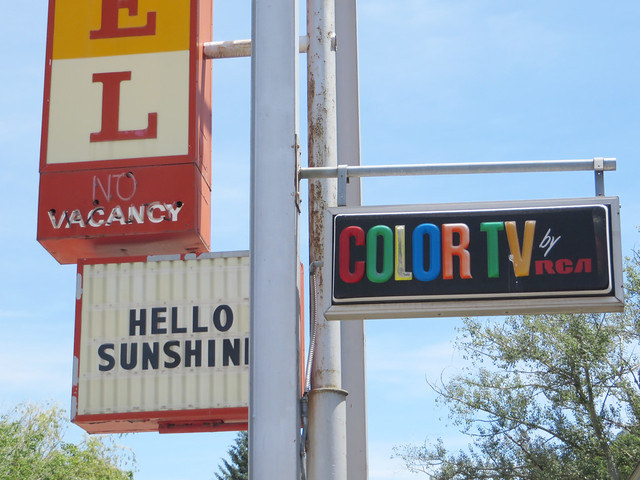 Here’s a few photos I took of Lava yesterday afternoon, and this morning. Click the picture below to get started… 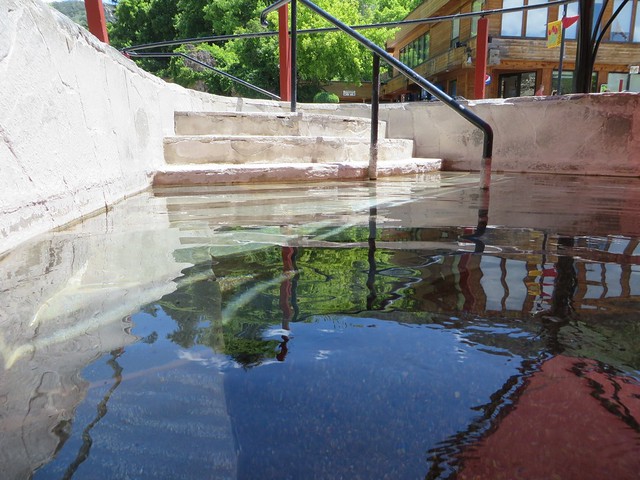 I took off for Lava Hot Springs this morning. Between the lower back pain that’s been hurting for weeks now, and the allergy snot trying to drown me, I figured I better get out of town before they bring me down. A while later I spun off Hwy 89 onto 239 at Freedom, WY and headed west to Lava.

Freedom is the oldest settlement in Star Valley. It started out as a Mormon polygamist border town that allowed them to escape the Idaho cops, by stepping over the line back into Wyoming, thus the name Freedom. One of the most famous guns and ammo store is also based there, Freedom Arms!

The drive to Lava was quite nice, great scenery and not much traffic. I’m here now, heading to the hot springs for some much needed healing… 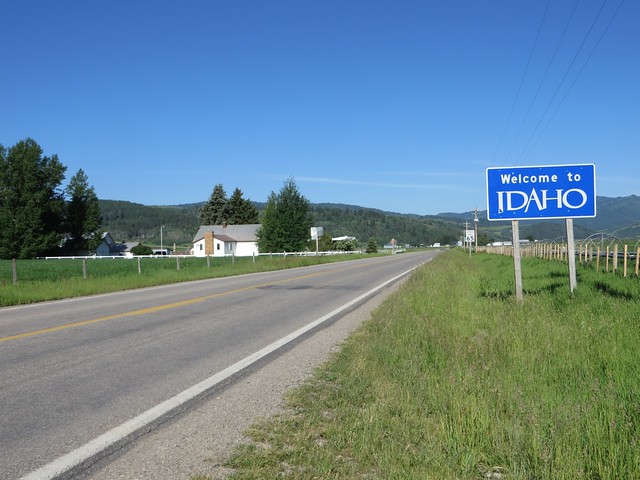 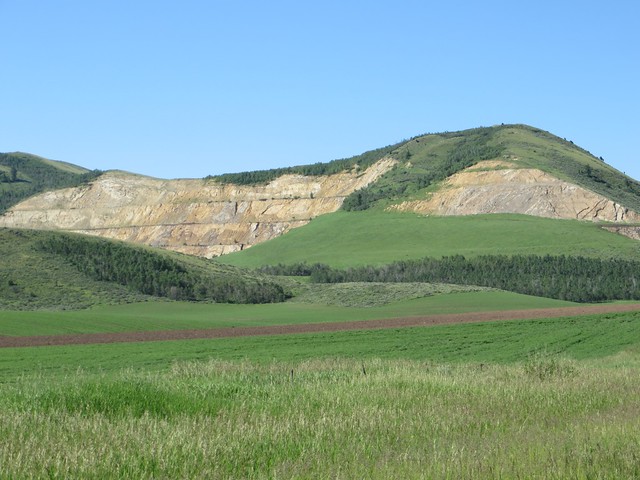 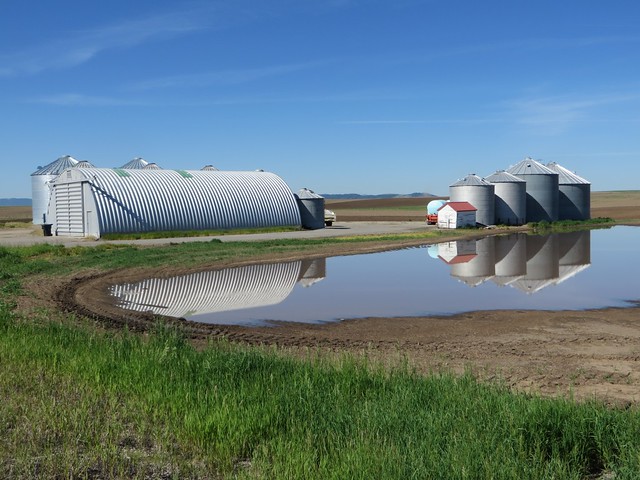 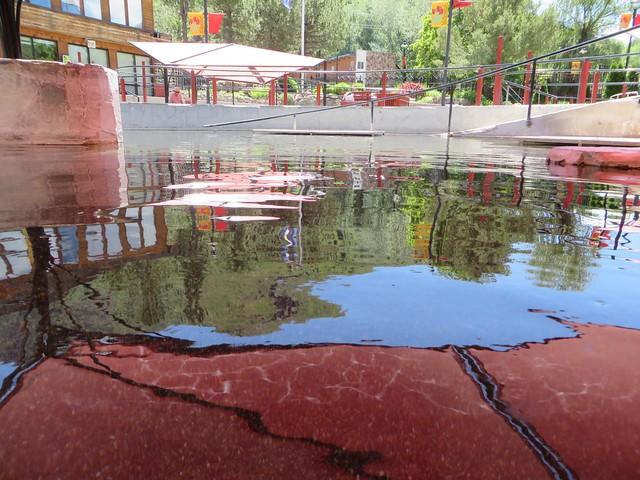 My Tilley Hat has a secret spot. The bottom of the inside label is connected to the hat by velcro and makes a perfect spot to hold stuff. When I was at Norris Hot Springs last Saturday I would secure my truck and then stash the keys in my hat along with a twenty dollar bill. I then arrived at the hot pool with just bathing shorts on, a towel and my hat.

No worries about wet money, or keys on the bottom of the pool… 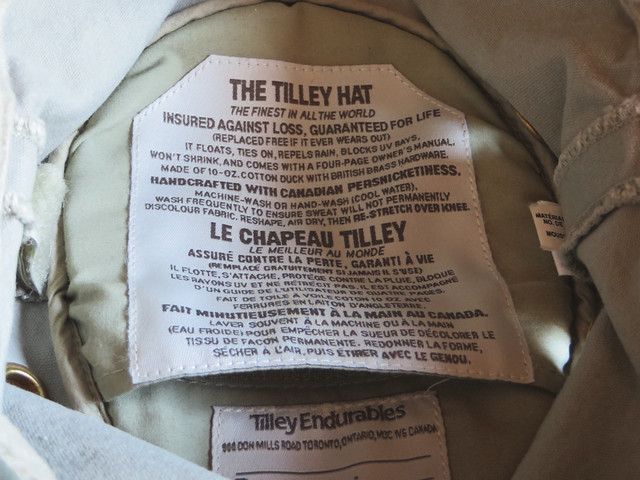 I used my new route planning program bdjMap to organize my next short little vacation jaunt, down to a place I’ve never been to, Lava Hot Springs, Idaho.

The first thing I did was use a dataset I’d setup on JimsMap a while back to locate a cheap motel. Snagged one at a great rate for a couple of nights downtown, and then moved on to planning my route.

I created a new dataset in bdjMap with Lava Hot Springs as the starting point and then moved backwards towards home putting Thayne, WY as the first stop, followed by Driggs. I then unlocked the list and dragged Driggs as first, Thayne second and Lava third. When I clicked Rebuild the whole route came together, here!

My program automatically computed the route back home to Driggs :-) 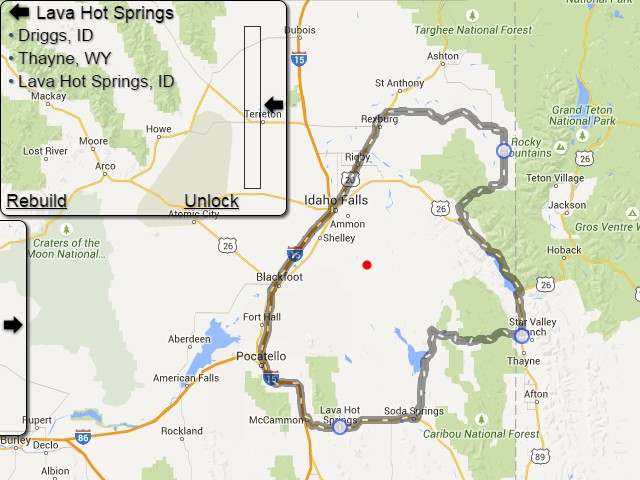 I’ve come up with a new tool for camping out of the back of my truck. I borrowed the big umbrella off of the deck table and I’m securing it on both sides to the truck with bungie cords. I need to figure out a way to secure the bottom because when I tested it out at Norris Hot Springs yesterday the wind blew it around a bit.

Oh yea, I drove 160 miles to Norris yesterday just to test it out, and soak. I got three good sessions in before the crowd hit to listen to the live music, at which point I sat it out and chatted with the cook lady. Even though the water continually runs through the pool, that’s too many body fluids for me. My soaks only had a couple of people…

I’ve got over thirty shots of the trip there and back that I know you’re dying to see, so click the photo below and have at it :-) 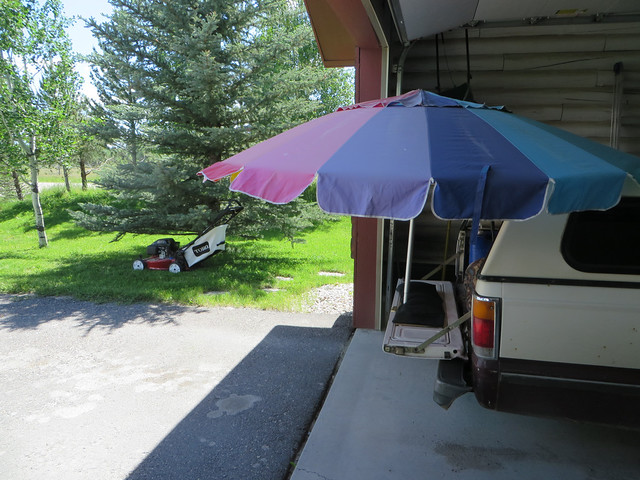 I havn’t started my Arizona big loop yet, I’m just warming up. I had some over-priced chicken fried steak to go, at the Bar and Grill next door to the rundown motel I stayed at last night, and I could only eat half of it. When you click the picture below to see the one-handed driving shots I took coming into Pinedale this morning, it’s the last one :-)

I had an experience yesterday morning in my bed. As I rolled over half asleep to look at the clock (it read 03:30) there was an object hovering a few inches above the bed, between me and the clock, about a foot and a half away. It was dark grey, translucent, and was shaped like a road flare standing on end. Same size too. I reached out to touch it and my hand went right through, then it faded away. It looked just like the mysterious pole in photo four of the photoset. 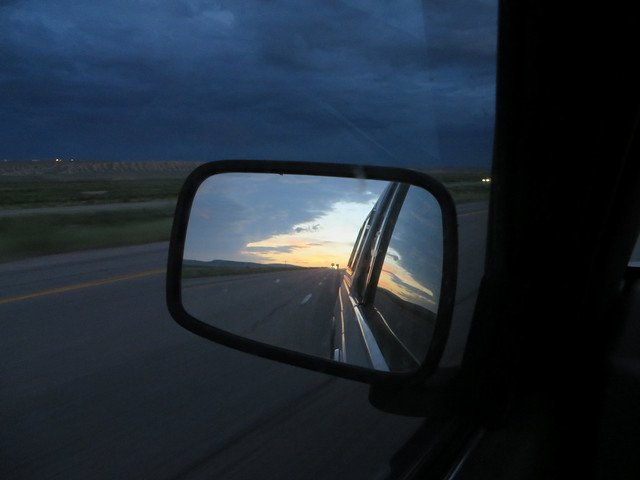 I drove down to Evanston, WY this morning and rolled into town at 1145. I break my trips up into legs of two hundred or so miles and this was one leg from home. (I do this as a fueling reference since my gas gauge is busted.) It was way too early in the day to stop moving so I kicked the second leg into gear and landed in Rawlins, WY.

It’s an old historic place and I wanted to stay near downtown, but their ain’t no motels so I’m hunkered down in a place off the highway. Nothing to see here but I did take some one handed shots from the truck as I drove. The photos started as I left Teton Valley and ended just north of Rawlins. Click the picture below, to see them. 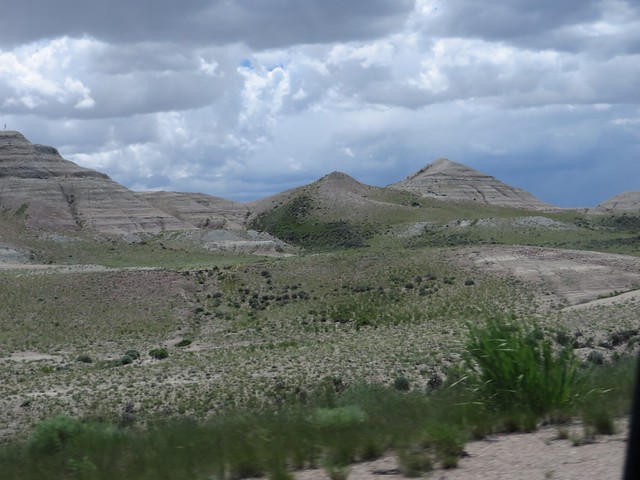 It’s nice to have my mapping code back, I develop this stuff for my own use anyway… 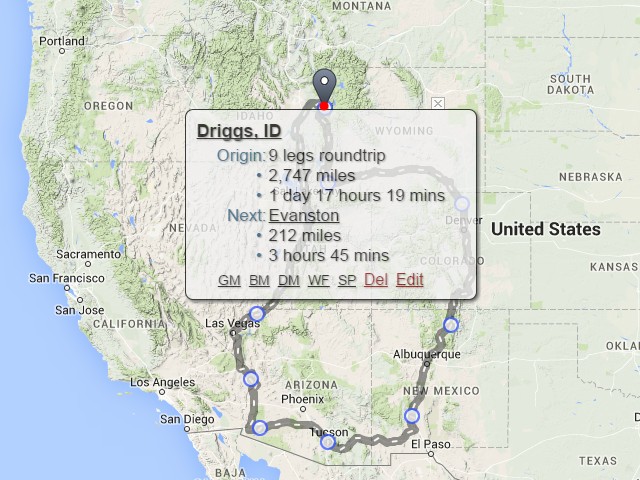 Ain’t she fine! My little 1988 Mazda B2200 extended cab sweety is purring like a kitten and chomping at the bit to add some miles to her 143K odometer reading. She’s a road tripping beauty that sips gas like a professional wine taster. Her new street tires barely have the nubbins worn down, the large Interstate battery is powering my electronics and the bed in the back is waiting for me. Summer vacation is right around the corner :-) 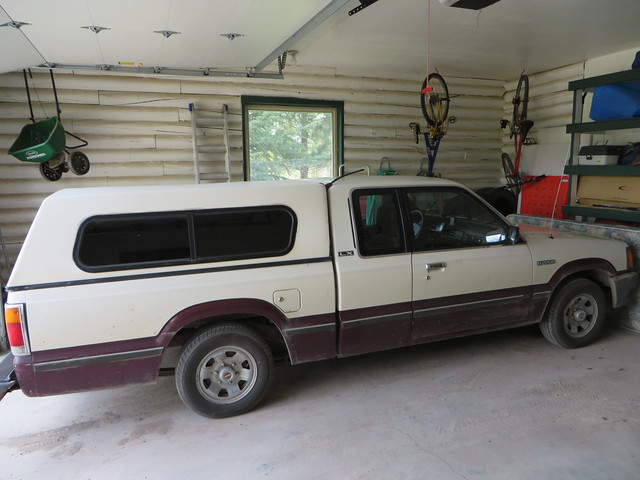 I’ve been hunkering down in my office this evening, planning out my first summer trip. It’s fun being a computer programmer with the summer off because you can create tools that allow you to analyze and structure an adventure, and then live it:

For this first trip (as soon as school is out around here) I’m going to return to familiar territory with a first stop at the great $27 room in Mesquite, NV, followed by a day in Lake Havasu, AZ. Then I’m off to the unknown hot-springs of Truth or Consequences, NM, up to the eclectic Taus, NM, a layover in Fort Collins, CO where my niece lost her life, on to good old Evanston, WY and then home.

I whipped up a JimsMap tonight that presents the active hot springs in the western states. I’m looking forward to hitting a few of them this summer.

I could go into the technical details involved in gathering this data, but I won’t bother, since nobody gets my brain :-) But, if you check it out, that’s cool. Click the picture… 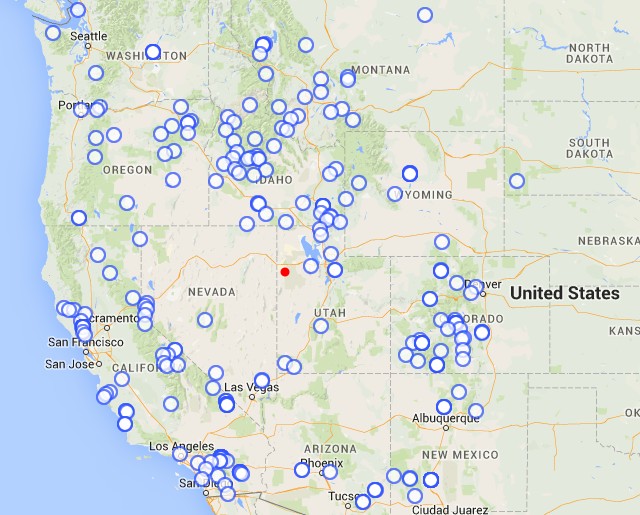