I suppose that the majority of public transit operators start their day on a paved surface of some sort, and their view is probably not very pretty. My day often starts by cruising down the Johnson Ave back road which connects our base to the highway.

During the winter the ruts and potholes are filled in with packed snow and the views out my windows are very nice. Here’s a drivers side shot I took this morning… 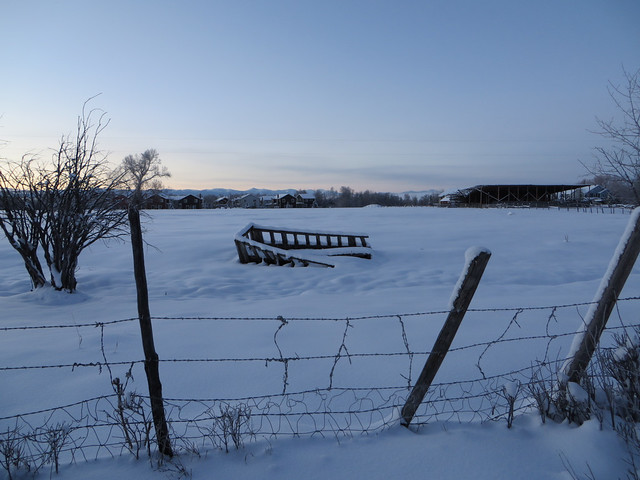 A nice little cold front has settled down on our valley. It was -21 at our house this morning and I’m sure much colder up on the mountain. Cold does magical things when it meets a perfect cloudless sky!

These photos were taken in Alta today, right off Hastings Lane. 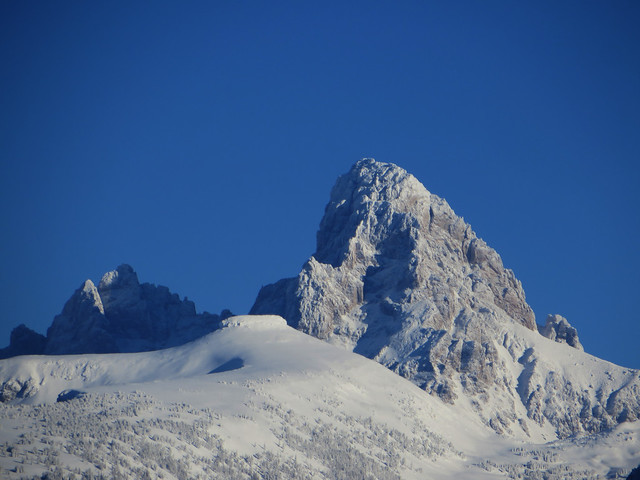 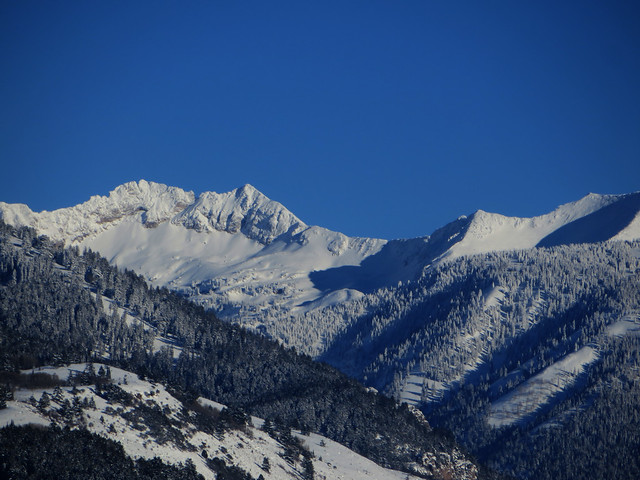 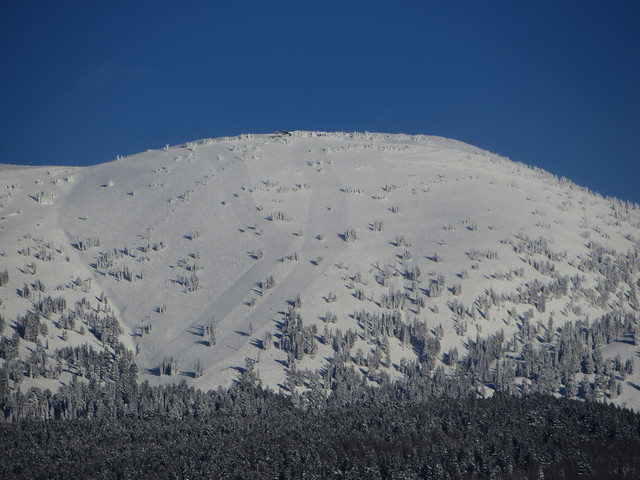 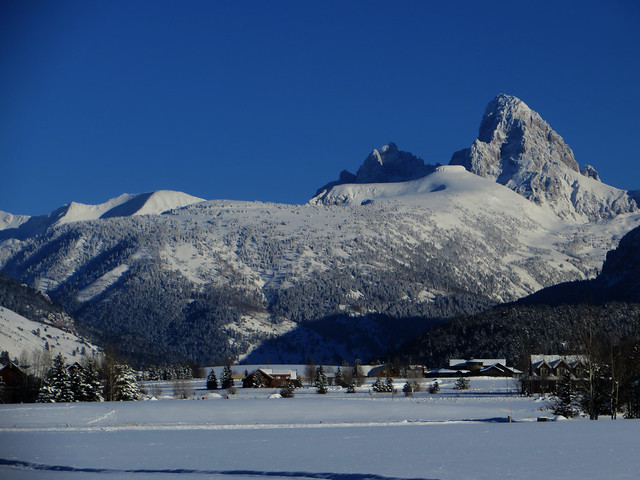 I knew the trip to christmas dinner had the potential of getting my little travel truck stuck so I threw in some goodies before I left. I already had the big old dead TV strapped down for weight, along with my big tools, but I wanted to be better prepared so I threw in my hand crank pulley thing, two shovels and the big floor jack.

I’ve also got a brand new tow strap I recently picked up, which is totally useless because it has no hooks on either end. I think I’ll run to Ace today… Oh, I’ve also got a huge jug of water back there, all of which has the benefit of adding weight over the rear differential of my little rear-drive truck. So far so good this winter, my Hankook snow tires are amazing, I can brake on a buck, and I haven’t been stuck once.

Quite frankly though, I can’t wait to pull all of that nonsense out of there, make up my bed, and hit the road this summer! 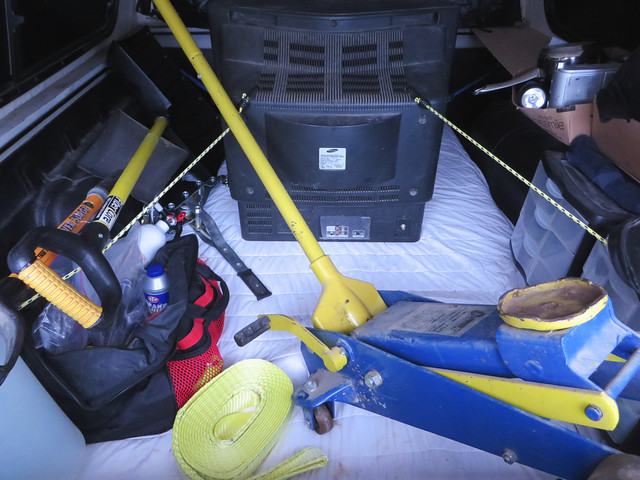 Update: I just picked up some heavy duty hooks to go with that tow strap: 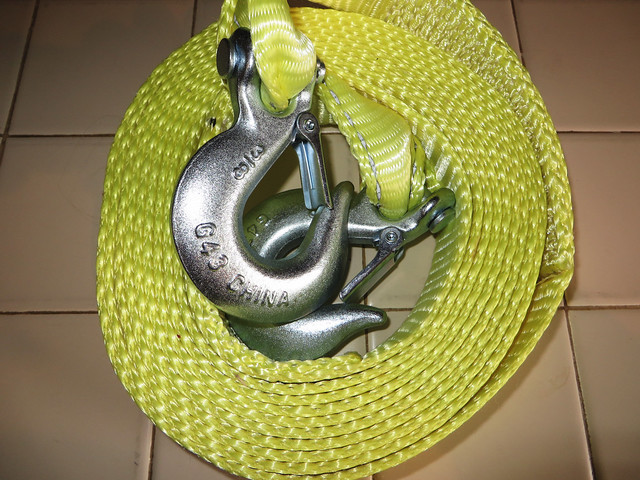 I was out on my sisters back porch yesterday watching her neighbor Steve plow his road. He’s got some renters up there so he needs to keep it accessible. Over the years I’ve observed several slick tools emerge from his big garage but having a snow blower like this puts him way up there on my cool list!

He also has horses and he packs a sidearm when he rides his four-wheeler up into the foothills, to ward off bears. No spray for Steve ;-)

Steph and I drove to my sisters home in Alta, Wyoming today for Christmas dinner with the family, and we had a great time!

It’s kind of an interesting line I draw as the family blogger. They all endure me taking pictures throughout the evening knowing that their mugs are going to end up on my blog, and not knowing how they will come off. Well, I have a very handsome family and the photos turned out great!

Click the group photo below to view the photoset: 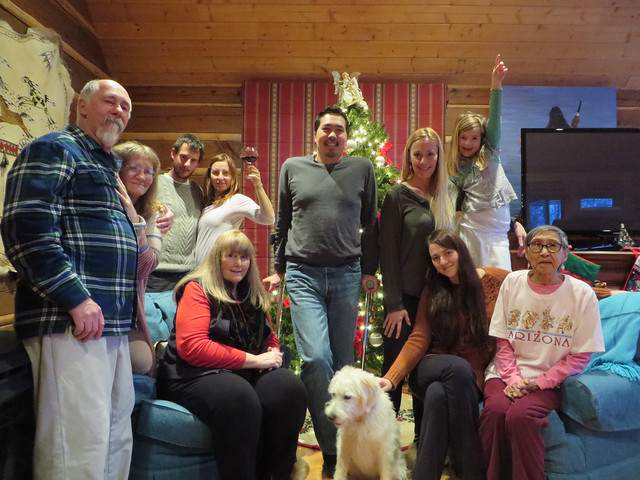 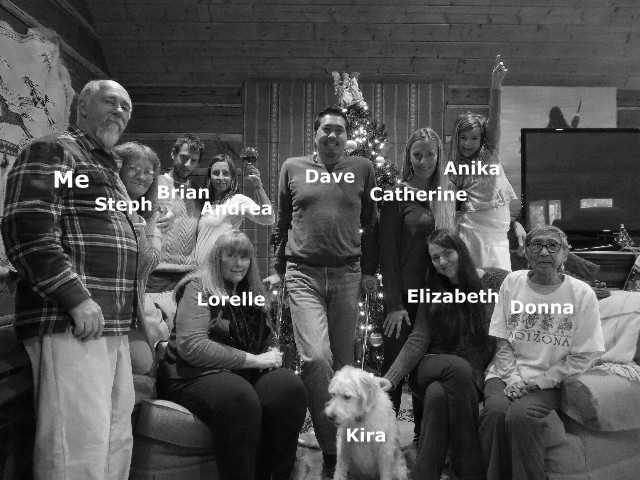 It’s definitely a white christmas around our house this morning. We’re heading over to my sisters house at noon bearing pashed motatoes as our dinner contribution and I’ll take a bunch of photos and post them here. 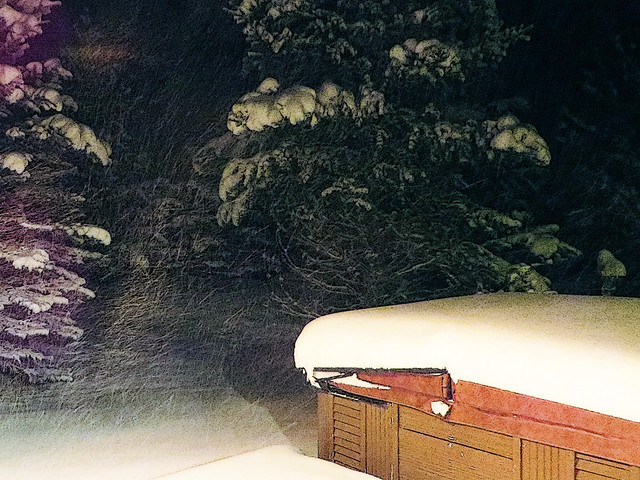 Twas the night before christmas and Steph and I just finished watching The Interview, streaming from Google Play. My computer has not fried and my emails aren’t floating around social media, thank you.

The movie in general was horribly produced, with storylines that were totally unbelievable. There was tons of swearing, and sexual innuendos would have been welcome, instead it was just out there in an ugly fashion.

As I’m watching this thing it’s dawning on me that we’ve just been played. There were many references in the film to honey potting which is a technique within the cyber world to set a bait and trap hackers. In this case, The Interview is the honeypot!

Sony wasn’t hacked, they hacked us. Do you realize how many people are going to watch this piece of crap, because of the publicity? Would I have paid $5.99 tonight to watch this on christmas eve if it didn’t have this insane notoriety surrounding it? No!

Man, I’m so tired of being manipulated by politicians and the media. They can just shove a large metal tube containing a poison strip up their backside and sit on it. Merry christmas!

I rented The Interview from Google Play today for $5.99 and we’ll watch it tonight. It’s funny that a movie that would never have made my playlist ends up being our christmas eve watch! Move over sappy christmas crap…

Steph’s coming back from her Suburban christmas party in Jackson, WY. and she’s concerned that the Koreans (or whomever) would hack us for watching this flick. Here’s my IP address: 207.183.183.144. Bring it on! 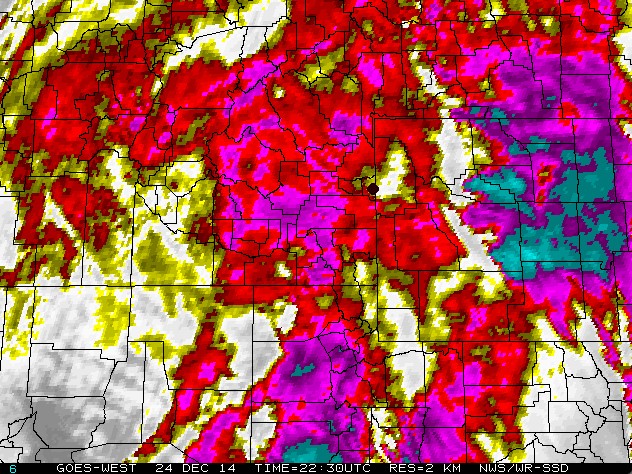 I guess it’s my punishment for not capitalizing christmas on my blog. My spell checker keeps chastising me and with perverse pleasure, I ignore it. So, on that note, let me point my camera out the window of my traveling truck, and give you a christmas treat: 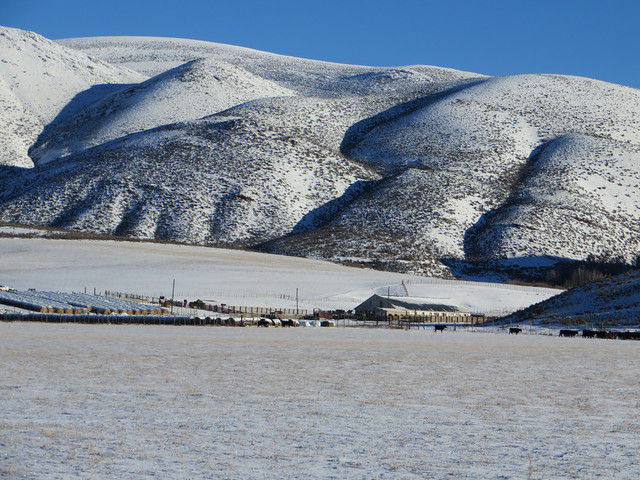 Ah, what the heck, I’m in a giving mood, so here’s another look: 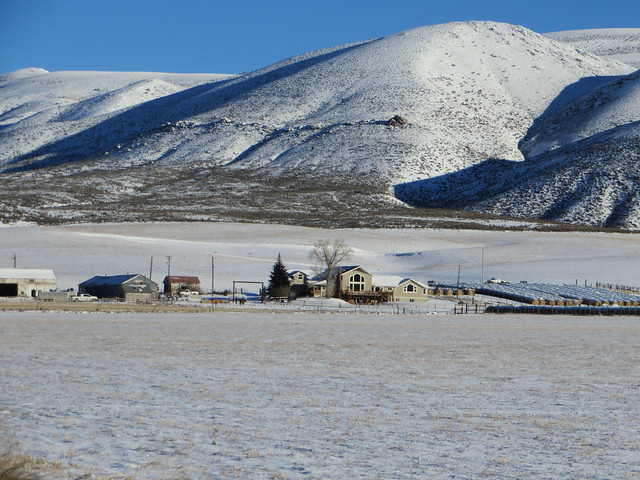 I topped my gas tank off at Basin Travel in Driggs and then drove to Evanston, WY. this morning. It was around 230 miles and when I fueled up it came to $18. At this rate, and this price, I may just keep on driving…

Or maybe not, my presence is expected at my sisters house on Thursday and my employer assumes I will clock in on the following Monday. Oh well, I guess I should just wander off to the hot tub here at the Days Inn and plan my next few hours. 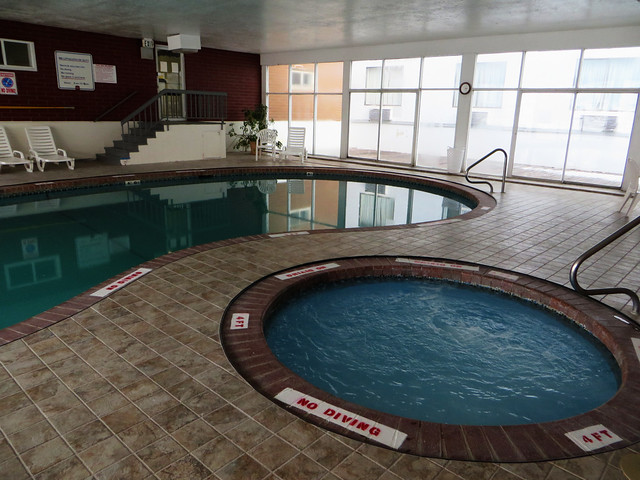 It’s really nice having family living next door. Steph and I dropped by this morning at Brian and Andrea’s new house for a great breakfast and then we scooped up Anika so they could go skiing. I made it clear that Annie’s welcome to hang out here anytime without them having to feed us :-)

The girls are having a great time doing craft stuff and watching Netflix while I’m hunkered down in my office writing code and watching football. I guess all’s well in our neck of the woods. Goodnight… 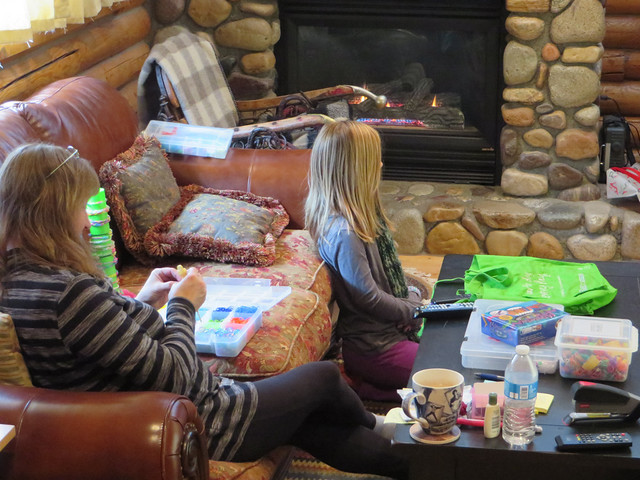 My Christmas shopping is done. I got Steph a couple of additions for her new Chromebook: a nice little Logitech wireless mouse and a 32g card to store her music and photos. Now, on to New Years…

btw: I handed out more than thirty envelopes to my kids last week, so my non-grinch karma is solidly intact :-) 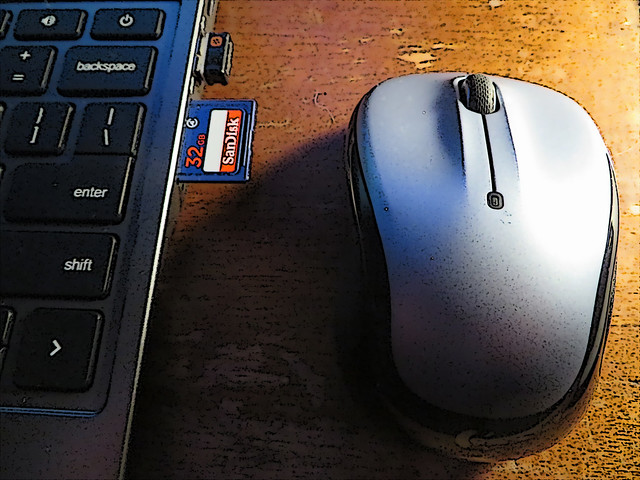 Have you ever wondered what the electrical system of a modern day para-transit bus looks like? Well, I’m sure you haven’t, but I’m going to open the panel now and show you anyway, just so you know. It’s a work of art in it’s own way… 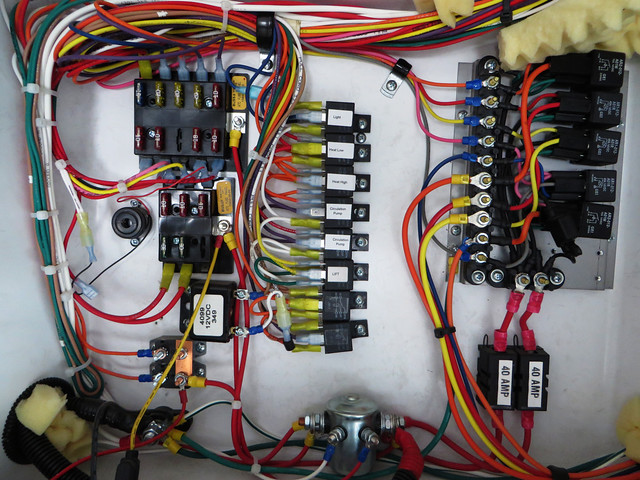 The backside of the Community Center was more crowded than usual as I pulled up at 1300 today to get my seniors, and the normal entryway was blocked by more backsides, so I entered from the east door.

The Teton Middle School 8th grade choir was here singing Christmas carols to the seniors while they had lunch. I took these shots, rustled up my senior ladies, and we made our escape out the back. 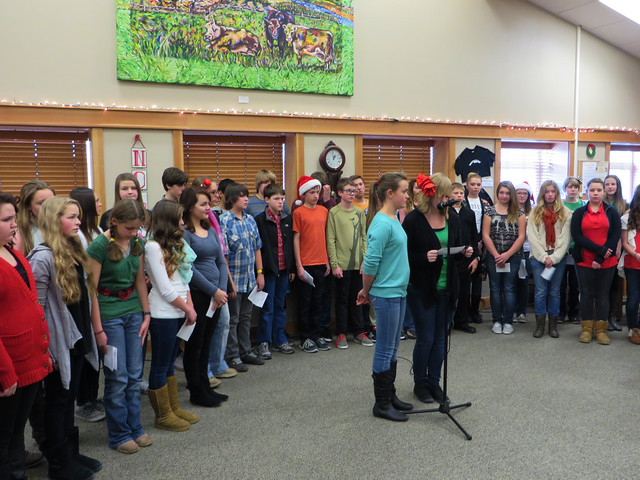 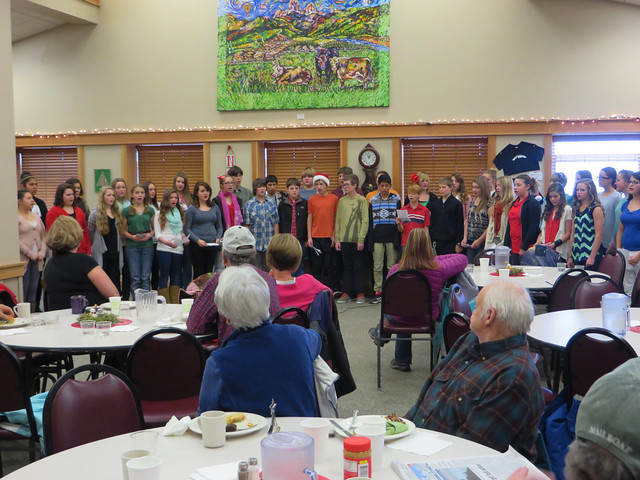 We’ve got a new client that lives down an old covered wagon trail, pretending to be a road. It even has a name (W 4750 N) but I don’t believe it deserves that distinction.

On the way back from dropping her off at a house in the middle of nowhere I spotted this structure with an old car in it. So, dodging traffic, I stopped and took these shots.

I just talked to Riley, who knows all things about all cars, and he told me it’s a somewhat rare 1957 Chevy Belair. The connection between the windows at the back are different and interesting, and it’s in pretty good shape, says the auto body guy! 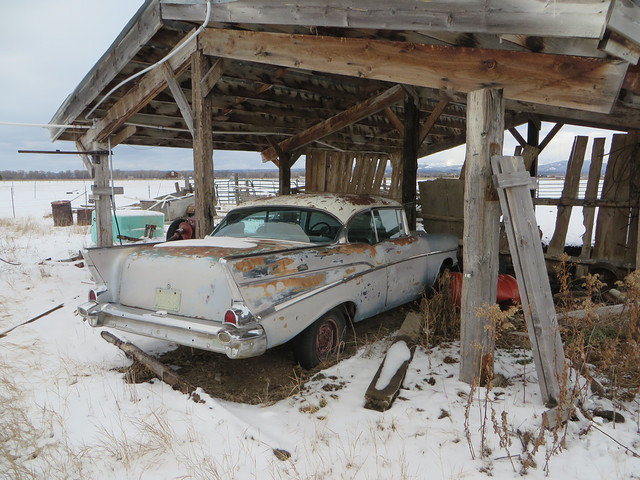 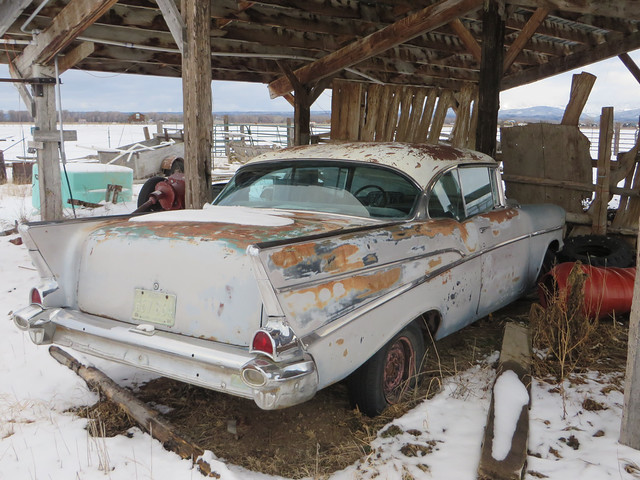 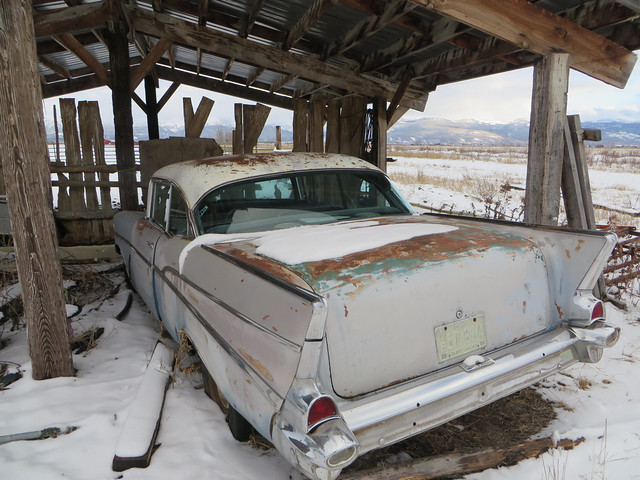