I woke up the other morning with a profound thought. I questioned myself whether to tempt fate and get out the side of the bed that I never do. Nahh… And then I realized that if that’s simply the first thing I think of, then I’m a lucky man, living small.

I’m just a guy living peacefully in a small Idaho town, driving a bus during the week and hunkering down doing my own thing on the weekend. Life is easy, living small.

Think of the people who aren’t, the one’s living large on the world stage. What’s the first thought they have when they wake up. Take for example the Packers tight end Brandon Bostick, who dropped the onside kick he wasn’t supposed to handle in the first place, and cost the Packers an appearance in the Super Bowl. I wonder what his first thought in the morning is? So don’t make the big mistake, and living small is great!

So, what did I do this morning? I drove to Idaho Falls for an all day mandatory First Aid / CPR company drivers meeting. So much for being in control of my own weekend! They served chinese for lunch and I got an interesting fortune cookie:

It’s not often you encounter a mailbox that appears hungry for something to be shoved inside. I’ve passed this creation a few times lately while transporting the woman who lives at the end of an old covered wagon trail in Tetonia.

She asked me to let her off briefly so she could check her mailbox and I slid out of my seat to take this shot while she did. Then she told me whose mailbox it was. It’s a guy I know well, who owns Driggs Tire. It all makes cosmic sense now… 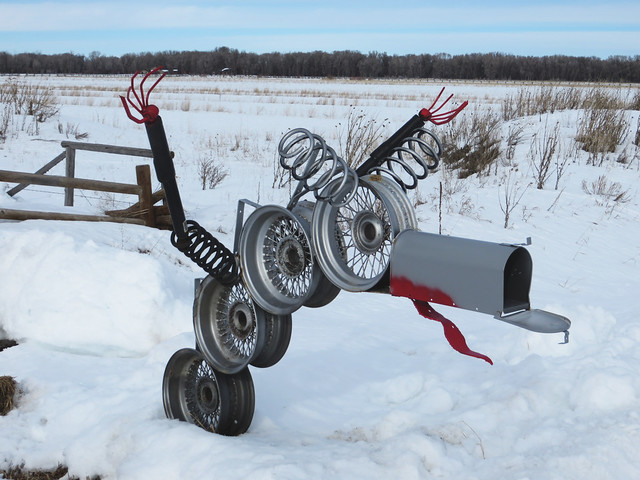 Last summer the guy that plays Deeks on NCIS Los Angeles (Eric Olsen) came into Stephs Suburban office to pay for some propane. To preserve his privacy I implied that perhaps he was just travelling through town, when in reality we knew he had a place in Tetonia and was buying a home in Huntsman Springs.

My friend Skoge sent me this email today and I guess we can drop the pretense:

Jim, You probably know this, but....
I was watching HGTV's "House Hunters" last night and the guy that came into Steph's workplace from NCIS LA (Eric) was featured. He and his wife were looking for a summer/winter vacation place to buy. They showed him a house in Victor, one in Jackson Hole, and one in Driggs. They bought the Driggs home at the Huntsman's development/golf Club. They showed downtown Driggs, too. Pretty cool. You could probably see it if you went to HGTV (Home & Garden Television) web's site. You'd probably recognize all the places they showed. Still hope we'll see you this summer in WARM Petaluma. Stay warm, my friend! Regards to Steph. 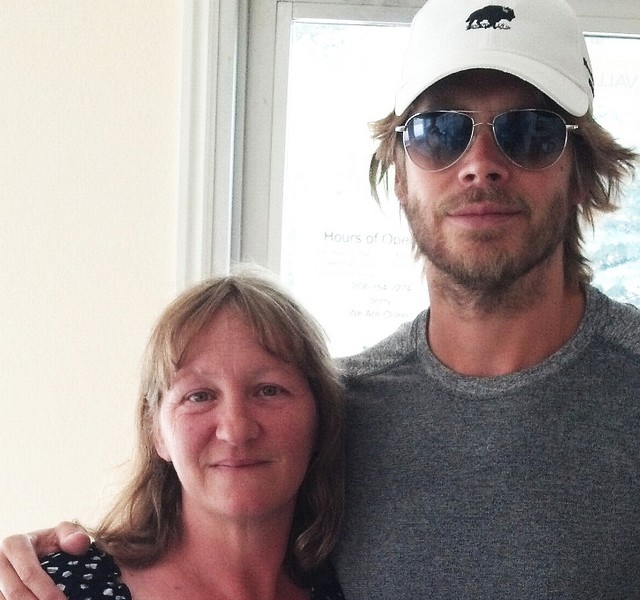 btw: see the buffalo on Eric’s hat? The clue was there all along :-)

I walked into the Victor Gateway Chevron station yesterday, like I have for many years now, after fueling up my bus. The place was a madhouse, new stuff and new people everywhere. They had been bought out by a franchise outfit called Stinky! Or is it Stinker? Either way, what a name! (Ok, here’s their link…)

One of my regular riders daughter was the assistant manager at the formerly locally operated Gateway and it looks like most folks will keep their jobs, that’s very good.

I also noticed a Napa Parts vehicle parked in front of our local infamous auto parts store, Kirkhams, yesterday. Today I spotted two of them and thought, really? I walked in there today to buy a quart of oil and it looked just like the Gateway, new people running around and stuff being stripped off the shelves! They’ve been taken over by Napa…

The reason I call them infamous is because this store has been run by the grouchiest bunch of dudes, ever since I moved here, and I finally quit going in there. I started ordering my auto parts online and driving to Rexburg to pick them up, from Napa!

Ok, so one out of two takeovers ain’t bad. I told the new Stinker’s employees mom today that everytime I walk in there now I’m going to yell out “This place really stinks!” She cringed and asked me not to… Ok. I also learned that they’re dumping the regular vendors that serve the valley and bringing in their own. Hmmm. 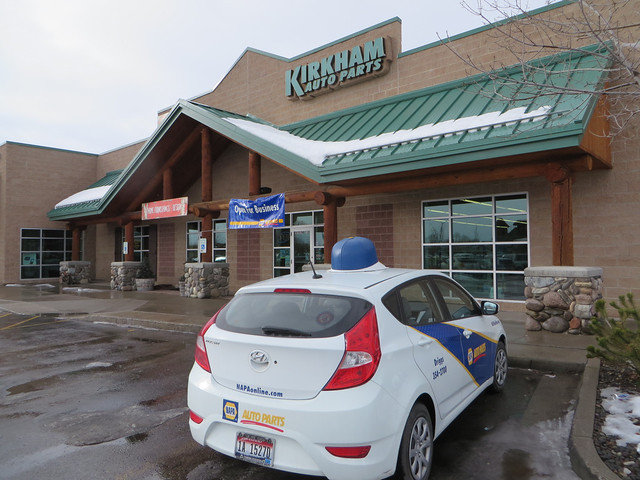 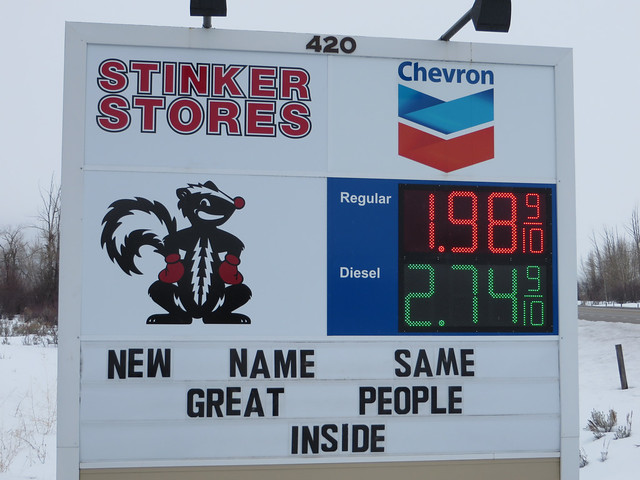 I don’t know if you’ve noticed, but this blog has been all messed up. Last Saturday night my server host, BlueHost, overwrote my main database with one that dated back 144 days ago, to Sept 3, 2014!

I discovered this on Sunday morning and it’s taken until today for BlueHost to restore the files. I’m missing a couple of posts from the end of last week but relieved to be back up and running. Whew! I love these guys but I got hurt bad there for a bit…

And thanks to one of my regular Community School kids for adding just the right photo touch to this post. 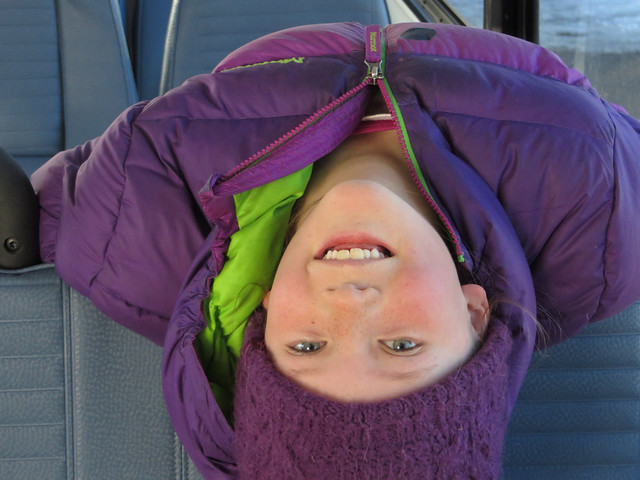 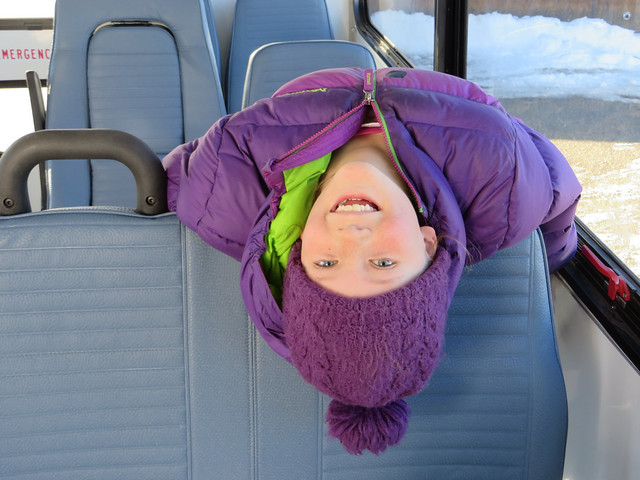 This is what I call the Shelby Pimp Job. It’s an interesting technique of putting out a vague premise of possible things to come, without being specific. Have I mentioned I really hate being cold? The technique is named after my darling granddaughter who has mastered it on social media. 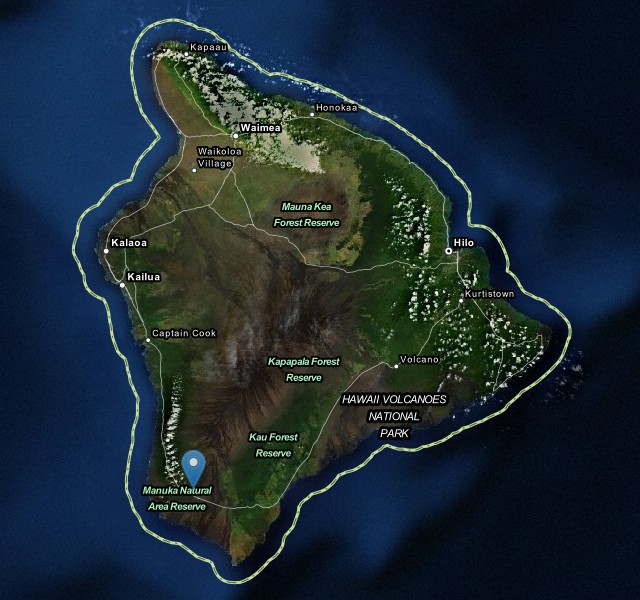 My lost and found box had dwindled down to two items by yesterday. The basket was claimed this morning and dispatch notified me that the mom of the owner of the little girls boots was wondering if they were on my bus. It won’t be long now until I have my empty cardboard box back! 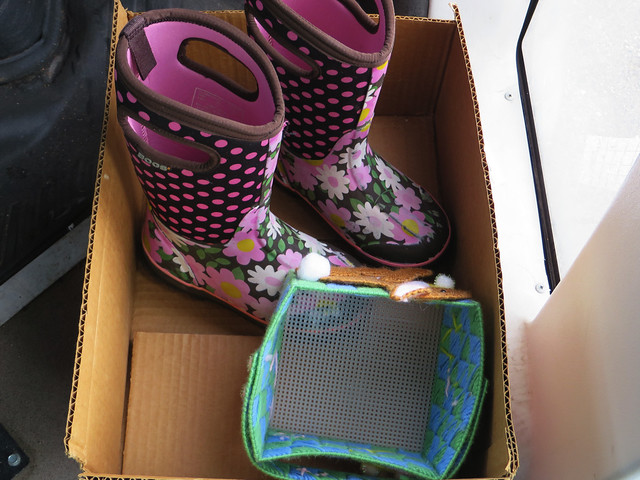 The wraps came off the boxes of snow this morning, and the artists moved in. It should be another great event this year and I’ll keep you posted for sure. 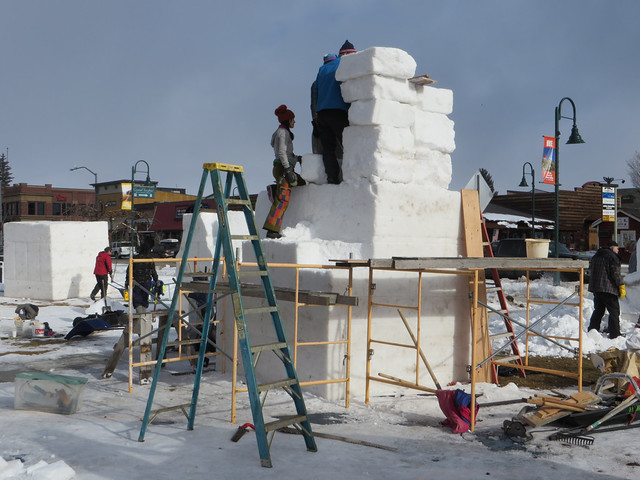 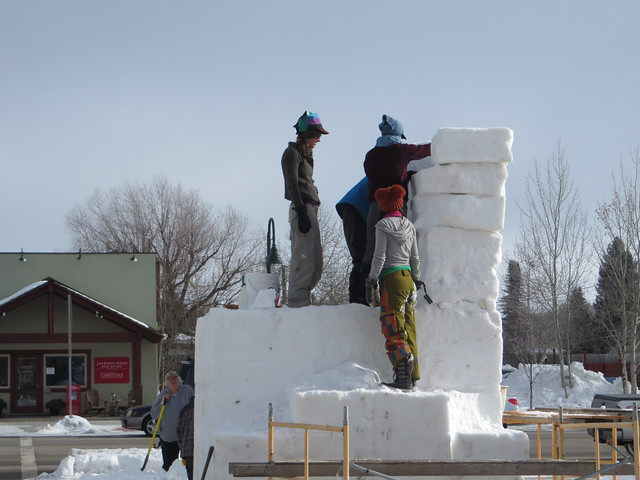 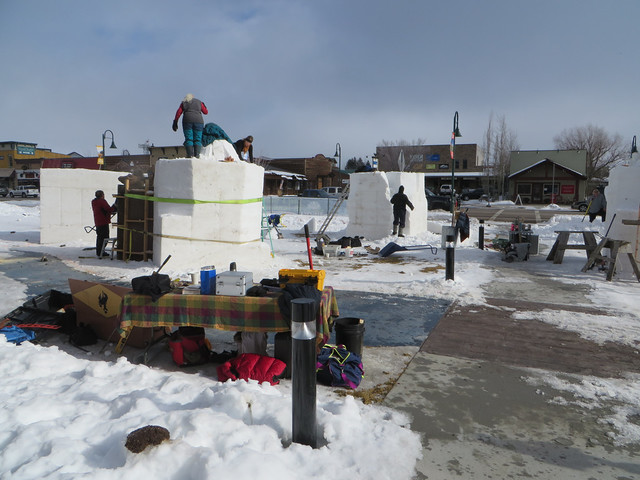 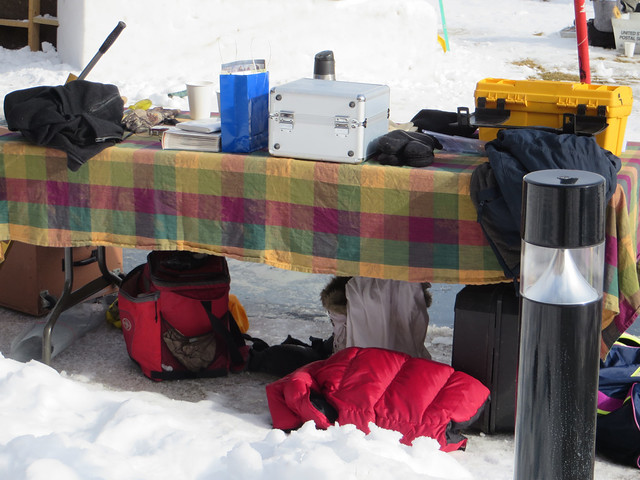 I went for a walk around the Boxes of Snow this morning. They’ve all been packed and stomped by local volunteers last Friday, and despite the moderately warm weather they should be ready to unwrap shortly. I’m sure the tourists driving through town wonder what the hell these things are :-)

Hey, there’s my bus in the background! I park there by Barrels and Bins every morning from 0745 to 0815 M-F waiting for parents to drop their kids off for the trip to the Community School in Victor. That also lets me check out the ice sculptures…

I’ve got a new program under development, focused on my city of residence, Driggs, ID, which involved creating a new Google spreadsheet in the cloud with various fields that will ultimately define every local businesses and point of interest in Driggs.

The purpose of the program is to plot markers on the map for each entity, which you can then click on (or search for), to provide information about that place.

Instead of dragging the map around, taking note of position, and then manually creating a record in the spreadsheet for each new location, I can just right click on a spot on the map, fill in the data, and the new location is added to the spreadsheet in the cloud automatically. It’s not finished yet, but well underway! 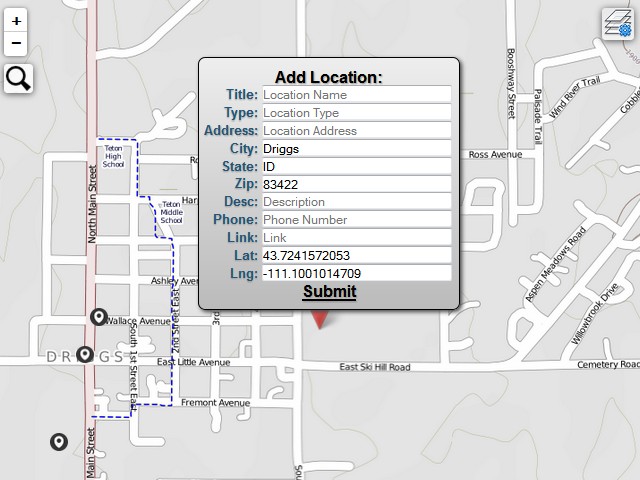 They were putting up the sculpture boxes last week and the volunteer snow stompers did their thing yesterday afternoon. It should be a great Event this year with a lot of things consolidated here in Driggs.

If your going to live in a small town it’s best to live in one with a world class Ski Resort up the road, the first Geotourism Center in the country, a 5-star Resort popping up north of town, and a slew of events like this throughout the year! 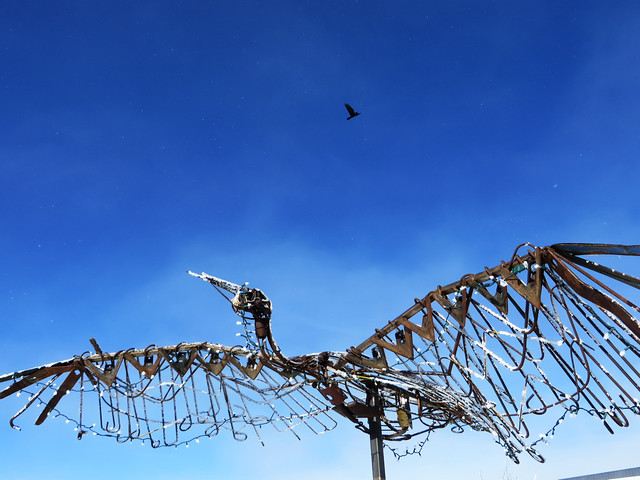 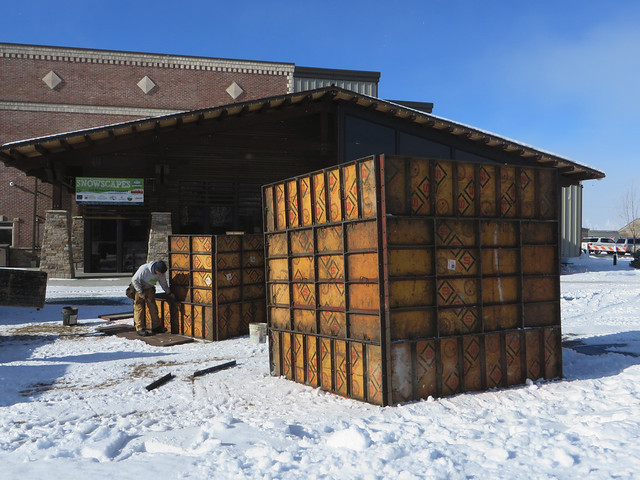 I pulled into All American Tire this afternoon to work out some details on getting our dead backup bus down here, and I had to wait for Hal who was busy helping the Coke truck get unstuck.

The issue was the rear tractor wheels, although I really couldn’t see why he was unable to get out of their driveway. What’s a big old Coke truck doing in there anyway? 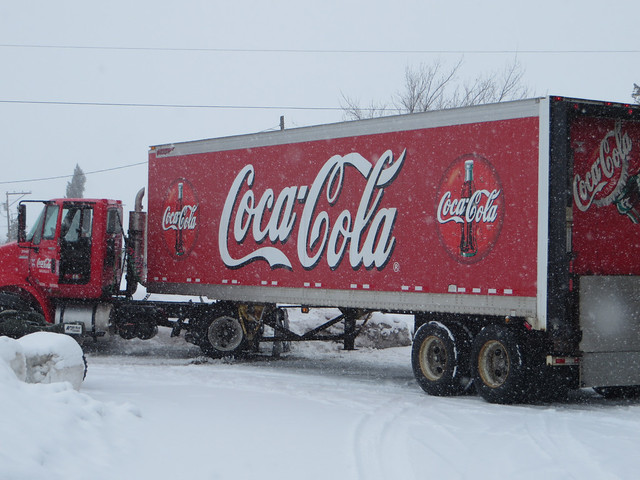 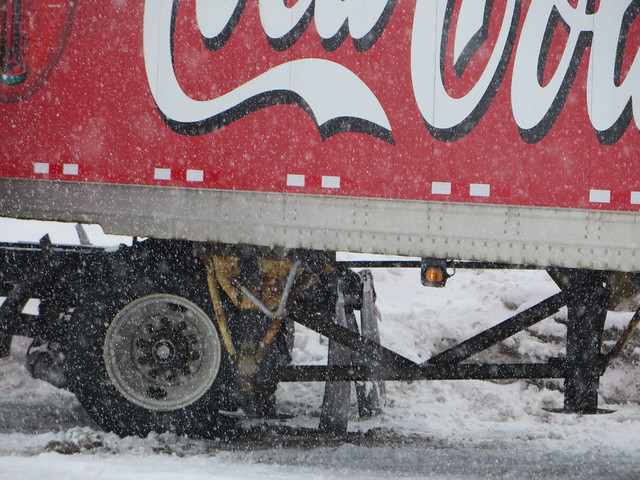 The Victor Gateway Chevron had the distinction early this week of being the first station in the valley to drop below two dollars. The rest of our local gas vending crowd has since fallen into step, and all I can say about it is Shirley, did you ever think? 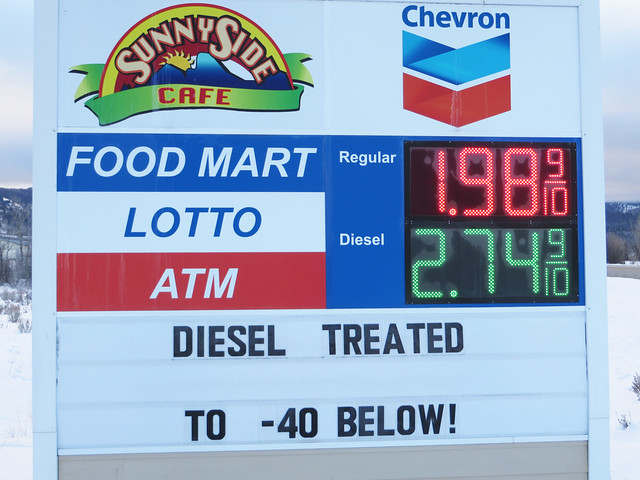 We’re sitting down there in the low end: 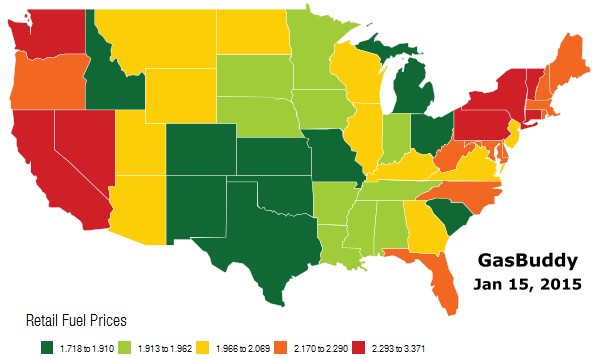 There was a steady progression of small dump trucks looping through the Driggs Mormon Church parking lot yesterday getting loaded up with snow from the formidable snowbank that used to exist there along 2nd Avenue.

I think they’re gathering up resources for the upcoming Snowfest 2015 event and storing it at that large area south of Broulims. This will be my fourth year covering this event here on my blog and I hope you stay tuned, and enjoy my coverage!

Here’s a few photos to accompany the video.