A BDJ original. Prints are available in a limited edition… 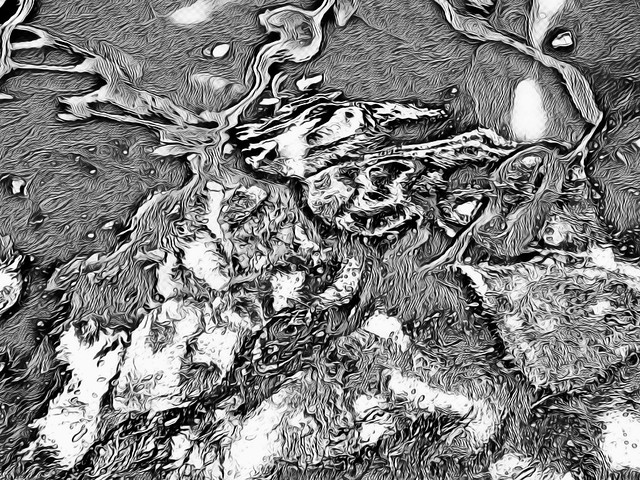 I brought up my NeXht app this morning to find my fruit eating spot and found Davis Dam right around the corner from Laughlin. I jotted down the coordinates, fed them to the GPS and was there in a flash. It’s a sweet little dam, notable in that it was built with local bonds as a means of powering Laughlin and the Mohave Valley, and they had the thing paid off by 2000 from the electricity revenue. Power must be cheap there!

Click the photo below (the one with the great gig line) to see some shots: 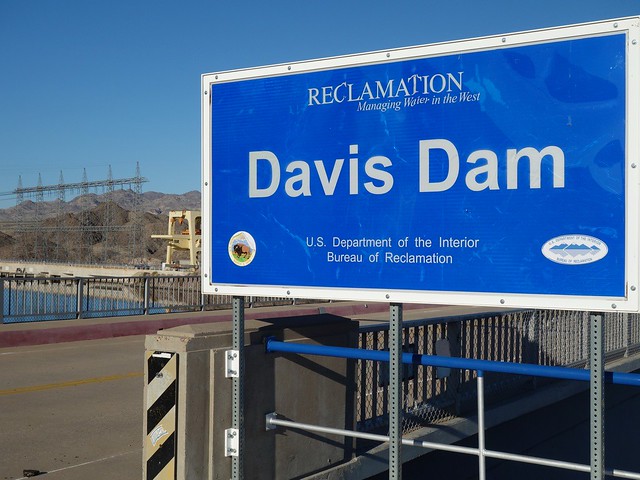 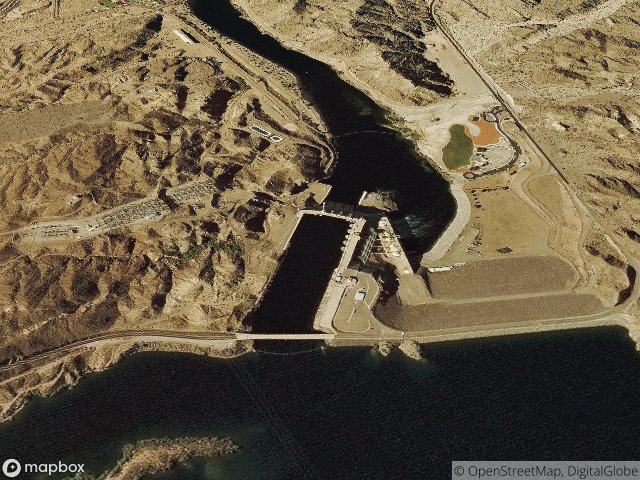 I went wandering around Laughlin this evening and took a bunch of random shots. If you would like to see them, click the photo below. btw: I have no idea what those things are hanging out of the name and yes, that’s the moon. 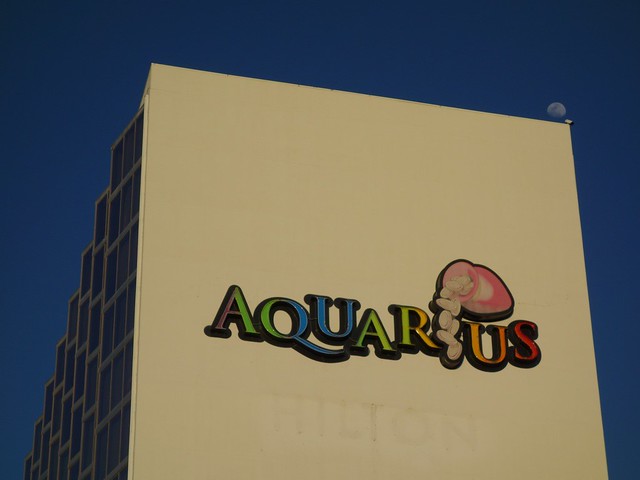 Update: Upon a closer look, they’re chips. Still not sure what the top thing is… 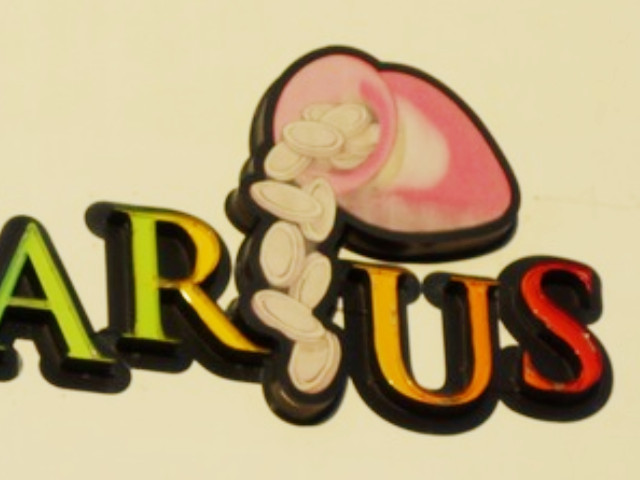 I had to kill a little time yesterday before checking in to my room so I ate my fruit down on the Colorado River and scanned the area from the buttes.

Landed in a great little room and had some spicy New Orleans shrimp at Bubba Gumps. The internet was down so I couldn’t post this until today, but I’m back. 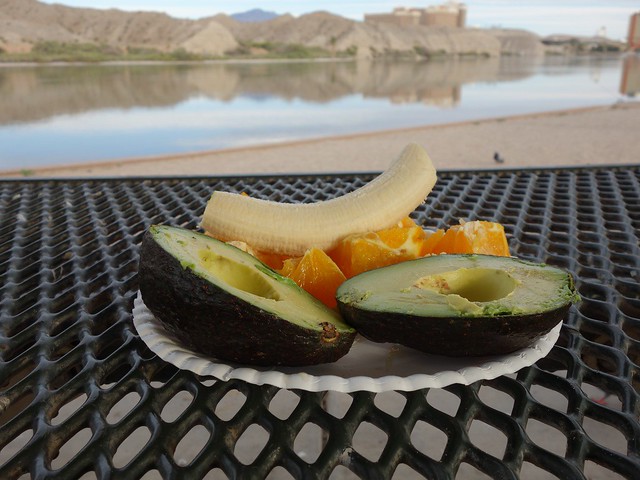 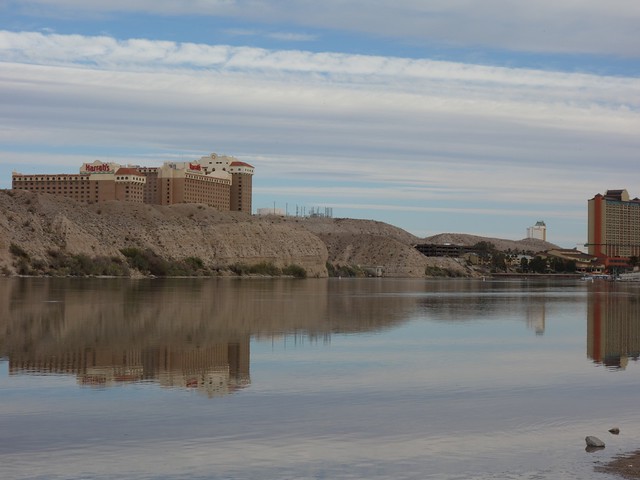 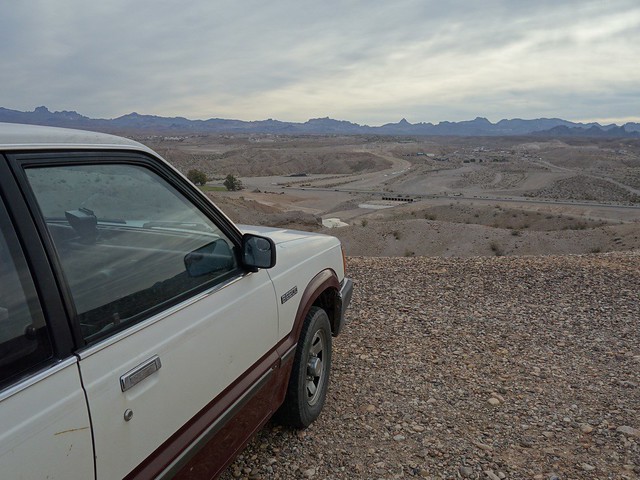 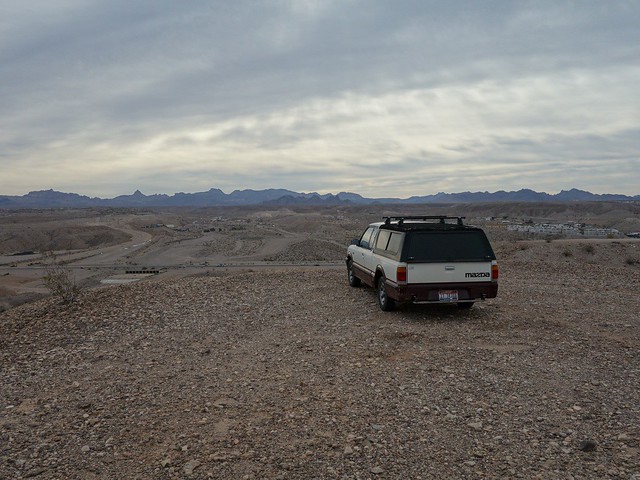 Well, I’ve certainly got the free part down. You’ve got to love a country that allows you to hop in your little freedom ride with a bed in the back and hit the road to anywhere you want to go. And man, am I white! When you walk around other people that look like they live in the desert, (I guess because they do), you sure feel a touch out of place. As to the 71, I figured I better hurry up and do this post now, just saying…

I ate a great chili dog tonight at a Wienerschnitzel (remember those). It was a Chicago style, beef dog, with chili and onions, and jalapeños. After that I stopped at a Safeway (remember those) for tomorrows fruit, and cheese cake with coffee ice cream for tonights desert.

I also started on my tan so when I hit the Pioneer pool tomorrow I won’t blind anyone. 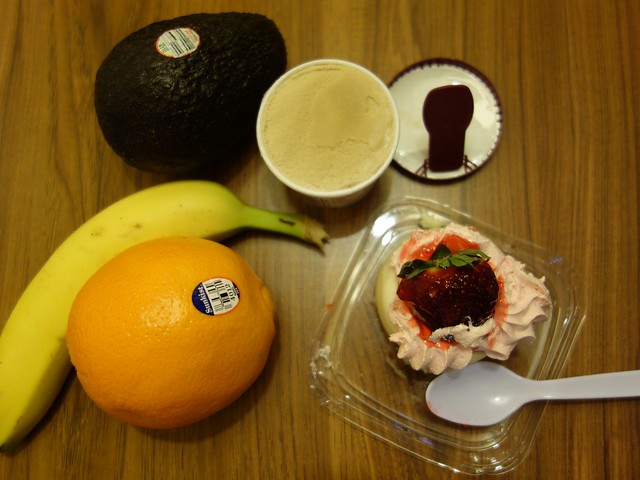 As I was preping supplies for this upcoming trip, Steph asked me what my favorite powder was. Since I consume a lot of powder daily, I asked if she was referring to one of my spice powders: Cayenne, Turmeric, Garlic, Ginger and Pepper, or one of my exotic powders: Hawthorne Berry, Ashwagandha Root, Gotu Kola, Soy Lecithin or Amla?

She said she was talking about my protein powders, Vanilla or Strawberry. Oh, Vanilla.

Anyway, more power to get here: 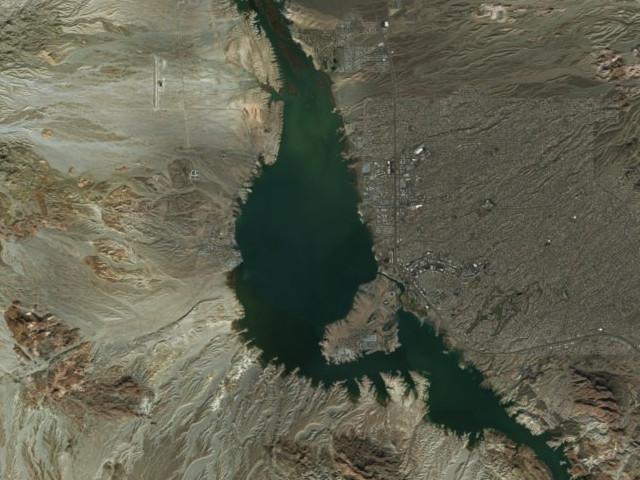 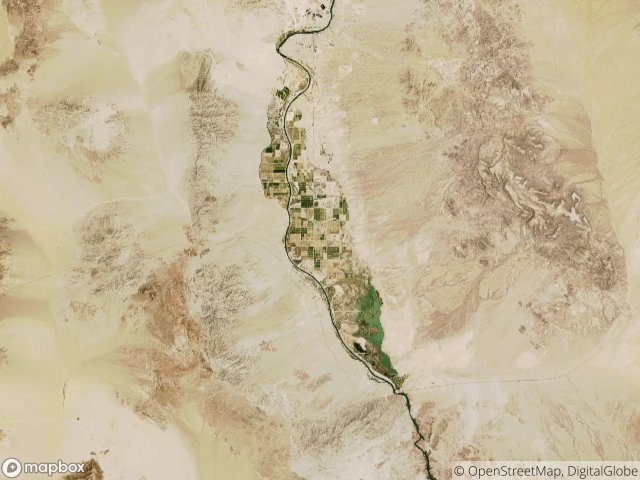 I was getting ready tonight for my upcoming Spring Break jaunt and I threw some old travel bags into the corner of my closet. It’s amazing what cats find comfortable, and as I write this, she’s still there. 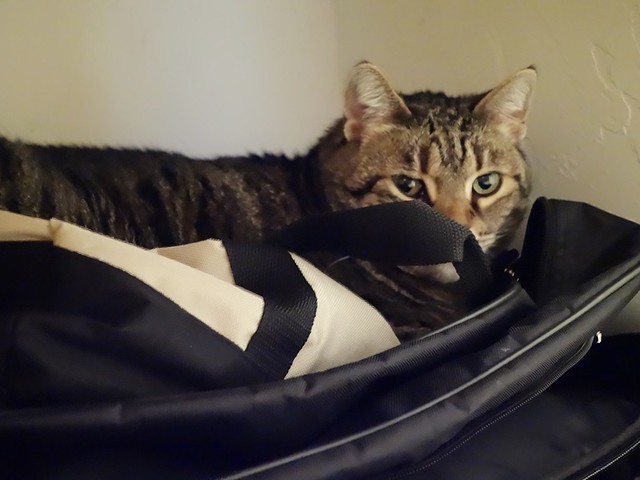 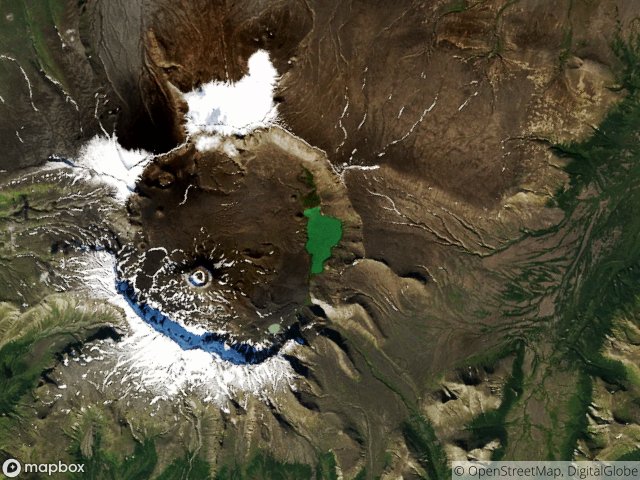 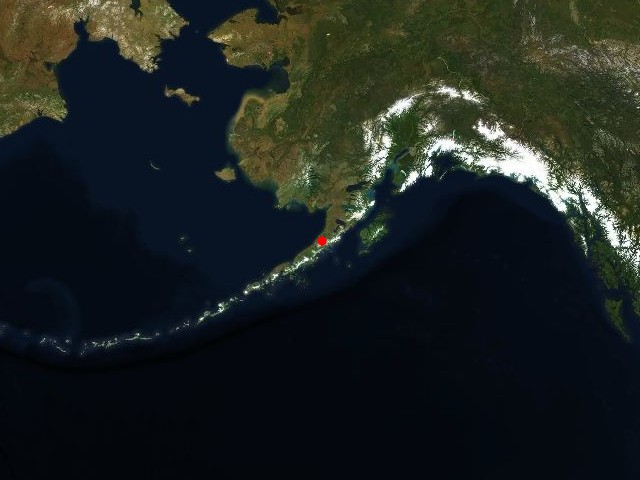 And of course, it’s a painting: 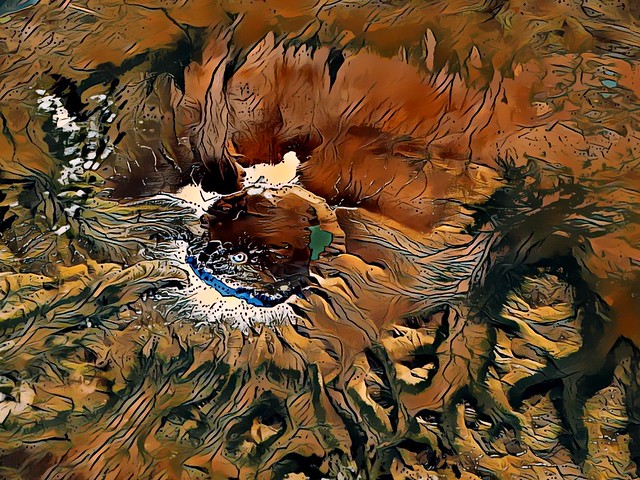 It’s funny how one can have a debilitating disease and yet be in the best shape of their lives. I think my body literally slaps modern medical crap up side it’s collective bullshit head. I have Parkinson’s. It runs strong in my family on my dad’s side and my brother is suffering from it full on.

A few years back I felt it coming on in weird ways but my diet and exercise program has pushed it back to only one symptom, I can feel it rushing through my body. It’s like a freight train pounding through my blood vessels and in the quiet of night as I lie in bed, it’s really loud.

I’ve come to embrace it as a form of energy, as opposed to a disease. It no longer worries me, it just pushes me forward now…

Many years ago, late one night, I was sitting in a rundown one room apartment in Renton, WA, writing some C++ code. It was my first C program (I usually programmed in Assembly or RPG on the minis), and I was pretty stoned and getting down on it. It was an astrology app that a Bay Area friend of mine commissioned me to write for a few bucks. I had a crushed ankle from a fall and money was scarce, so I took it.

It was a pretty cool app, using all of the tricks of the astrology trade to come up with a series of numbers based on your name and birthdate. The numbers could then be compared to a database of famous people and you could see who comes close to yours. My birth name is Leigh James Riza so that’s what I plugged in and when I scrolled the screen down to see who was close, I literally fell out of my chair when I saw the results.

I’ve always had an affinity for Vincent Van Gogh and I had read everything about him I could get my hands on. I related to him as the tortured artist who was never recognized for his work. I still relate to that…

So, my mind was blown. I ran across this printout the other day and I’ve named it Carma as a union of Coincidence and Karma. 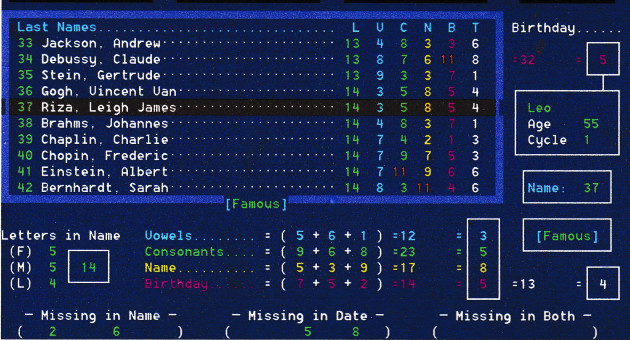 My sister found my grandmothers old crocheted afghan and asked me if I’d like to have it. Her old blanket occupies a proud spot on the top of the bed in the back of my truck, so I told her absolutely yes!

It’s in perfect shape and I recall it from when I was a kid, which makes it really old. 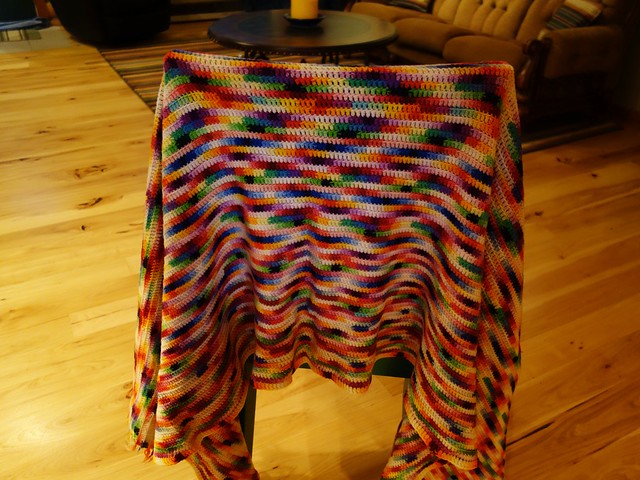 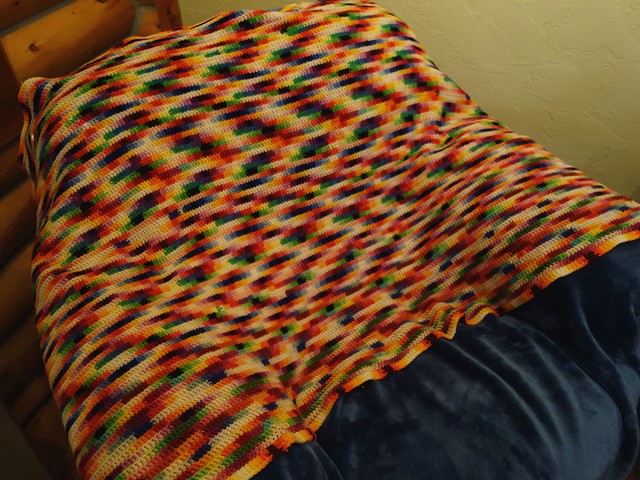 Somebody spent the night outside my office. Mr. Moose I presume. 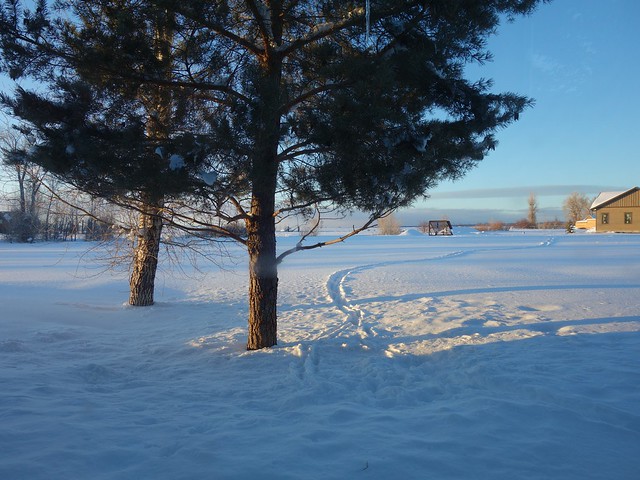 Although, if I was naked on Blacks Beach right now, I wouldn’t even have noticed… 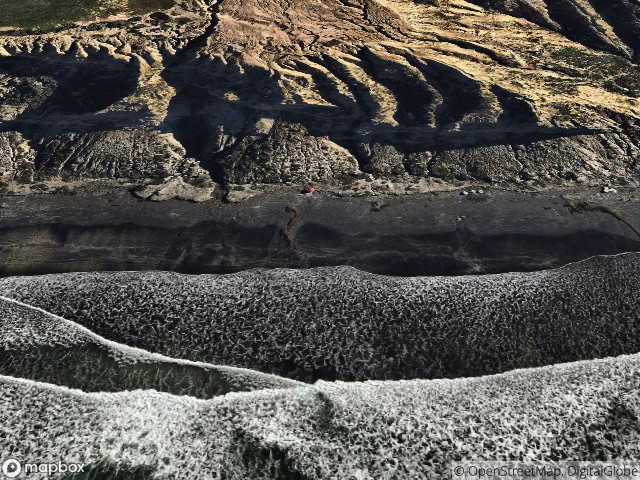 A meteor crater in Canyonlands National Park. Click the crater to see the PermaLink… 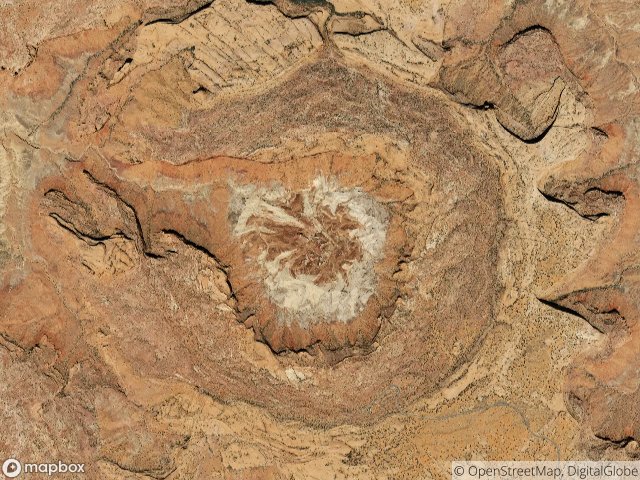 Here it is painted: 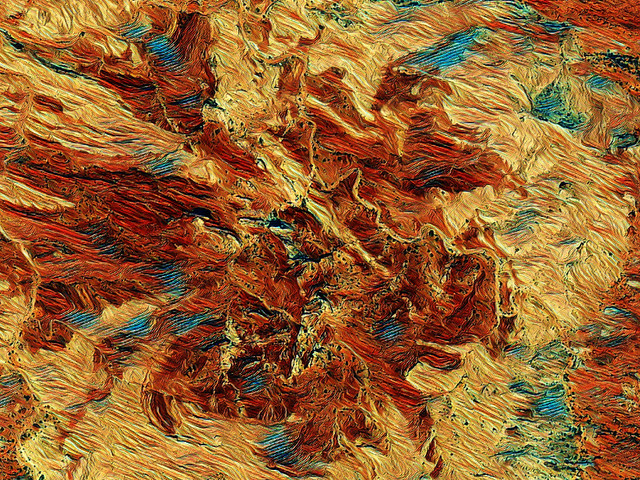 It’s been a nice mild winter so far and I really thought I was going to escape this place without having to deal with, this… 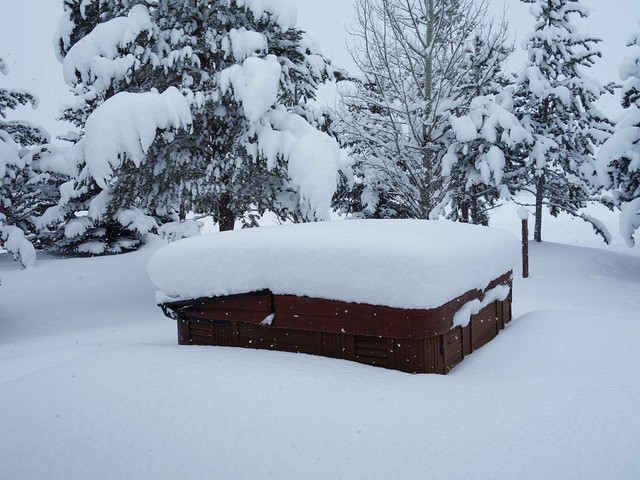 I’d rather be on Fort Jefferson at Dry Tortugas National Park: