It was a beautiful Halloween afternoon in the heart of the valley today as I headed back to Hwy 33 along South Bates Road. I mounted my big clamp on the dash of my bus, set the Cube on it, and started recording.

It was a totally un-interrupted drive until the end when a couple of good old boy rigs came around a corner. If you have a little time, kick back and enjoy the kinds of things I see on a regular basis around here.

The Cube maxes out at five minute segments and starts a new one after. I’m merging them together with the Divx Converter and there’s a short gap in audio when they connect. I’ll just call this my signature effect.

Update: As our ninth Halloween here comes to a close it’s now been eight years since we’ve had a trick-or-treater come to our door. Maybe it’s the shotgun hooked to a tripwire, highlighted by a spotlight…

I’ve been handing out the Halloween treats the last couple of days and my idea to suspend the basket above the kids heads has worked well. The veterans (i.e. kids who have ridden in previous years) are hip to what’s up there, they know goodies await at the end of the ride. The new kids didn’t even ask about it but the look on their faces as I pulled bags of candy out of there and gave it to them, priceless :-) 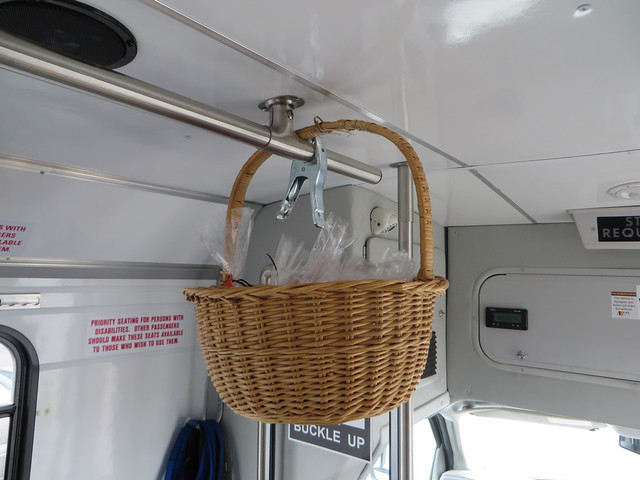 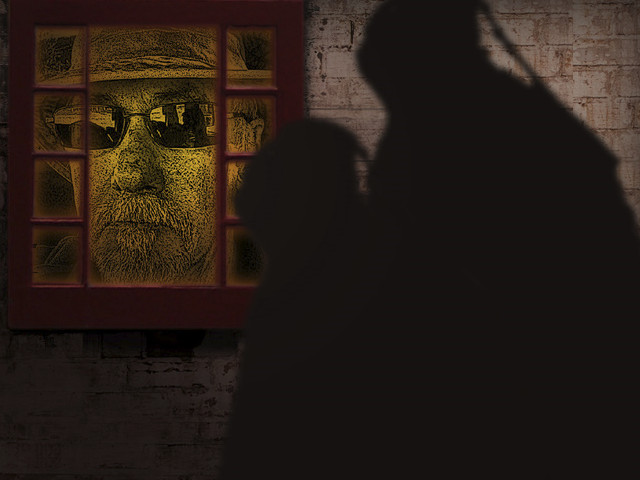 I’ve been really frustrated lately by the fact that I couldn’t force embedded iframe YouTube videos to start in hi-def mode. I’m uploading in 1920×1080 mode which should playback in 1080p, but they default to 300p.

Screw that, I’m a computer programmer, so I dove into the YouTube Player API and wrote my own player. Here’s a short little video using my Cube on its Wheel moving around our living room tonight in hi-def, played back with my new player:

I find it interesting that real computers (you know, windows/intel or mac) will playback 1080p, but tablets and phones opt down to the lower resolutions. Do they feel inferior? 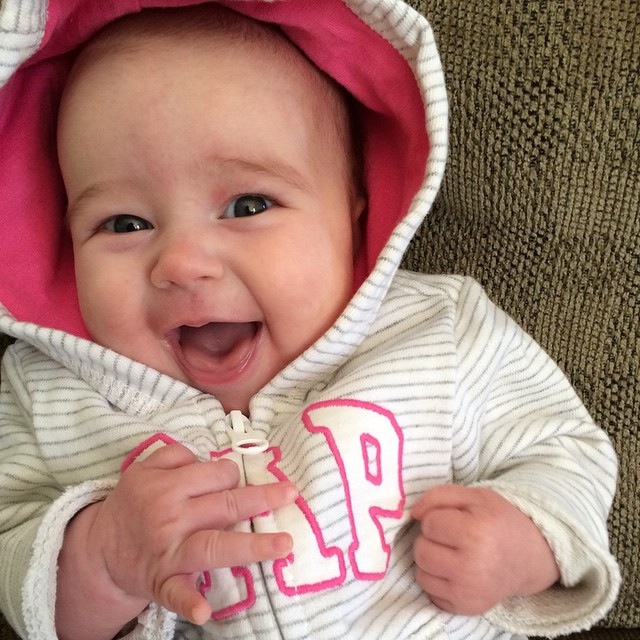 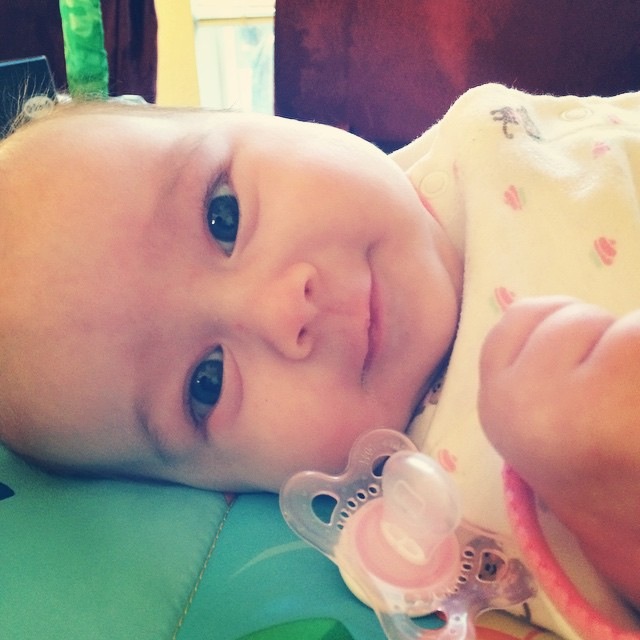 So is her dad… 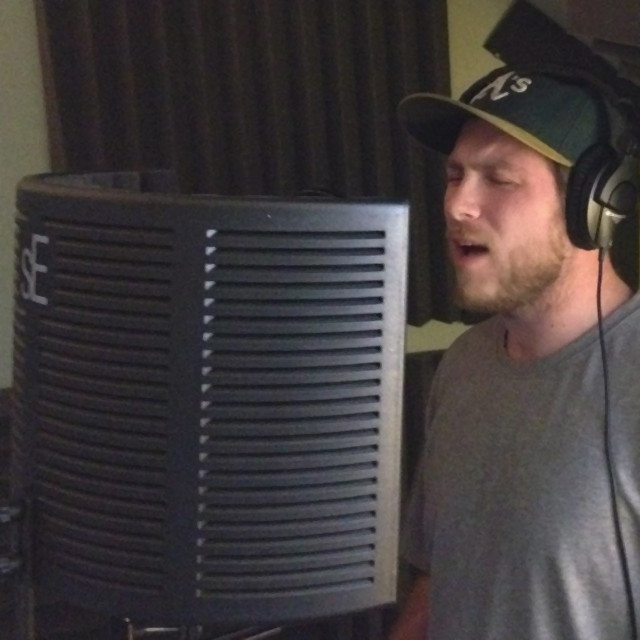 I guess I’ve voided the warranty on my Polaroid Cube as I had Steph paint it black. We striped off the colorful stripe and her excellent hand-eye coordination converted the soft blue color, to nothing. They should offer this as an option. 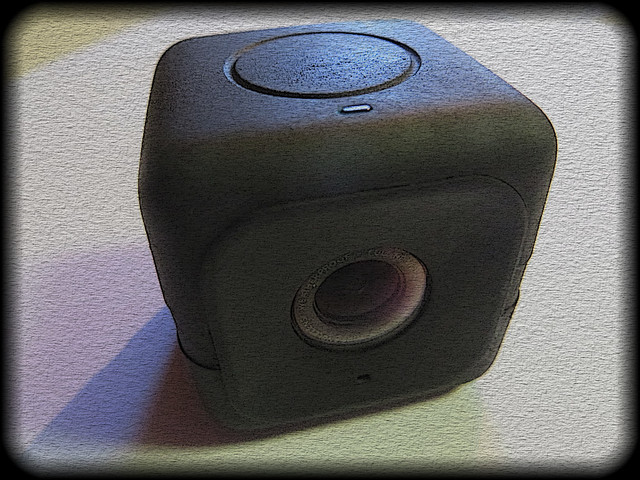 If I had gone with Plan A today I would be sitting down at Idaho Falls sucking up overtime while learning about Alzheimer’s at the Shilo Inn. Karen and I could have jumped in a bus and blown our whole day down there but she had to golf and I had projects to work on. Screw the extra money (sigh…)

Steph’s project is leaves, lots of them. Blowing, sucking, raking and stacking, that’s her game and she’s damned good at it!

Me, putting plumbers epoxy on my Cube Wheel to lock the parts in place and stop the dampening effect from the wheels shock absorber was number one. I’m also painting my Cube camera black but I have to use a brush as spray paint would kill it. There is also some killer pulled beef I’m cooking up out in the garage for dinner tonight that needs tending to.

And finally, I’m running back and forth into the office to finish up the coding of my new YouTube player that will let me play HD video on my blog. 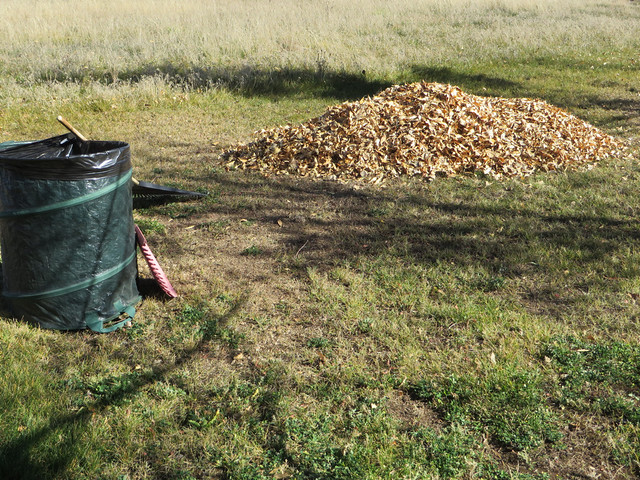 I’ve had some pretty cool commutes to work over the years, the best was probably the drive from my place by the beach in Pacific Grove, CA (by Monterey) up to Carmel Valley via Hwy 68, which paralleled 17 Mile Drive, which rolls right by Pebble Beach.

Sometimes I’d take the drive in my little sports car with the top down and it was the kind of adventure that tourists drove thousands of miles to experience, and I could do it whenever I felt like it, on my way to work.

But I digress… That commute was twenty to thirty miles, depending on the route, and now my commute is 2.3 miles from my garage to the base. It’s still dark at 0710 when I leave and I rarely encounter other vehicles, except maybe a Start Bus leaving the base roaring down 5th Street throwing dust in my face. Come on, ride along!

Did you know that on July 29, 2005 the U.S. Congress passed the Energy Policy Act of 2005 which, among other things, extended the length of Daylight Savings Time.

Guess who lobbied Congress the hardest for this change, the Candy Industry! A one-week move, from the last Sunday in October to the first in November, allowed for an extra hour of daylight each Halloween, which added millions to their bottom line.

We’re being played folks, you all know it, you just choose to let it slide. All of these feel-good traditional U.S. holidays are about money going from your pocket, to theirs. The Thanksgiving and Christmas holidays, plus the after holiday sales, generate billions of dollars for thousands of industries. This also applies to Mothers Day, Fathers Day and Valentines Day which are all about spending money…

Here are my solutions to the Thanksgiving and Christmas nonsense:

•  Choose your own family gatherings and make a tradition out of it. Why be forced to travel and spend money around two days of the year where everyone else is doing the same thing?

•  Steph reminded me that Christmas used to be all about the kids, and she’s right! There are 316 million people in the United States, with 218 million over 18. If everyone over 18 gave $100 to a Christmas fund for kids (those under 18), each kid in the U.S. would get $220. Set January 1st as the day to give it to them, and then say Merry Christmas.

For those that argue that Thanksgiving is based on some pilgrim tradition and that Christmas is a religious holiday, all I can say is, Really?

Which leaves Easter and Halloween. I had a tradition with Riley where every Easter morning I would go out early and hide a basket of goodies out in the woods and then leave plastic eggs with reverse engineered clues back to his front door. I would wait down by the basket and watch him follow the clues to it. Great fun, and it could be called Find The Basket Day. Skip the candy and convoluted messages about giant rabbits and Christ rising from the dead!

I liked Halloween as it used to be, where kids went door to door demanding candy and if you refused, you got tricked. I remember the time my brother and I dumped Pete Peterson’s garbage can on his front porch and he chased us down for a half a mile and dragged us back to his house by our ears and made us clean it up. Good times!

Now, it’s just a scripted dance where parents drag their kids around to safe houses and businesses to collect candy in a bag, which is sorted out later for possible poisons, and then the adults dress up in stupid costumes and go to parties and get drunk. Actually, that’s not bad, we do need to escape sometimes…

Carol, one of my regulars, has been commenting lately about this tree that sits on the Joshua Smith group home property by the side of the road. I have to hand it to the girl, she knows how to spot the beauty in trees and has proved it to me over the years.

After dropping The Gang off at home this afternoon I walked over and took these shots. 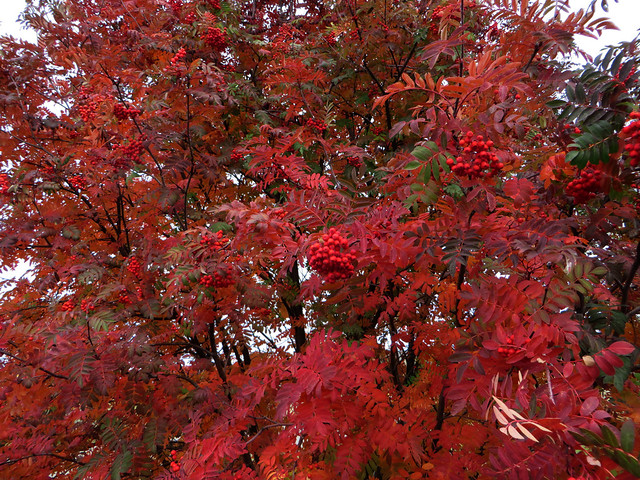 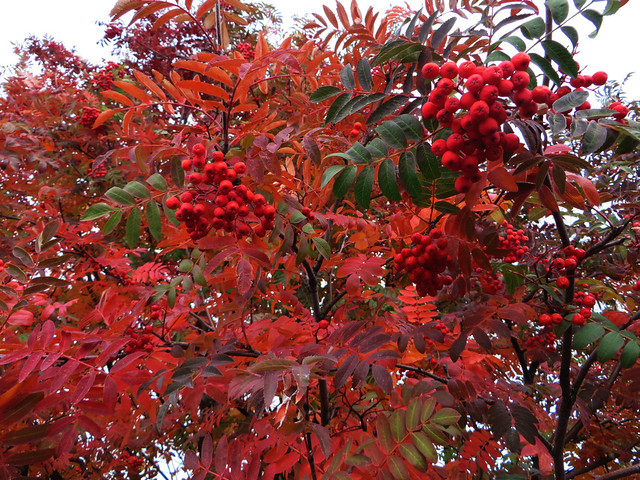 Riley’s old mountain bike has risen like the Phoenix to become, The Cube Wheel. The bike came with us to Idaho and I’ve ridden it twice, both times unpleasant. It was old, outdated and heavy and has been hanging on a hook in our garage.

Today I stripped the front end out to create a device for taking smooth rolling video shots with my Cube camera. This idea came about when my sister mentioned the camera would be good for making videos of the inside of her rental properties, and I know from experience that walking around with the camera in your hand introduces bounces from your footsteps. 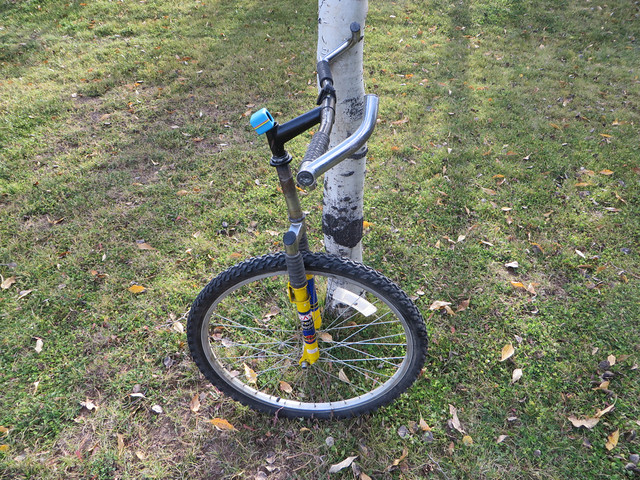 The Republican tour bus was in Driggs today, parked on the north side of the Community Center. As I was taking these shots a guy off the bus started chatting me up. He’s a volunteer and rides around on the bus, doing whatever they need. This guy was walking and talking his political line so much I don’t think he even knew where he was.

I told him I was an ultra right-wing conservative and shared a lot of his views, but that didn’t stop him. I asked him if the Governor was around and he said that Butch and his security detail had recently veered away from the convoy because he had a cold and wanted to hunker down.

Update: Butch Otter did show up.

Now, this is not a political blog, so I won’t linger on the subject anymore, except to comment on our upcoming County Commissioner election involving two Republicans:

I voted for Kunz but that good old boy has done a horrible job, and needs to be fired… 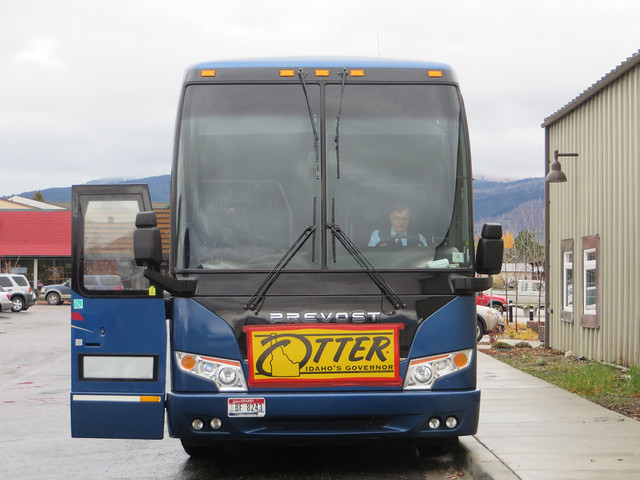 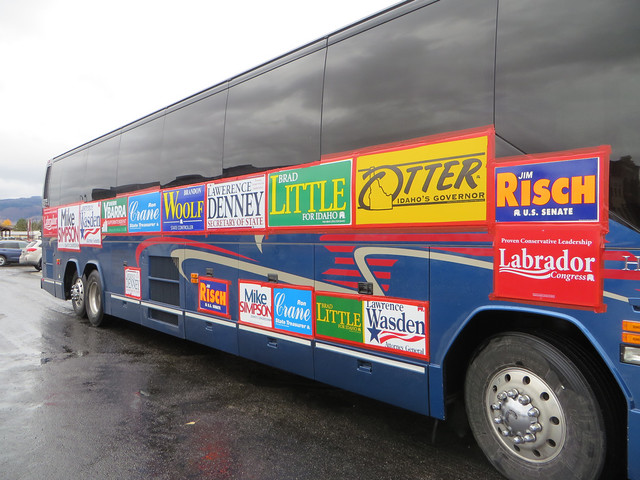 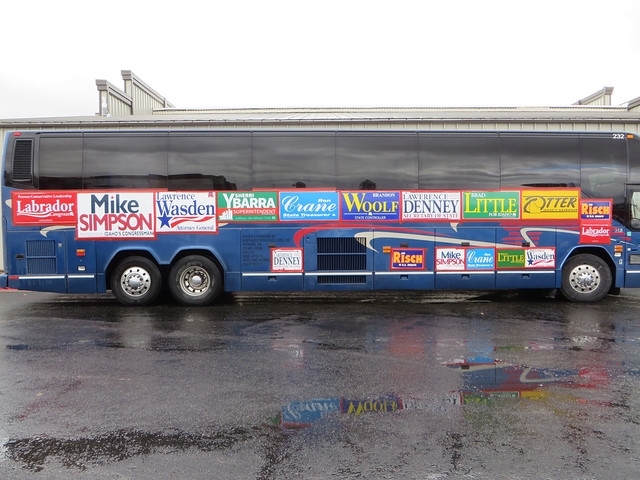 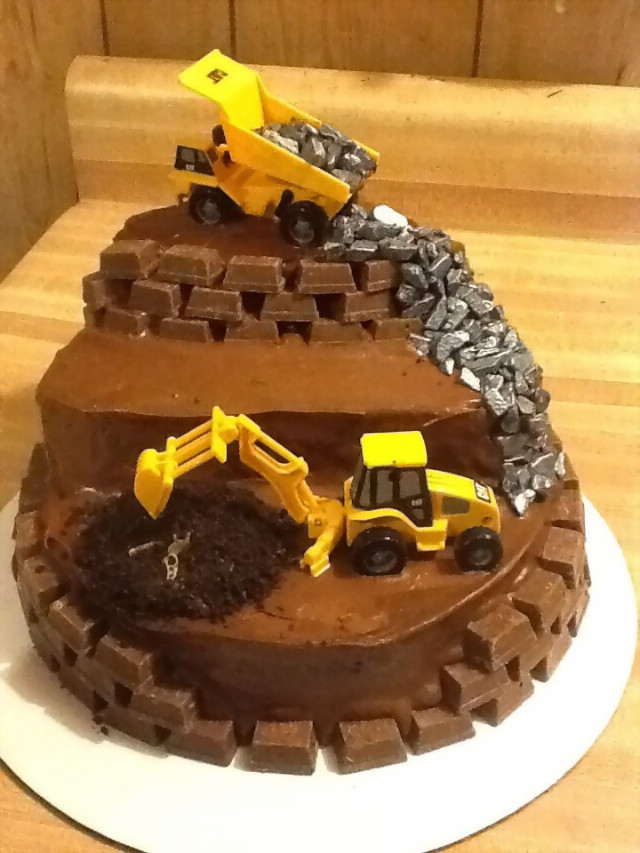 This is the most intensive cross stitch project I’ve ever witnessed Steph do. It’s a counted cross stitch design that uses both full and half stitches, titled Silent Flight. I can’t remember when she took it over from her daughter in it’s infancy, but it’s been months, with countless hours invested!

The project is finally done, matted and framed. Instead of going on our wall or sold at an art gallery, she’s shipping it back to Melissa. My photo doesn’t do this cross stitch justice as I cropped it within the frame for the blog. The finished work is much more expansive and colorful in person. 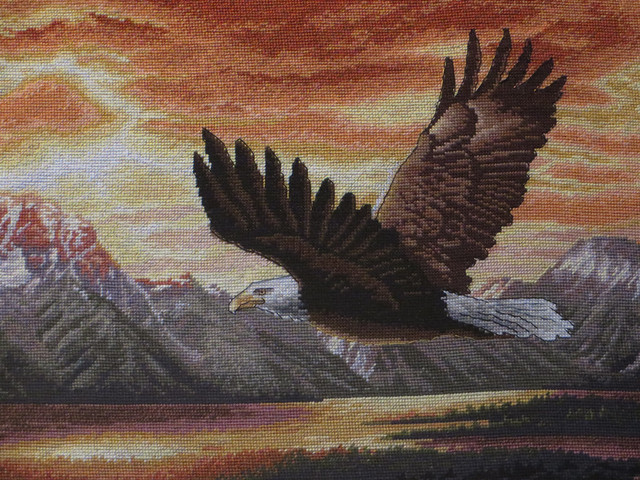 This should be a great Sunday, high up here in the Rockies. We started the morning off with a joint kitchen effort on some Crab Cake Benedict’s that turned out as good as they look. Next up, I’m whipping together a camera mounting device for the front of my truck and taking a drive down Hastings Lane.

If all you see here is Mr. and Mrs. CC Bennie, drop by later for what I hope will be some spectacular footage of the Tetons and Alta, Wyoming. 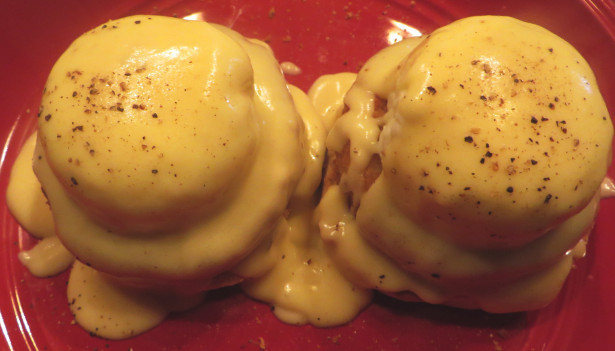 Here’s the improvised Cube mount I just came up with. It’s a strong metal clamp inserted under the lip of the hood with padding on top and cardboard inserted firmly underneath. The magnet on the bottom of the cube is strong and this works great. 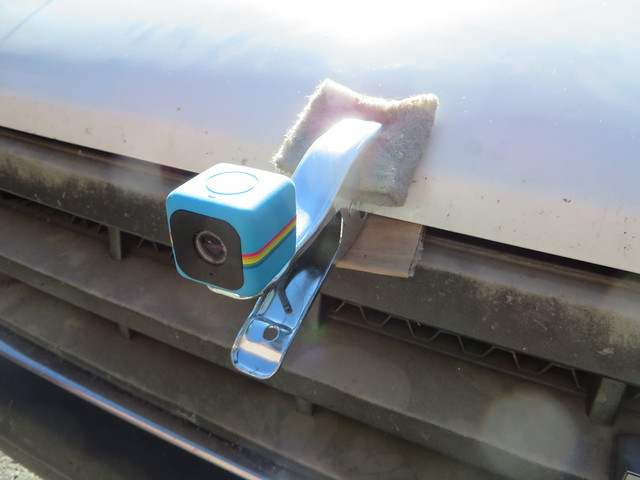 I took a drive on Hastings Lane heading towards the Tetons to test my new mount out. The sun was messing with me but it came out pretty good and parts 1 and 2 are below. Once the videos start, click the gear icon and select HD.

While moving my tripod around the lawn with the Cube attached, it fell off in the grass. When I finally found it there was video recorded, along with some strange stuff…

Here’s one final video for the day. I set the Cube on 720P, plopped it on the mount and took a drive around our subdivision. Sorry about the overflowing garbage can, damn neighbors anyway…