I left Eugene early yesterday morning and drove to the coast. It was foggy but I’m used to that, I used to live in Monterey. The first place I spotted with access to the ocean had a signboard up that indicated only people with a Recreation Pass could walk on the beach. Sigh… Turns out that the Senior Pass I bought at Yellowstone a few years back was honored so I threw it on my dash and went down and touched the Pacific.

The sun came out, I mosied up the coast, caught some rays and had a great day. Oh, and you know the drill, click the photo below to see the pictures… 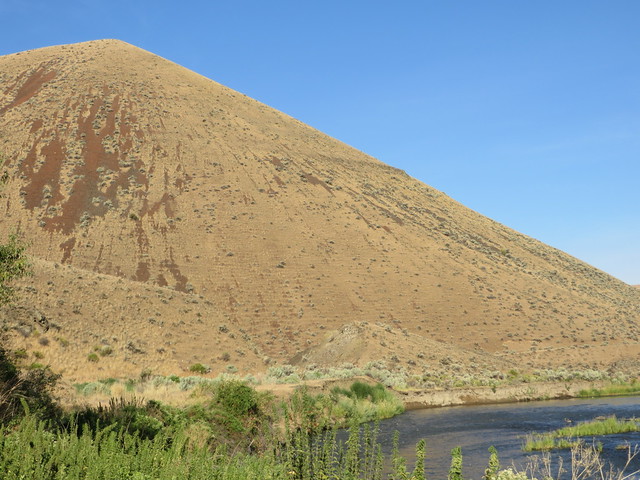 Here’s a video of me making contact with the ocean:

The synergism does not escape me.

Tomi (my GPS) plopped me smack dab in downtown Eugene Oregon an hour ago and I grabbed the last room of the first motel I encountered. I ate my second night of happy hour food (crab stuffed mushrooms) at the Ambrosia and then walked around town. Click the photo below for my photoset: 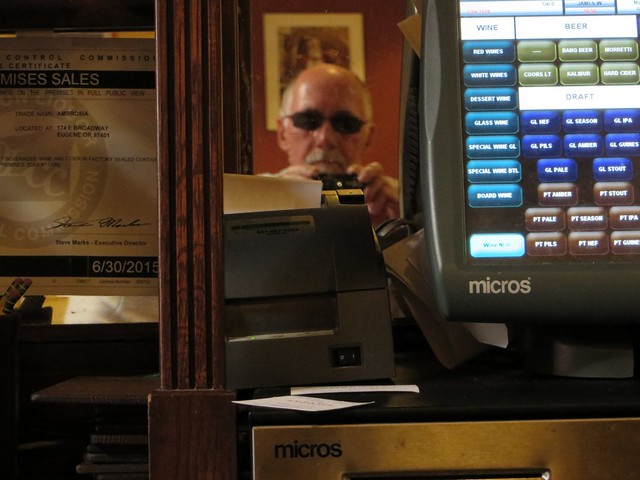 Here’s some more photos from later in the evening: 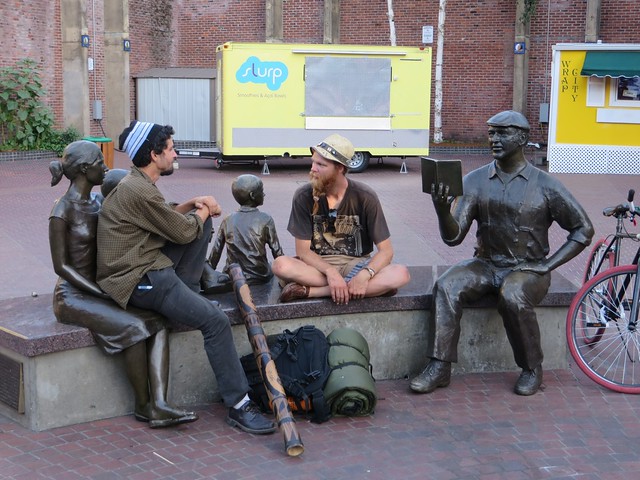 I put a post up on Craigslist/Rideshare yesterday indicating I was heading West this morning with a stop in Boise. A guy named Chad wanted me to call him urgently but didn’t included his phone number. Sorry Chad, not sending you mine :-) A girl in Rexburg said she needed to get some tripods from Rexburg to her grand-daddy in Boise. I told her to meet me at the Walmart at 0815. One other offer came from a couple with a name that sounded from India needing a ride to Boise. I emailed back that my little extended cab has one passenger seat with a fold down behind and if they’re small people they can take turns. Told them to meet me at 0815 at Walmart.

I arrived at 0815, nobody there. The phone rang and it was grand-daddy in Boise, an old guy, older than me. We agreed to set up a meet as I approached Boise and shortly after the girls husband showed up with the stuff (two wooden tripods and a mysterious plastic box). I shook the guys hand and thanked him for trusting my integrity. The couple never showed up, and I hit the Oregon Trail.

The transfer went off without a hitch in a Boise Target parking lot and I made $25. Hey, I do drive for a living! I’m currently hunkered down in a roadside motel, planning tomorrows adventure…

Update: I mosied over to a local happy hour and had four hard baked potato skins stuffed with pulled pork, cheese and sour cream, for $2.50. Dinner!

Two years ago on July 23 (my birthday) I was hanging out with Skoge and Grant on their couch in The City. A major solar storm was taking place at the time and fortunately it missed the Earth, otherwise my return trip to Idaho could have been dramatically different.

I used to drive a pretty swanky ride back in my days as a Metro Paratransit Supervisor in the south Seattle area. 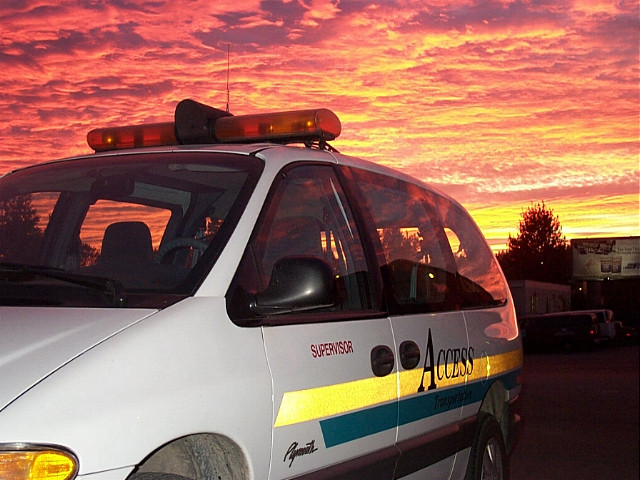 I really don’t know what happened but over the years I kept accumulating stuff, and they finally took her out of service… 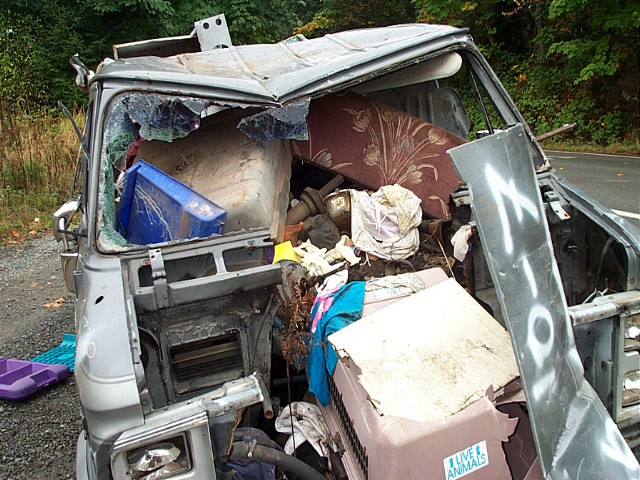 I created a great map this morning that shows the Teton River, within the context of Teton Valley, along with the tributaries that feed it.

It’s a Google map so obviously you can drag and zoom. Click anywhere on the map to place a marker and then click on the marker to open a Bing map at that location. You can even drag and drop the marker to another spot, if you want :-) 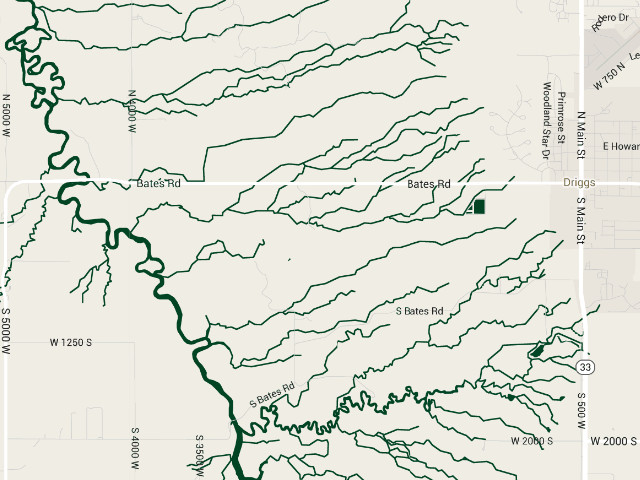 There’s been a hitch in the giddyup. Apparently a few mosquitos spent the night with me in my truck at Norris and had me for dinner. I’ve skipped the last two legs of this latest trip to Calamine up. Oh well, there’s next week :-) 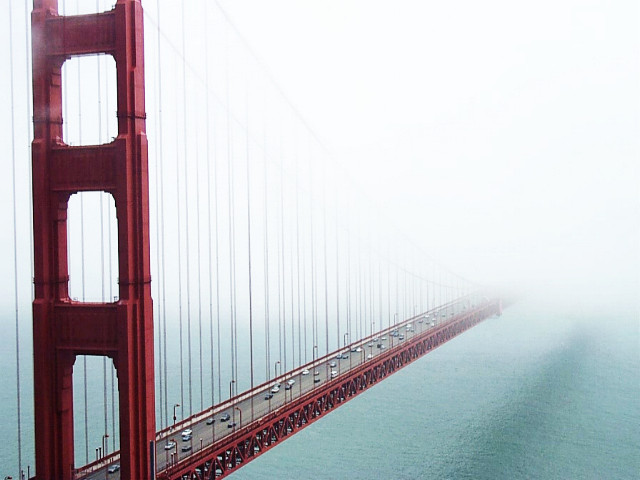 I snagged a nice room in Billings today but I had to wait for it to be cleaned. I parked my truck in their lot and walked around a bit and when I got back their manager had placed a canister set up on the counter with a $65 price tag on it and said Buy this for $25 and I’ll try to speed up your room. He didn’t know I hang with a container freak.

But just to be fair, the first person to request this item via comment, gets it.

I walked downtown this evening to check out the Thursday Night Music event. As I approached the stage, people came up to me and asked if I was going to take advantage of the $3 drink specials there, and if so I needed to wear a special bracelet. Excuse me! I’m a regular in this town and I know the Casino a block away has $2 happy hour drinks. Keep your stupid bracelet! I did have a $5 Mexican food special though… 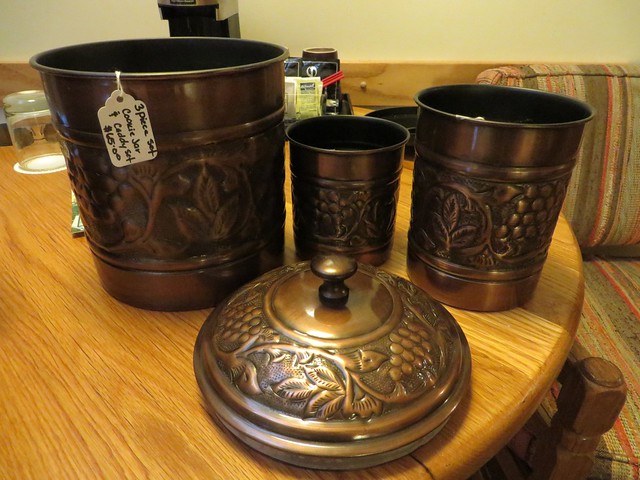 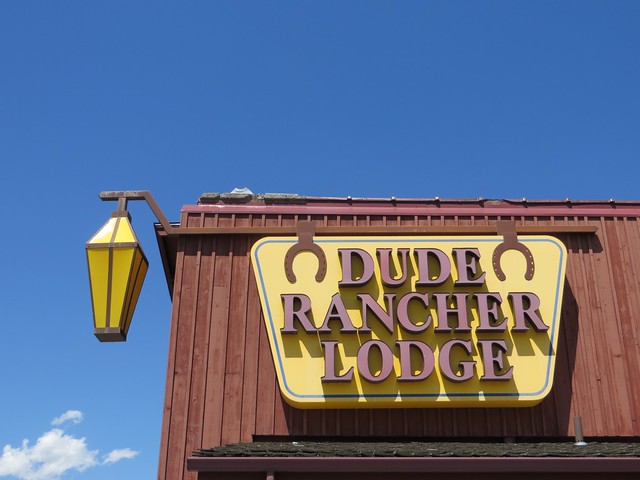 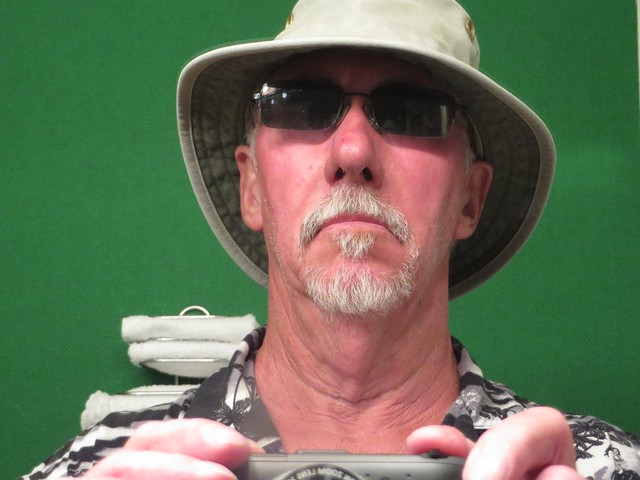 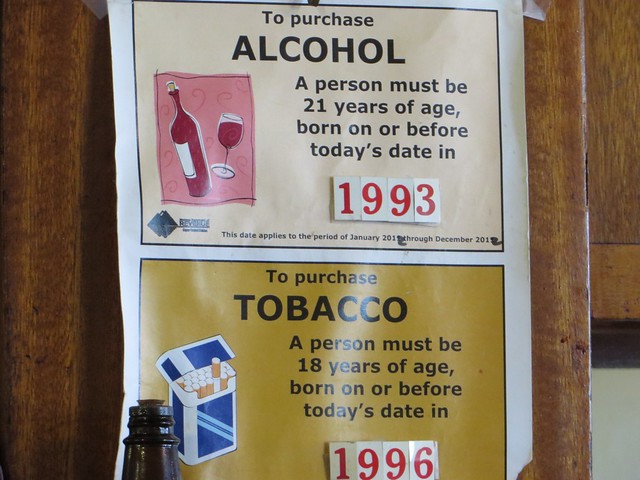 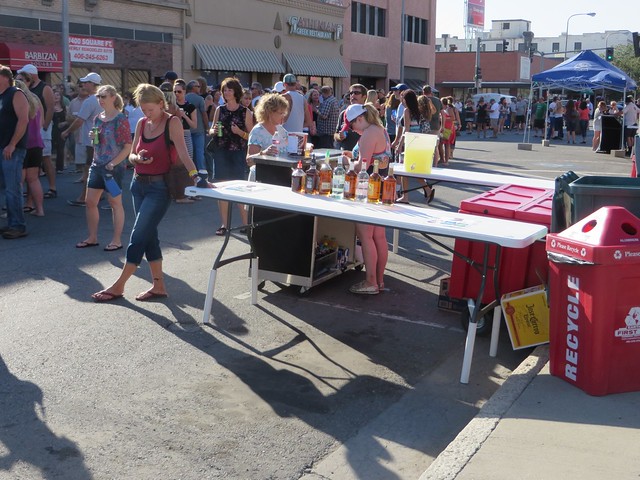 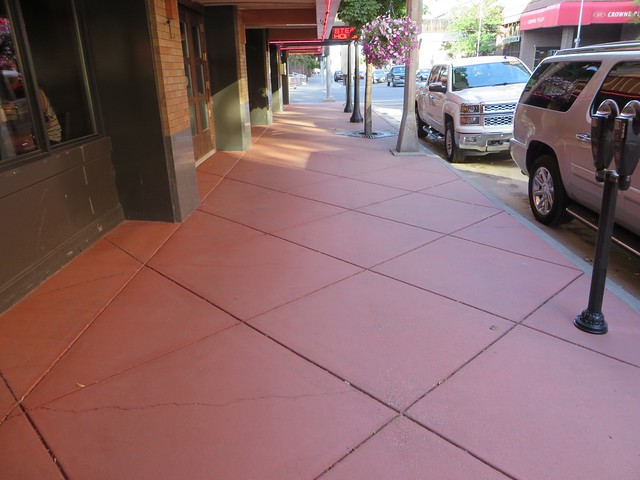 I love my little truck… 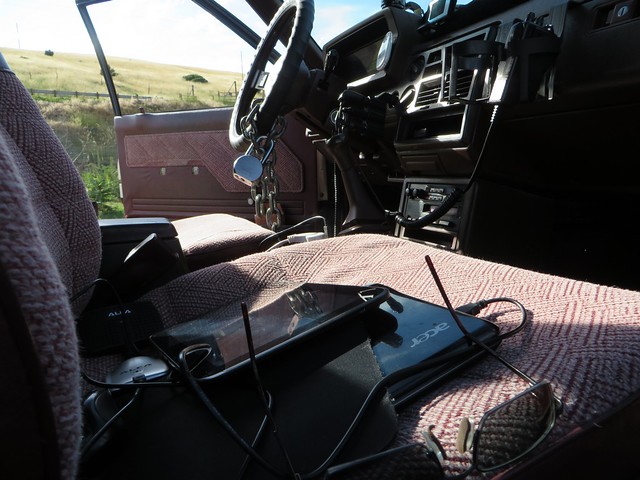 Happy Birthday to me. I’ve treated myself to Norris Hot Springs today and the weather is beautiful and the Water Of The Gods is healing. I’ve just come back to camp after a great soak.

I snagged spot number 10 again and since it looks off into uninhabited grassland I pulled down my shorts and I’m doing a combination dry.

What a way to turn 68! I never thought I’d live this long much less still being in shape to do it. Thanks to my relatives residing in the cloud, you know who you are! 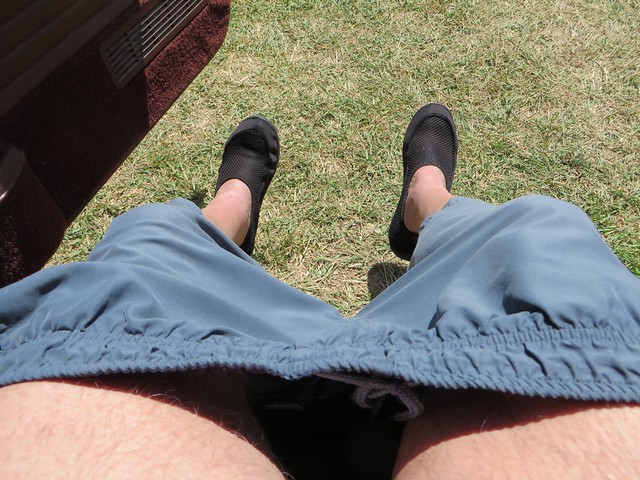 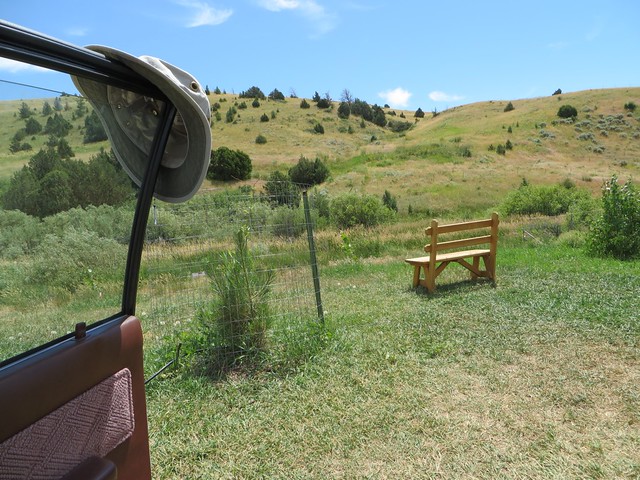 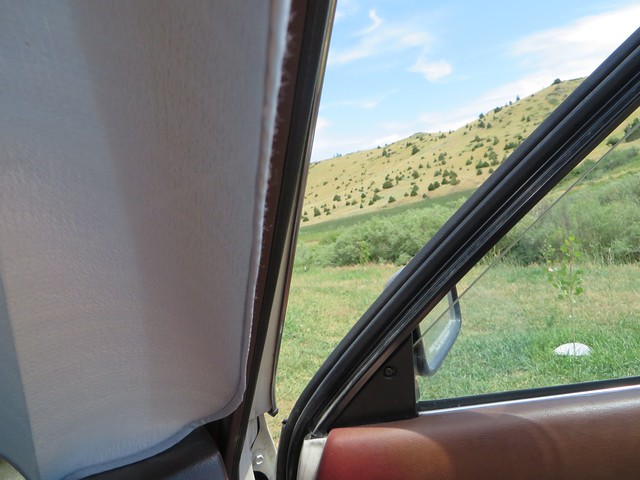 Tomorrow I embark on my next summer vacation jaunt, up into big sky country. I’m choosing this initial northern leg because my back hurts from pulling fence at my sisters house on Sunday and I figured the Springs would be a great place to turn 68.

On into Billings on Thursday, just because I like the town, followed by Butte on Friday where the Evil Knievel Festival‘s going on and then landing in Missoula on Saturday for the Farmers Market.

After that, probably down into Oregon and over to the Pacific…

This post also introduces my new app called Ploht (.com) which I wrote to facilitate my travels. Click on the map markers for more options.

…and, you can see all of my routes here and all individual places here.

The dry farms between Newdale and Tetonia often have these grain clumps that reminded me of my blood pressure as I returned from my DOT physical in IF today.

New tougher standards are in place but I’m pleased to say my CDL is good to go for another two years. 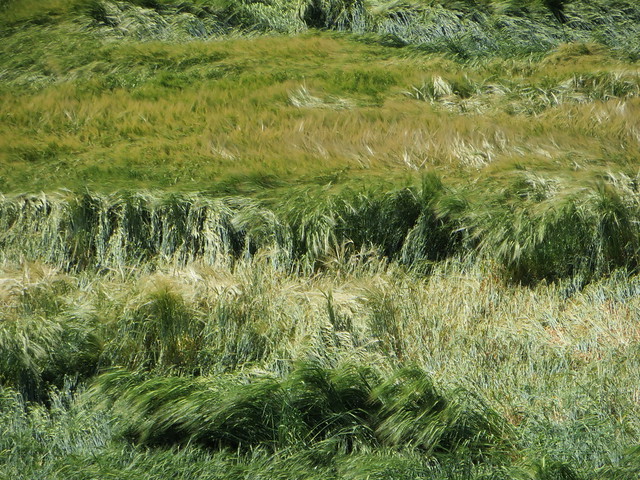 We’ve lived here for nine years and our septic tank has never been pumped out. There, I’ve said it. We be bad…

That situation has now been corrected thanks to our local boys Craig and John from Valley Septic. We had no idea where the tank was but Craig estimated about eleven feet from the wall and struck the lid with the first jab of his big metal stick.

This post is full of shit but you know you want to see the process so click the photo below, or move on… :-) 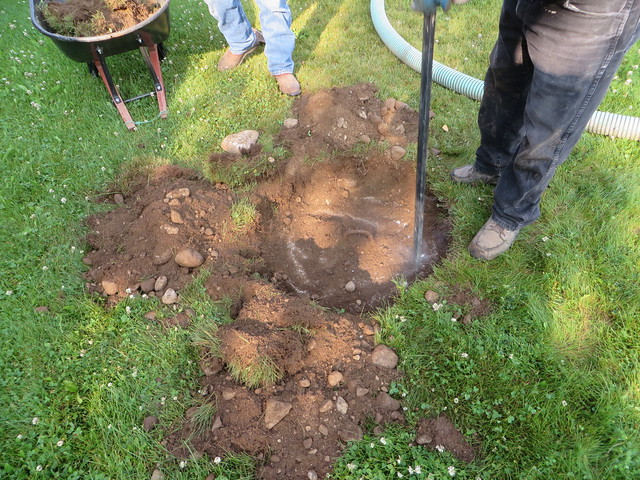 I owned three ’51 Fords in my youth, two flathead eights and an inline six. I held my own, dragging the strip in Chico, CA mid-sixties with my eights, but eventually blew them all up. Here’s a ’49 Woodie I spotted up in Victor today along with some cool old rides. There’s also a Shelby Cobra engine in the photoset that I’d love to mount in my truck, but there goes the mileage :-) 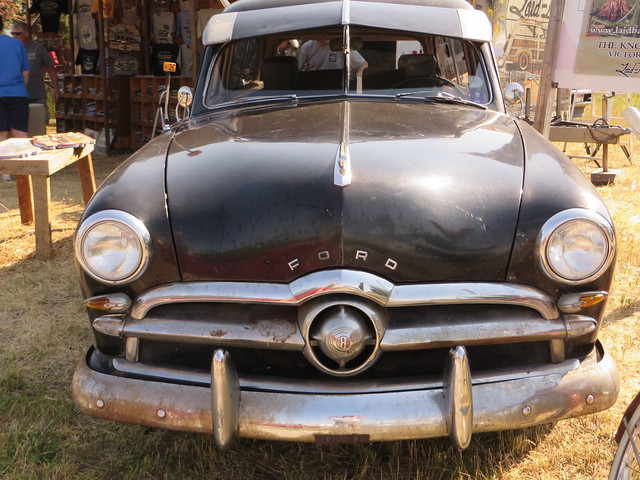 Our Farmers Market has moved to the new area in front of the GeoTourism Center, also now known as City Center Plaza. It fits in there well and seems a little bit bigger.

I bought some local organic eggs today along with some local organic goat cheese and then took them home and made a sandwich. The product photos speak for themselves but the fried eggs are covering up a thick layer of cheese underneath.

Oh well, it was delicious! To make this perfect I should have used local bread and local mayonnaise. Next time… 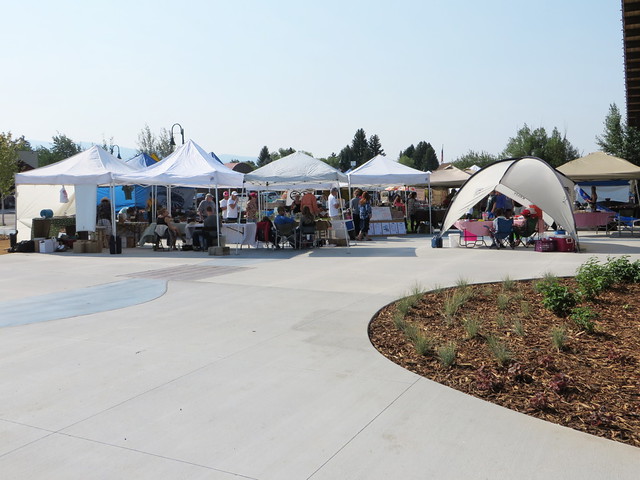 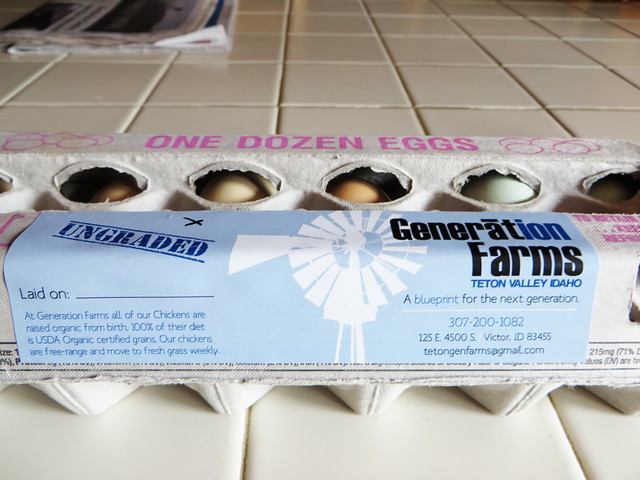 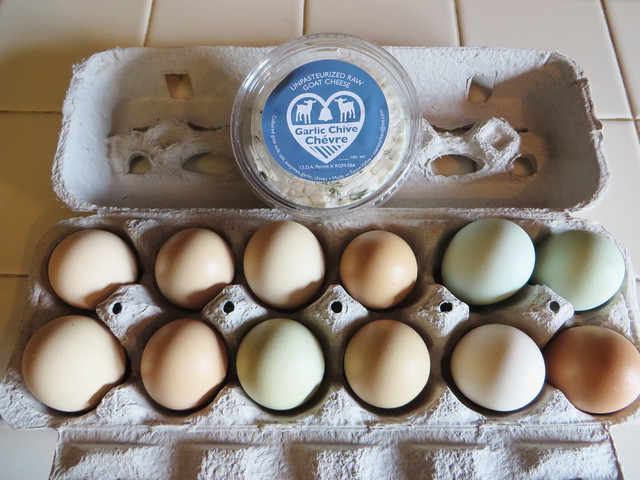 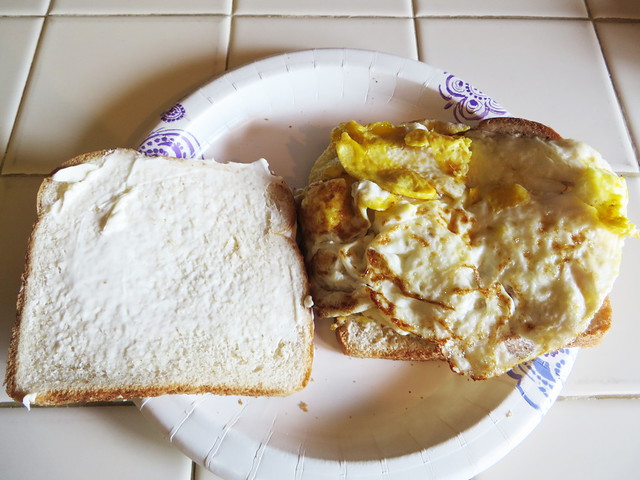