The reason I laid over in Logan, UT last night was so I could be in Hyde Park (just up the road) at 0915 this morning. I’ve been in email contact for a month now with a guy that deals in used truck toppers and canopies. His shop is in Hyde Park and while I was down in Laughlin I got a cryptic email stating that he had found me a topper.

From the motel last night, I sent him an email asking for a good time to show up and he replied 0915. That was his email response, 0915. This guy hasn’t communicated much other than short incomplete sentences and I felt like in was a drug deal. I had seen his shop from aerial map views and when I showed up this morning it was a real shop with toppers all over the place.

The guys name was Jim and I liked him. He sent his young assistant out to fetch my topper and the boy had it solidly installed on my truck within twenty minutes. It’s for a 1989 Ford Ranger (almost the same truck as mine) and was a bit larger than my old one, in great shape, with a rack on top as a bonus.

Our agreed upon price was $250 and as I pulled out my wallet he said cash?, I said yes and he said make it two, and I handed him a couple of Franklins. Deal done, no receipt, and I drove down the road with a great new topper that is destined to become my new camping home this summer. I love it!

Considering that dealers were quoting me $1600+ for a new one, I’m a happy camper, and I’m no longer homeless… 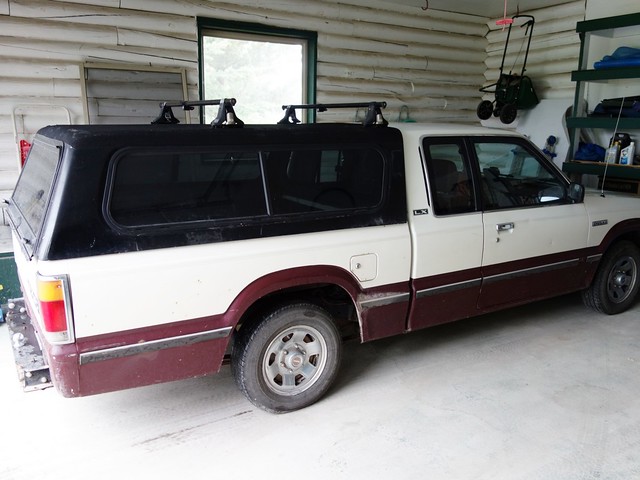 This entry was posted in Vehicles. Bookmark the permalink.